Chelsea vs. Real Madrid: A tale of two powerful figures

As Chelsea and Real Madrid prepare to face off in the second leg of their Champions League semifinal, DW examines the two men who really control these European heavyweights — Florentino Perez and Roman Abramovich. 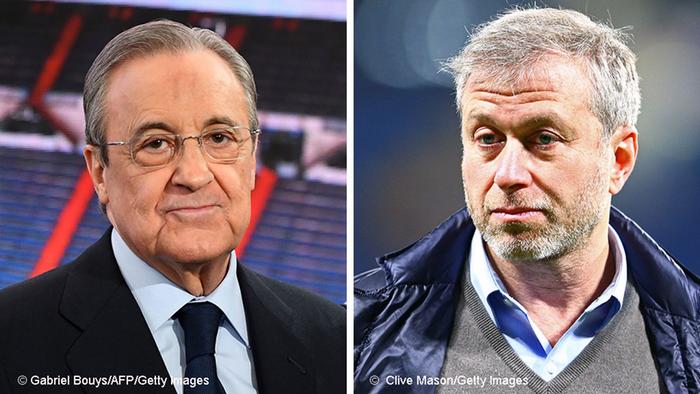 The cameras may focus on Thomas Tuchel and Zinedine Zidane at Stamford Bridge on Wednesday night, but the short-lived European Super League turned the spotlight on the handful of men who are truly in control of Europe's biggest clubs.

Real Madrid and Chelsea are two of those, and both were founding members of the ill-fated Super League. But the two powerful men behind them, Real president Florentino Perez and Chelsea owner Roman Abramovich, have very different reasons for being involved in elite European football,

While Perez was seen as one of the key architects of the Super League coup, Chelsea and Abramovic were among the first to announce their departure, triggered by fan protests outside their stadium.

Good cop, bad cop? Not quite; Abramovich is not normally an owner who seeks a close relationship with his club's fans, despite his popularity. And while Perez is a powerful elected president, he doesn't actually own the club he leads.

The two men have very different visions of the game — even if both are ultimately chasing the same prize.

Coincidentally, both these billionaires started out seeking a career in engineering. A civil engineer by trade, Perez dabbled in politics as a Madrid city councillor and as a candidate in the Spanish general election before moving into the construction industry. He is currently chairman and part-owner of ACS, one of the world's leading construction companies. His net worth is estimated at $2.2 billion (€1.8 billion).

Abramovich too pursued an engineering degree and, following a brief stint in the Soviet Army, began his entrepreneurial journey by selling rubber ducks from his Moscow apartment.

Following the collapse of the Soviet Union, he acquired control of 51% of the oil company Sibneft for $110 million in a series of transactions with certain caveats attached in 1997. Eight years later he sold his stake to Gazprom for just over $13 billion.

The businesses of both Perez and Abramovic have long been closely entwined with politics in their respective countries. Abramovich had close links to former Russian President Boris Yeltsin and quickly aligned himself with Vladimir Putin to avoid a crackdown on oligarchs after Yeltsin resigned in 1999. Abramovich admitted in a UK court in 2008 to having paid billions of dollars in so-called "krysha" or protection money to a Russian businessman.

Meanwhile, Perez's ACS has routinely snapped up government construction contracts in Spain, particularly while José María Aznar was prime minister. As Real Madrid president, he controversially oversaw the €500 million sale of the club's training ground, the site of which then became the city's new financial district, where his company won further major construction contracts.

It follows that the pair's motives for running their respective clubs are not entirely altruistic or solely down to a burning passion for football.

Prime ministers are not the only high-profile guests Perez has brought to Madrid games. On matchdays, he uses the Santiago Bernabeu as his networking platform to strike business deals within and without the world of football. Perez's position at Real affords him a quasi-diplomatic immunity, and he is reported to have once told told Socialist Party politician Matilde Fernandez that "Real Madrid is a Spanish brand standing above the government."

As for Abramovich, it was speculated that his purchase of Chelsea in 2003 may even have been motivated by boredom. After all, a man with a net worth of $15 billion doesn't buy a notoriously capital-consuming object like a football club in order to make more money.

"I don't think the takeover was particularly motivated by making money," Dan Silver, a spokesman for the Chelsea Supporters Trust, tells DW. "Maybe he wanted to buy himself a nice toy set, but he's so secretive, everything about him is conjecture." 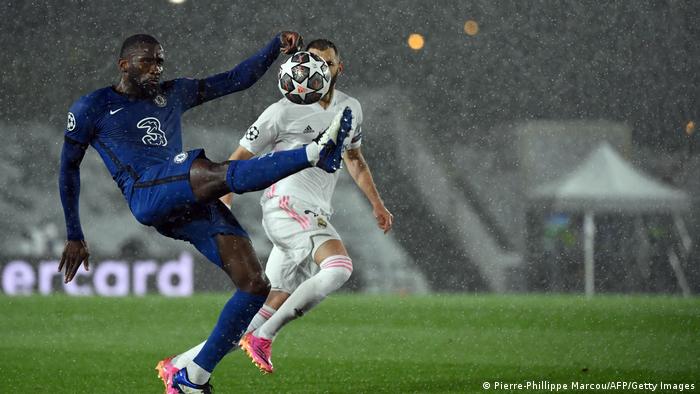 The first leg finished 1-1 in Madrid

Abramovich himself told Forbes recently that his motivation for purchasing a football club stemmed from a fascination with the unpredictability of the game.

"The fact that there is no set formula for winning football matches," he said. "There was so much emotion, so much excitement. I remember thinking, 'I want to be a part of this.' I enjoyed, and still enjoy, the unpredictability and seeing how each game plays out."

Abramovic is not the only wealthy Russian to purchase high-profile cultural assets in London.

In September 2018, Russia's own Federal State Statistics Service found that Russian investors controlled UK assets worth $3.5 billion. The UK's Office of National Statistics put the figure at over $25 billion. According to figures reported by The Guardian in 2018, taking into account Russian money which has arrived in the UK via offshore locations such as the Cayman Islands, it's almost $70 billion. In fact, French economist Thomas Piketty has estimated that more than half of the richest Russians' total wealth — around $800 billion — is held outside Russia.

A recent investigation by The Times revealed that Abramovich himself owns property in the UK worth more than £200 million, in addition to his £1.3 billion investment into Chelsea since 2004.

In May 2018, after tensions between the UK and Russia led to his visa renewal being delayed, Abramovich withdrew his application and has since taken on Israeli citizenship.

At first glance, Real Madrid's ownership structure resembles the German 50+1 model. They remain one of just four clubs in Spain exempt from a 1990 law requiring all sports clubs to become privately-owned PLCs. Being fan-owned also affords them a 5% tax break over their competitors.

So-called "socios," paying members of which there are over 90,000, officially own the entire club and can vote in presidential elections. A 2,000-strong representative "member assembly" deals with more intricate matters such as approving the club budget and has the power to discipline the president.

And actually becoming president is no simple task. There are a number of restrictive boundaries to running for election, including personally guaranteeing 15% of the club's budget. During his 18 years in charge, Perez has made a number of tweaks to regulations designed to make it difficult to challenge his power. For instance, a presidential candidate now needs to have been an active member for 20 years, as opposed to the previous requirement of 10.

It's a little more straightforward for Abramovich. He bought Chelsea in 2003 for an estimated €160 million, at the time a record sale price in the Premier League. Since the takeover, the club's value has skyrocketed to an estimated $3.2 billion, according to "Forbes." The club had been listed on a submarket of the London Stock Exchange and Abramovich had to buy out numerous shareholders to take Chelsea back into private ownership. He now owns the club in its entirety (bar the ground and name of the club) and is the only shareholder.

While the two men share a willingness to spend big in the transfer market, Chelsea have tended to concentrate on emerging talents and the odd big name. Perez, on the other hand, was responsible for ushering in the "Galacticos" era in the early 2000s, bringing the likes of Luis Figo, Zidane, Ronaldo and David Beckham to the Bernabeu. Fast-forward to 2021 and Perez has admitted he has his sights set on Kylian Mbappe and Erling Haaland in the coming transfer window. 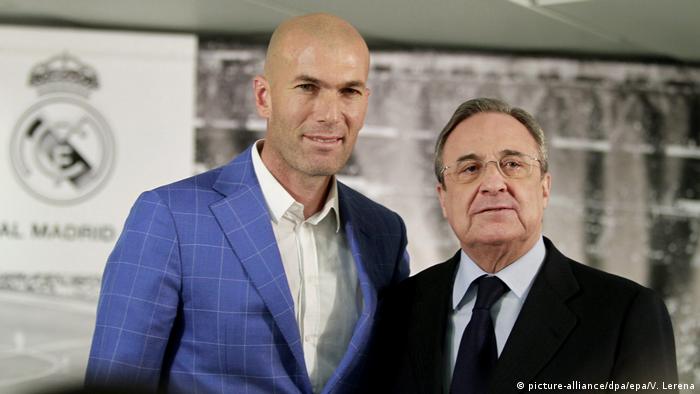 The two men take even more contrasting approaches to their public image. Perez has never been shy of announcing his plans to the press or seeking photo ops with the rich and famous. In Madrid, it is rare for him to be criticized by local journalists and Perez is always on hand when Real sign a new player.

The price of fame

In contrast, Abramovich shirks the limelight. In fact, in an interview with Forbes he hinted at some regret regarding the fame his purchase had brought him. And, despite Abramovich regularly attending home matches before his visa issues, he seems unwilling to show himself as the face of the club.

"Roman didn't anticipate the attention he got," says Silver. "I once shook his hand on the pitch and he was like a rabbit caught in the headlights. I've only heard him speak once."

Despite the secrecy, he remains hugely popular among Chelsea fans.

"He's been a great owner for us," Silver says. "He transformed the club and is arguably one of the best owners in football. You saw what it meant to him winning the Champions League in Munich [in 2012]. He's a fan and has done so much good within the community, especially during the pandemic."

Perez showed himself to be decidedly out of touch with fans during the Super League debacle. While Chelsea, following fan protests outside their stadium, were one of the first clubs to announce their intention to abandon the project, Perez has remained defiant.

The Super League was his brainchild, his solution to his club's immense financial problems and a way to prevent Real falling behind other European behemoths in the transfer market. He has refused to concede defeat, hoping that the project will remain on hiatus until the rest come to their senses. This stance earned him criticism from Real fans online but it remains unlikely that he will ever leave his post willingly or even see his power challenged at the club.

Despite their shared involvement in the Super League, both men have always made winning the Champions League their top priority. When the two sides meet under the floodlights in London on Wednesday, there will be just one winner on the pitch.

But history suggests that both of the men pulling the strings will come out on top regardless.

Editor's note: This article was amended on May 6, 2021, to clarify details of Mr. Abramovich's acquisition of Sibneft in 1997 and his purchase of so-called "krysha" protection in Russia. A previous version of the article also stated incorrectly that Mr. Abramovich had had an official residence in London and suggested that his purchase of Chelsea had nothing to do with an interest in football, something which Mr. Abramovich himself denies.

How rich regimes are ruining football

Two of the three most successful clubs in European history meet in the Champions League final on Saturday in Paris. But in a season defined by events off the pitch, the specter of the state-owned clubs looms large.

Champions League: Real Madrid, Karim Benzema and the greatest remontada of all 05.05.2022

Karim Benzema was the hero once again as Real Madrid produced another stunning comeback to shock Manchester City and reach the Champions League final. Impossible, unthinkable, unimaginable – yet not for the first time.

The British government has frozen the assets of Chelsea's Russian owner Roman Abramovich. The sanctions mean Abramovich will not be able to proceed with his planned sale of the club, putting its future in doubt.