Chechnya and Russia: A History of Conflict | News and current affairs from Germany and around the world | DW | 06.12.2003

Chechnya and Russia: A History of Conflict

After fighting in 1994 and 1995, the situation in Chechnya calmed somewhat. But President Putin has vowed to tromp the separatist movement, and this has fueled discontent in the break-away region. 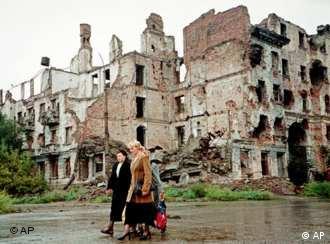 The Chechen capital of Grozny lies in ruins

The conflict between the Chechens and the Russians is a centuries-old clash. When Chechnya’s southern neighbor, Christian Georgia, agreed to a union with Moscow in 1783, the Muslim north Caucasus were encircled and a holy war ensued. Decades later, the Caucasus War stretched out for 47 years, finally ending in 1864.

Josef Stalin, who accused Chechens of helping Germans during World War II, sent the entire nation into exile, killing about one-third of them on the trek to Kazakhstan.

“When they came back, they never stopped thinking of separatism, but it was impossible during Soviet times,” says Gasan Gusejnov, an expert on ethnic conflicts in the former Soviet Union who has taught Chechen history and politics at the Heinrich Heine University in Düsseldorf.

The separatist movement took off with the collapse of the Soviet Union and resulted in bloody battles in 1994 and 1995. Before the fighting began, the population was 1.1 million -- two-thirds ethnic Chechens and a quarter of them Russians. Nearly 400,000 people lived in the capital, Grozny, which is now in ruins.

Tens of thousands of civilians died in the fighting, though accurate figures on the exact death toll are not available. Many Chechens live in refugee camps today.

The situation calmed somewhat after a kidnapping in January 1996 prompted the Yeltsin regime to make moves toward allowing the creation of a separate state. That never materialized, however, and when Vladimir Putin became president, he made anti-separatism a main cause.

“When Putin came to power in 1999, his main message to the population was, ‘there is a wounded place on the territory of the former Soviet Union and I will heal this wounded place. I will stop the separatists once and forever’,” Gusejnov explains.

While this message was hugely popular among Russians, it was a tougher sell in the outside world. Until the attacks on September 11, 2001.

“Immediately after September 11, Putin decided he could get support for this position because it looks very similar (to terrorism) and it is very similar,” says Gusejnov. “And no doubt there are contacts between Chechens and Arab groups or the Taliban or al Qaeda because it is a shadow world. And it is a world with huge amounts of weapons.”

In the two years since 9/11, hundreds of people have died both inside and outside Chechnya. Suicide bombings linked to separatist rebels have become common headlines in the papers and the international community has condemned the acts as terrorism. Criticism for Russia's policies in Chechnya has been cautious at best.

A breakthrough of sorts in Chechnya

America’s war on terror is far from over. And its field of operation is continually expanding. The latest country to join the ranks is the former Soviet republic of Georgia. (March 2, 2002)

Russia's President Vladimir Putin said that some mistakes have been made in what he calls the partial mobilization of new recruits for the Russian army to fight in Ukraine and that errors would be corrected swiftly. Meanwhile thousands of fighting-age men continue to leave Russia.

Men leave Russia to avoid being called up to fight in Ukraine. Kazakhstan and Georgia are reporting tens of thousands of arrivals. DW's Maria Katamadze travelled to a checkpoint on the border between Georgia and Russia to witness the mass crossing.