Residents of the South Bronx, a synonym for urban decay in New York, held a memorial service for the late Hugo Chavez. The Venezuelan president gave them money, fuel and the feeling not all politicians are the same. 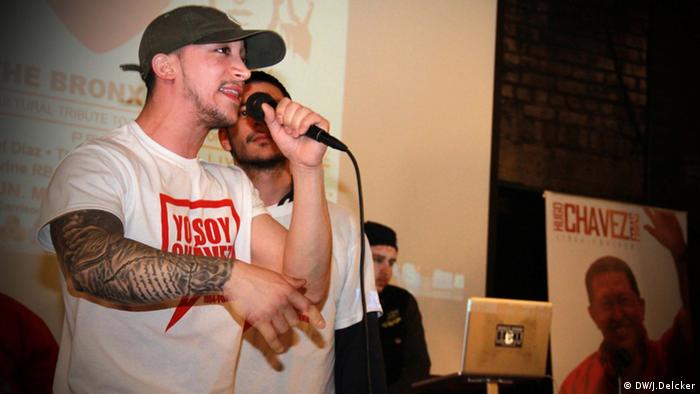 US President Barack Obama and New York Mayor Michael Bloomberg don't know what life is like in the Bronx, says 21-year-old Steven. His right arm is covered in dark-green tattoos and he's wearing a T-shirt with large red letters that read "Yosoy Chavez" - "I am Chavez" in Spanish.

"I definitely don't connect or relate to either Obama or Bloomberg, because they are elitists, and they don't represent our interests," he says. "But [Hugo] Chavez, he grew up with no food or shoes."

Steven is hanging out at the entrance of the "The Point," a community center in the South Bronx that's hosting a commemoration for the late Venezuelan president, who died two weeks ago. Inside the building, an art collective is playing hip-hop music in honor of Chavez.

The center's single-story building is in a neighborhood of crumbling facades and run-down cars. Local businesses advertise that they accept food stamps as a means of payment. The southern part of the Bronx has become a symbol of urban decay and social problems. 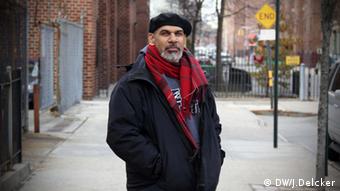 Chavez is being hailed mainly as a result of the "Petro Bronx" program that started eight years ago when the Venezuelan president visited New York City. He showed up at the center's doorsteps while in town for a UN General Assembly meeting. He went to the Bronx to meet with musicians and activists.

"Everyone was very excited," Felix Leo Campos remembers, "because he may have been the first foreign president to actually visit the Bronx and stay to speak with residents here."

The 57-year-old filmmaker taped the encounter between Chavez and the people of the South Bronx. Chavez spent an entire morning with them, more than two and a half hours, Campos recalls. His tape shows a man mingling comfortably with the locals. And Chavez made a promise to those present: financial support for South Bronx organizations and projects. He also said he would provide poor families with cheap fuel to heat their homes.

His commitment was part of the economic model professed by the Bolivarian Alliance for the Americas (ALBA), which Chavez designed as an alternative to the Free Trade Area of the Americas (FTAA) as proposed by the US.

"ALBA began as an initiative to rethink international trade," explains Alejandro Velasco of New York University, a historian who has done extensive research on Chavez. "Nations should exchange non-cash benefits rather than trading them. And they should exchange the goods that their trading partners need the most."

The program was also meant as a PR gag for Chavez' regime, Velasco says.

Despite increasing political tensions between Venezuela and the US, Chavez kept his promise.

"He believed that people in the US didn't really have a say in politics," Velasco says. For three years, Chavez continued to provide heating oil and pay about $1 million (780,000 euros) per year for social projects. The payments Venezuela came to an end in 2010, aside from support for certain projects now backed by a foundation. 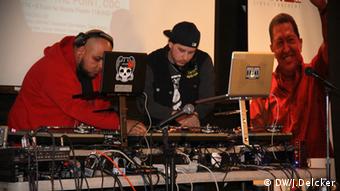 The funding stop ended for economic and political reasons, according to Velasco. The global recession had weakened Venezuela's economy as oil prices dropped. Venezuela was also in the midst of an expensive election campaign.

Also, the program had begun to generate negative headlines in the US, says Velasco. "People in the US started to ask: 'Why is this necessary? What is this despot doing in our country?'"

Even Steven has to admit that most people in the US don't think well of Chavez, but that's because of distorted media reports, Steven adds.

"Chavez will never go. He lives inside us," Steven and two rappers call to the audience in Spanish. The people cheer and shout, people who often feel neglected by their own politicians.

"Everybody here in the Bronx, in Brooklyn in Queens - it's not just the Bronx, it's the whole far boroughs - we connect with Chavez," Steven says later. "And we're going to remember him, and he's going to be someone to be looked up to. Because we don't really have people to look up to, you know what I'm saying?"

Where does Venezuela stand without Chavez?

Latin America's leftists have lost an icon - and their sponsor. Cuba, Nicaragua and other nations fear dramatic economic repercussions. The US hopes for a new beginning. (07.03.2013)

He saw himself as a revolutionary and a liberator - his critics saw a demagogue and a bully. The Venezuelan leader Hugo Chavez has succumbed to cancer at the age of 58. (05.03.2013)