Two people have reportedly been killed and 24 injured during a rally against French satirical magazine Charlie Hebdo in the Afghan capital. Violence broke out when hundreds of protesters clashed with the police. 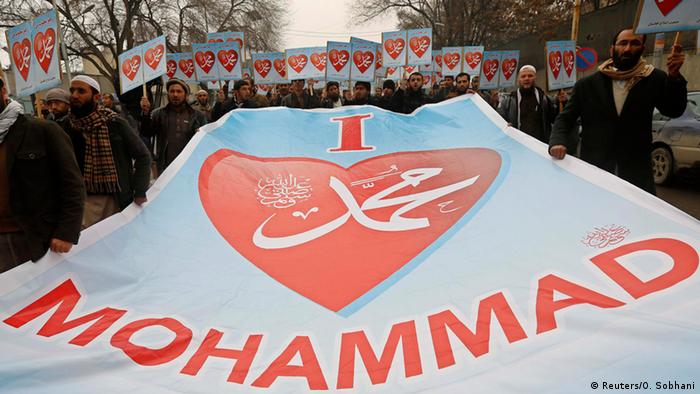 Angry protesters chanted "Death to France" and "Death to infidels" in eastern Kabul on Saturday, putting foreign citizens living in nearby international compounds on a state of alert.

According to Kabul police, some 500 people joined the rally to express anger against the publication of cartoons depicting the Prophet Muhammad in the French magazine.

The demonstration became violent when people attacked security forces with stones and burning tires, the police said. There were also reports of some protesters opening fire at the police.

"Seven protesters were wounded during the protest and were taken to hospital," Kabul police chief Abdul Rahman Rahimi told the AFP news agency. Seventeen policemen were injured during the clash, he added.

An eyewitness told the Reuters news agency that one protester "was shot in the head" and that he saw "one more dead body in a car." Afghan police have denied the reports of deaths, however, with Rahimi admitting that "there were some irresponsible armed men among the protesters who opened fire on police." He said that gunshots had wounded two protesters.

Some local residents and shopkeepers complained the demonstrators used the protest as an excuse to loot.

There have been mass rallies in many Islamic countries since Charlie Hebdo published caricatures of the Prophet Muhammad in its special edition earlier this month. The issue came after an Islamist attack on the magazine's Paris office o January 7 that killed 12 of its staffers.

At least 20,000 people took to the streets in the western Afghan city of Herat last week to protest against the magazine.

Cologne's Rose Monday Carnival procession will not feature a Charlie Hebdo-themed float. The parade's committee member said they pulled the feature over concerns about its inclusion in February's festival. (29.01.2015)

Pakistani police in the southern city of Karachi have clashed with hundreds of protesters at rallies to condemn caricatures of the prophet Muhammad. The protesters were trying to storm the French consulate, police said. (16.01.2015)