Despite equality laws, quotas for women and vitriolic feminists, Germany has yet to see a woman climb to the highest rung of political power. All eyes are now on Angela Merkel to see if she gains entry to the boys’ club. 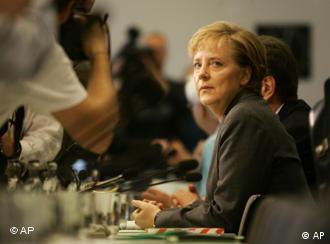 Merkel is holding her own in untested waters

The inconclusive poll on Sept 18 which has plunged Germany into political paralysis and triggered horse-trading between the main parties has overshadowed another aspect of the election that generated much excitement: whether Europe’s largest economy will, for the first time in its postwar history, be led by a woman.

The answer to that no longer seems clear after the conservatives' disastrous election result and challenges to Angela Merkel's claim to the chancellorship.

But there's no denying that Merkel's candidacy for the highest political post has been nothing short of historic in a country where the reins of power are overwhelmingly in the hands of men.

Katja Husen, spokesperson for women's issues at the Green party pointed out that women in Germany are persistently absent from top jobs.

"The fact that we’ve never had a female chancellor before is one aspect. But it's the same in company boardrooms -- we've just never had famous women in top positions of power."

However, statistics show that compared to the German corporate world, women have undeniably been more successful at breaking through the so-called glass ceiling when it comes to politics. 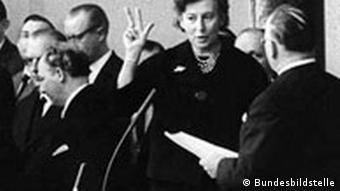 Female participation in politics has gradually risen over the years ever since conservative chancellor Konrad Adenauer reluctantly appointed the country's first female minister, Elisabeth Schwarzhaupt (photo), to his cabinet in 1961.

Today, six out of 13 ministries in Chancellor Schröder’s government are led by women -- a big leap from the two female ministers in former chancellor Helmut Kohl’s cabinet. And women's share in parliament currently hovers at 32 percent, up from a mere 9 percent in 1980.

The proportionately better representation of women in politics is attributed to a slew of laws and policies guaranteeing gender equality and equality of opportunity that were put in place in the 1980s and 1990s. 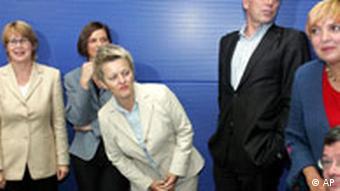 Renate Künast, center, will be co-chairing the leadership of the Greens together with her male colleague, Fritz Kuhn

But, most agree that it's the "women's quota," first introduced by the Green party in the 1980s with a strict 50 percent reservation of party seats and posts for women, that was the trigger for an explosive increase in the number of women politicians.

"It's been the most effective instrument to boost women's participation in politics, better than all the equality legislation and confidence-boosting measures for women," said Husen.

"Thanks to it, men have no choice but to see to it that they recruit more women."

The center-left Social Democratic Party (SPD) followed suit in 1988, committing itself to filling 40 percent of its posts with women while the center-right Christian Democratic Union (CDU) finally agreed in 1996 to include more women in its ranks, but remained noncommittal about the exact proportion.

The measures may have indeed led to more representation for women in politics, but many point out that it hasn't really given women tangible influence or allowed them to penetrate the highest echelons of political power in Germany. 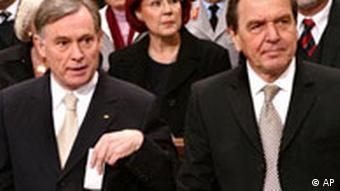 One major reason, according to Katja Husen, is the fact that high-level German politics is still exclusively a boys' club.

"Power structures in Germany are very homogenous -- they're dominated by male academics and the rules of the game are thus set by men too," said Husen.

"There's no sense of bringing in diversity or encouraging people with different backgrounds -- it's a very German way of thinking."

In a recent article, Germany's leading feminist Alice Schwarzer likened Chancellor Schröder's punch-drunk performance on the evening of the election -- where he dismissed Merkel's claim to the chancellorship insisting he should carry on instead -- to a matter of honor. Schwarzer said Schröder was behaving like a tyrant and couldn't bear the thought of losing out to a woman. 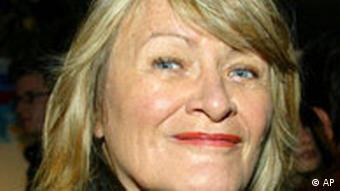 "Sixty years after Hitler and 87 years after gaining the right for women to vote, the people may have elected her (Merkel), but the majority of the powerful are still far removed from conceding the highest office to a woman," Schwarzer (photo) wrote.

But macho attitudes aren't the only problem.

Claudia Neusüss, a former executive director of the Heinrich Böll Foundation, pointed out that a strong domestic image of women as taking responsibility for family and children that originated in West Germany in the 1970s and 1980s still dominates the current political sphere to an extent. 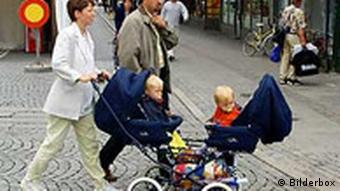 "Though it's all changing now, women too tend to think along those lines. Besides, juggling a career and family in Germany isn't easy either," she said.

A lack of role models is a further hurdle to women aiming high in politics.

Though Germany has seen three female presidents of the Bundestag and a woman presiding over the constitutional court, the trend has stopped when it comes to leading the country, either in the role of president or chancellor, or even one of the two big political parties -- until Merkel, that is.

"Women have to develop their own rules of the game, they have to know what they want and learn to move away from typically 'soft' topics such as health and education and take on the harder ones," said Neusüss.

"Merkel needs to do more"

Given the odds, Angela Merkel's rise to the top -- albeit facilitated by the CDU's damaging party scandal that led to Helmut Kohl’s departure -- has, most agree, sent an important signal to women aspiring for higher positions. 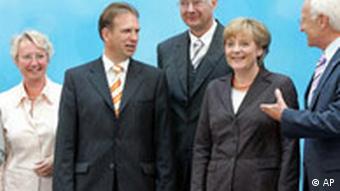 Merkel with her team

"The very fact that it's possible for a woman from a conservative party to become chancellor is very progressive," said Neusüss, adding that Merkel needed to do much more for women than the rather flimsy promises on family and equality in her party platform.

"Being a woman at the top isn't enough," Neusüss said.

Pharmaceutical giant Schering announced this week it would appoint Karin Dorrepaal to its executive board – a sad first for Germany. No other industrial nation has as few female top managers as Germany. (July 10, 2005)

Merkel and the Female Question

With less than three weeks to go to the elections, Germany is wondering what it will mean to have its first woman chancellor. Angela Merkel, however, is not promising a feminist or even a particularly feminine future. (Sept. 1, 2005)

The rise of Angela Merkel to CDU chancellor candidate is a clear coup for her, the party and possibly Germany. As the first female aspirant, she could poker hard with her gender trump, but has thus far chosen not to. (June 3, 2005)