Having weathered a second-half storm, Gladbach sent Sevilla packing with three second-half goals. Lars Stindl led the way with a brace and an assist. Gladbach are now in pole position to take third spot in their group. 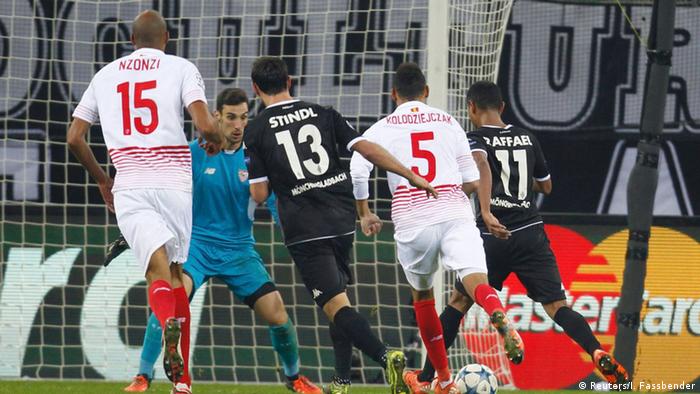 A flurry of attacking intent early on and a dominant performance from Lars Stindl left Gladbach in pole position to leave their Champions League group for a spot in the Europa League. The defending champions of that competition, Sevilla, were a shadow of the side that saw them win the reverse fixture on matchday one.

It was clear from the start what Andre Schubert wanted his team to do. Shots were taken from all over the pitch as Sevilla's goalkeeper Sergio Rico was tested. Ibrahima Traore was at the heart of most of it, but he had to be replaced after just 13 minutes due to a muscle injury (Josip Drmic came on). After Gladbach were denied a penalty, Yann Sommer did the same to Yevhen Konoplyanka with a fantastic save inside the six-yard box.

With Traore's pace no longer a factor, Lars Stindl took control of the game. He timed his run perfectly to turn home Granit Xhaka's shot and finally convert one of Gladbach's long-range efforts. Having weathered a small Sevilla storm at the end of the first half, Gladbach did the same at the start of the second half in what proved a decisive spell to overcome.

An hour gone and the game's tempo remained furious. Granit Xhaka had forced a strong save out of Rico with a trademark strike from range before Mahmoud Dahoud wasted two opportunities of his own. The young midfielder nearly paid for it too, but both Konoplyanka and Kevin Gameiro failed to take advantage with their chances.

Once again, Gladbach persevered and Fabian Johnson's fantastic goal was their reward. The US international controlled the ball on his left foot before curling into the far corner with his weaker, right foot. With Sevilla struggling, Gladbach's combination play led to a third just ten minutes later when Stindl surged towards goal before feeding Raffael.

Vitolo's neat finish fired up the visiting fans, but a minute later Stindl's perfectly-placed strike from distance left no doubt. Even a late penalty from Ever Banega couldn't dampen the home fans' spirit. Gladbach's win means the pressure is off going into the final matchday, where Sevilla have to beat group leaders Juventus to stand a chance of taking back third spot.

Real Madrid survived a late scare to beat Shakhtar Donetsk 4-3. Having lead 4-0 thanks to a brace from Cristiano Ronaldo, three late goals set up the hosts for a dramatic comeback but they ran out of time to find a fourth. Manchester United drew a blank at home against PSV, leaving Wolfsburg top of Group B. A goal from Mario Mandzukic was enough to send the blue side of Manchester packing in Turin, while Zlatan Ibrahimovic scored on his return to his hometown club Malmo as Paris St. Germain won 5-0.