Cristiano Ronaldo's penalty kick brings another European Cup for Real Madrid who defeated Atletico for the second time in three seasons. Zinedine Zidane joins an elite band to win the trophy as a player and as a manager. 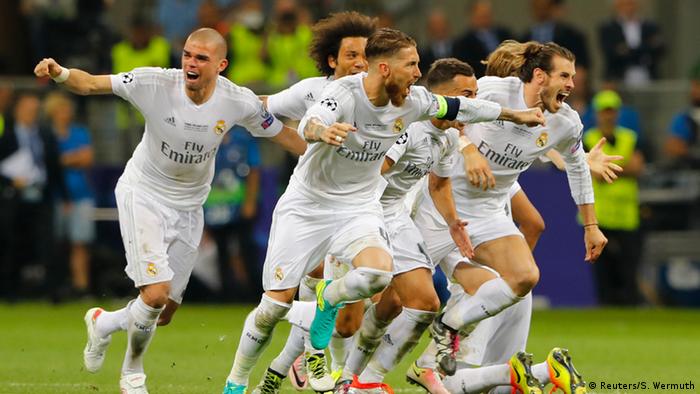 Real Madrid have been crowned European champions for the 11th time, beating city rivals Atletico after a 5-3 penalty shootout win at the San Siro in Milan.

Sergio Ramos' early goal was canceled out by substitute Yannick Carrasco as the match finished 1-1 after 120 minutes. Despite a disappointing performance, Ronaldo stepped up to clinch another Champions League win for Real. It's the club's fourth European Cup win since the turn of the millennium, and Zidane joins Johan Cruyff and Franz Beckenbauer as winners of Europe's top tournament as a player and in the dugout.

The sides met in the 2014 Champions League final, with Atletico surrendering a lead in stoppage time. Coached by Bayern's new boss Carlo Ancelotti, Real went on to win 4-1 in Lisbon. Diego Simeone has seen the likes of Thibaut Courtois, Diego Costa and David Villa head elsewhere as a result of the club's success - his starting line-up in Milan featured six changes from the previous final. 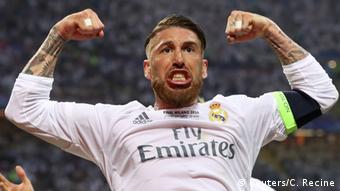 Ramos nets the opener, the first defender to score in two finals

With speed and purpose, Real Madrid sprung out of the traps, and controlled the early exchanges. Since replacing Rafael Benitez, Zidane's side have won 22 of 27 matches, competing for the league title until the final day of the campaign and going on to secure European success. The start was a sign of things to come, the lead arriving after 14 minutes.

Toni Kroos' free-kick was nudged towards goal by Gareth Bale, whose knock-on was bundled home by Ramos. By scoring in his second final, the Real captain joins an elite club of six players from his side to do so, including Alfredo Di Stefano, Ferenc Puskas and Raul Gonzalez, who holds the highest number of appearances in their history.

Losing just 18 goals all season in Spain's La Liga has earned Simeone's men the moniker of being the best defensive side in European football. But the Argentine's dissatisfaction was clear as the two-time Champions League finalists afforded Real acres of space in front of the Atletico back four. 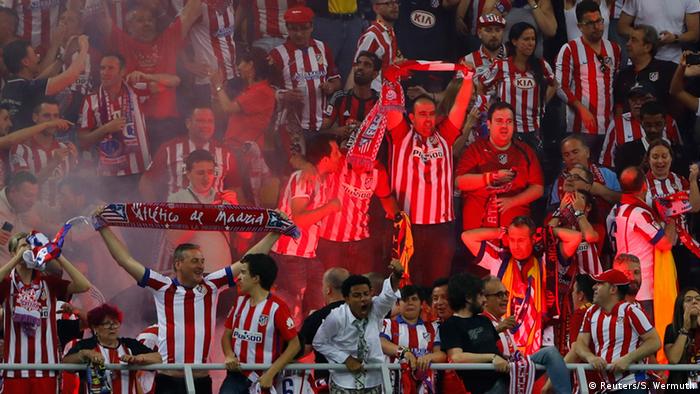 Atletico fans burst into raptures after the equalizer

Atletico began the second period at a furious pace, buoyed perhaps by the half-time team talk from head coach Simeone. Within a minute of the restart, Pepe clattered into Fernando Torres and English referee Mark Clattenburg pointed to the spot. But Griezmann, who missed earlier in the season against Real, rattled the crossbar from 12 yards.

It seemed, for a while, like Atletico were closing in on an equalizer. Real survived a scare on 53 minutes when a set-piece turned into pinball and Stefan Savic poked narrowly wide of the target. Five minutes later, Saul Niguez, the match winner in the first leg against Bayern Munich, volleyed wide from the edge of the box.

Despite taking off Toni Kroos and Karim Benzema, Real carried a continued threat in forward areas. In the space of a few minutes, Zidane's men should have killed off the contest. On 77 minutes, Ronaldo's disappointing game was compounded with a poor finish, while a minute later, Bale's finish was heroically cleared off the line.

These were missed chances that Real would regret in normal time. Juanfran gambled with a forward run from right back, clipping the ball across goal for substitute Yannick Carrasco who leveled the scores.

Atletico carried momentum and confidence into extra time as Real's key players slowly began to tire, with Zidane making all three of his changes after 77 minutes. Bale, one of Real's most impressive performers, suffered cramp quickly after his shot was superbly deflected by Diego Godin. 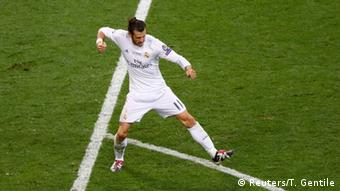 Bale celebrates scoring from the spot

His fitness up for debate before the game, Ronaldo struggled to make an impact. Meanwhile, at the other end, Real backed off against the quick-footed Carrasco who was doing serious damage in one-versus-one situations.

This tie went all the way to penalties, though, and it was Real Madrid who held their nerve. Lucas Vazquez, Marcelo, Gareth Bale, Sergio Ramos and Ronaldo all converted, while Juanfran missed a decisive kick for Atletico Madrid, who lose in the final for the third time.

In a repeat of the 2014 final, Real Madrid overcame city rivals Atletico 5-3 on penalties to win their 11th European Cup trophy. Now take a read through of how it all happened, courtesy of @DW_Sports. (28.05.2016)

Rummenigge: Lewandowski will play for Bayern Munich next season, not Real Madrid

The Munich side have dismissed the notion that they would be willing to sell Robert Lewandowski this summer. However the player's agent has confirmed talks with Real Madrid and Lewandowski called Real a "big attraction." (28.05.2016)