The Bundesliga side were taught a lesson in how to handle big European nights. Despite having more possession, Leverkusen failed to really trouble Cristiano Ronaldo and co, who proved more effective. The occasion might have been a bit too big for Leverkusen. Peter Bosz's side made errors that allowed their Italian hosts to attack and, in turn, failed to make enough of their own chances.

Jonathan Tah's header ended up going up rather than out, and Gonzalo Higuan pounced to give the hosts a lead that was somewhat out of the blue. The Juventus forward took control of the high ball before firing into the far corner.

The goal settled a Juventus side that already looked comfortable. Leverkusen enjoyed around 60 percent of the ball but continually looked short of ideas as to what to do with it. The expansive play that has been on show under Bosz in the Bundesliga was nowhere to be seen, despite the inclusion of starlet Kai Havertz. 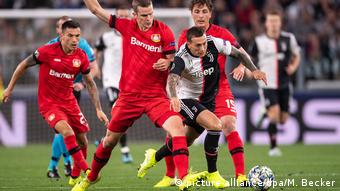 Leverkusen had trouble doing enough with their possession.

Lukas Hradecky made two strong saves to deny Cristiano Ronaldo, but the Leverkusen keeper couldn't stop Federico Bernardeschi from adding a second with a low drive after Higuain's cutback.

Paulinho nearly chipped in to give Leverkusen hope heading into the final 10 minutes, but it wasn't to be. Worse still, there was time for a frustrated Ronaldo to grab his goal - his 27th in 25 games against German teams in the Champions League.

Leverkusen might have the talent of Havertz and the goals of Kevin Volland, but neither of those two were able to shine. This was a night where Leverkusen did lots right, but still enough wrong to be punished by a better, more experienced team.