Fans with Champions League final tickets were stranded when their tickets were stolen outside the stadium. Organizers UEFA were no help, with a lack of stewards and 'aggressive' policing contributing to chaotic scenes. 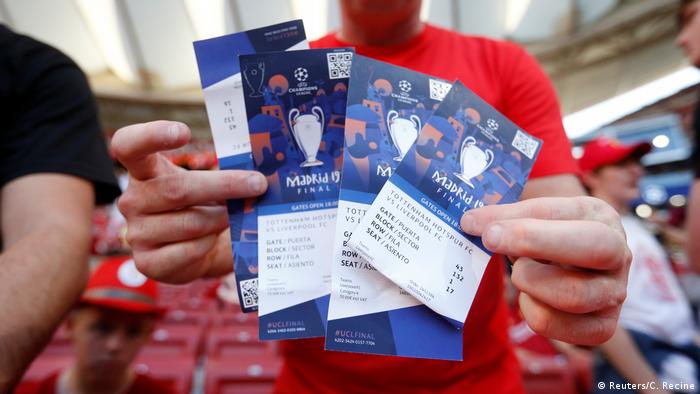 It's 70 minutes before the biggest club football match of the season and Sharon Watkins is one of thousands of people wandering around the concrete bowl of the Wanda Metropolitano in Madrid.

One hour and twelve minutes later, instead of celebrating Mohamed Salah's second-minute penalty with her fellow travelling Liverpool fans she's making her way back to the city center in time to see the last 20 minutes through the window of a pub, despite having bought her ticket legitimately from the club's official 16,600 allocation.

Watkins, registered as disabled for the final after breaking her foot during last season's final in Kiev, also became separated from her son in the process of getting through security gates. She was just one of dozens of fans of both Liverpool and Tottenham Hotspur whose tickets had been stolen in and around the stadium but who were met with blank stares, refusals and complete indifference in every attempt to report the crime or secure a replacement ticket.

When Watkins tried to explain her situation to ticketing staff, DW watched as the ticket office shutters were simply closed on her.

UEFA's inaction is the stated policy of an organization regularly accused of failing to understand or listen to supporters. Both Liverpool and Spurs put out statements before the match explaining to supporters that: "If tickets are lost or stolen, they will not be re-printed and you will not gain access to the stadium." Some clubs operate similar policies for domestic matches while others offer to print tickets again where neccessary.

Over in another part of the ground, Hamza (surname withheld) has managed to hold on to his paper ticket and make his way through the first security point, where tickets are checked with a specially-designed pen engineered to show up fake tickets, of which plenty are in circulation. UEFA claims the pen's accuracy is 100 percent. After some time taking in the atmosphere with his friend who spent "several thousand" euros on a ticket, the pair make their way to the turnstiles.

As Hamza scans the barcode to gain entry, the light flashes green. But a handful of people behind and around him, presumably without tickets, rush through and over the Liverpool fan causing his ticket to rip in two. While the fans that rushed him flee, Hamza is left on the wrong side of the turnstile, with a ticket that now registers as used, and the light flashing red. Armed police arrive on the scene to deal with the chaos but the officers ignore Hamza's pleas before one rips his already-damaged ticket in half and tosses it to the ground.

"It was heartbreaking," said Hamza, who travelled to the game from London. "I saw my ticket get ripped and I thought ‘that’s it. I should have stayed at home and watched it with my dad because now I’m in real trouble.' That feeling when the ticket was ripped up was absolutely horrendous. As the policeman did it, I was trying to explain. They’re Spanish police and you don’t expect them to speak English but in that moment they weren’t willing to listen and were very aggressive." 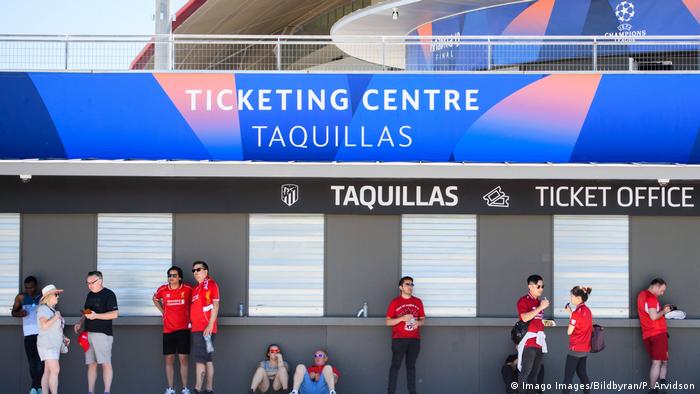 Many fans found shutters down at ticket offices

Though it has been in place for some time, UEFA's policy is difficult to stomach for those who have had their tickets stolen. In many cases the person who stole the ticket will either have made thousands from selling it on or take the seat themselves. Both Hamza and Watkins had proof of purchase and the process of checking which person is sat in the assigned seat does not seem a particularly taxing task, especially given the revenue generated. "I think it’s absolutely bonkers," said Hamza.

In the hours before kickoff, in temperatures of over 30 degrees, there were chaotic scenes around the stadium on the north-eastern outskirts of Madrid. Mounted police officers directed fans up dusty banks with flights of stairs closed off and fans of both sides found it impossible to work out the location of their seat thanks to a chronic lack of signage.

Notable by their absence were stewards. On DW's approach to the stadium, few, if any, stewards or volunteers could be seen, leaving armed and mounted police officers fending off questions about where the entrances were. There were some stewards after the first security checkpoint and, after being fobbed off at the ticket office along with dozens of others, Hamza finally got in to the stadium at half time, in a free seat in the Tottenham end far from his friend.

Ronan Evain, CEO of Football Supporters Europe, a network of fans from around the continent, said there was a notable shortage of stewards all around the newly-built stadium, a situation he considered to have been a major contributor – along with the large amount of ticketless fans – for the confusion at such a high-profile game.

"It’s unusual," he explained. "The norm for a game like this would be to have at least volunteers outside the ground that would be able to indicate where the ticket office was, where to find seats, and people that speak English. There were very, very few stewards or volunteers."

Evain, like DW, saw the police resort to using batons to repeatedly strike fans on the approach to the ground. But he also pointed out that the officers were put in a difficult position thanks to the lack of planning for a game that was always going to bring thousands of fans, both with tickets and without, to the Spanish capital.

UEFA, who failed to respond to repeated requests from DW for comment on these issues, have ultimate responsibility for organizational matters.

"It’s of course inexcusable to hit someone in the face with a baton but with proper crowd management and information that wouldn’t have happened," Evain added. 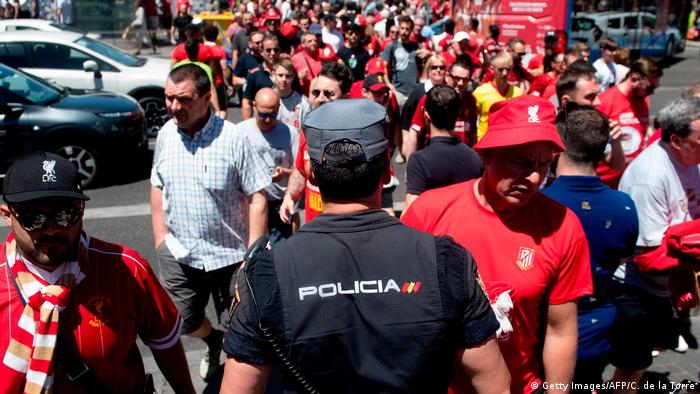 Spanish police and Liverpool fans before the game

Watkins and Hamza were far from the only fans to experience such frustrating issues. With no obvious help centers around the ground, dozens of legitimate ticket holders who had lost their paper tickets or had them stolen or damaged missed the game.

UEFA trialled a new electronic-only ticketing system at the Europa League final in Baku. The same system is in place for the upcoming Nations League matches and may well be used at Euro 2020. Evain says it does appear to address some of the issuses around ticket theft but also creates some other problems, partiuclarly surrounding the transferring of purchased tickets.

Clearly no system is going to be perfect, and the problems experienced by Hamza, Watkins and dozens, possibly hundreds, of others are not new. But when you've shelled out thousands to watch the club you love in the biggest match of the year, the refusal of a rich organization who profess to be concerned with the wellbeing of fans and the game to even listen, let alone help, is – in the eyes of Watkins – "absolutely disgusting."

The actions of European football's governing body to date suggest it's not a charge that particularly concerns them. After all, the money's still coming in.

Five Borussia Dortmund supporters have been handed heavy fines after being found guilty of insulting Hoffenheim owner Dietmar Hopp. But the fans' lawyers have criticized the proceedings as unfair and will appeal. (03.06.2019)