The Bundesliga side was always going to have a tough time of it against the current Premier League leaders, but the manner of the loss was nonetheless an alarming reminder of the gap between the two teams. 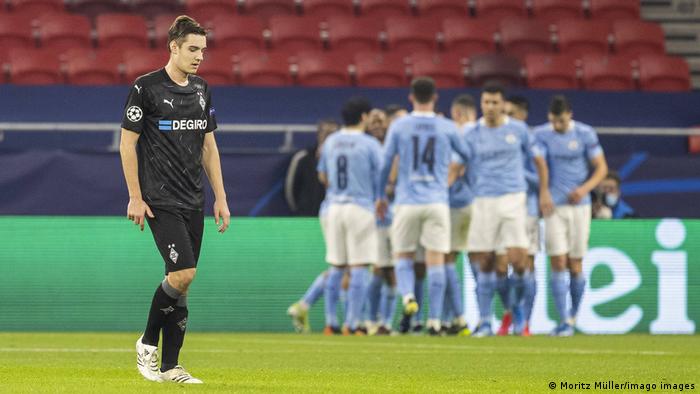 City didn't overrun Gladbach the way Bayern did Lazio, but their grip on the game tightened with every passing minute. They were always in control, their goals felt inevitable.

With the ball at his feet just inside his own box, Christoph Kramer tried to find a teammate. Instead his pass found Joao Cancelo out wide, and the Portuguese's superb, deep cross was headed home by Bernardo Silva.

The decision to play out from the back is testament to how Gladbach want to play, but that it resulted in wave after wave of City attack was a sign of things to come.

"They are an absolutely top team," Rose said afterwards. "It's so hard to play against them because everything has to be perfect."

Gladbach always had the threat of that quick, high ball to get in behind City's high line, but it took nearly an hour for that threat to do more than loom. After Gabriel Jesus missed a glorious chance for a second, Gladbach's attack arrived emerged. After spoiling one attack, Denis Zakaria over-hit a pass to prematurely end another. Then Alassane Plea's acrobatic flick went just wide and with it Gladbach's hopes.

"We weren't brave enough in possession," Lars Stindl said afterwards. "It was the small things today. We had small windows to make passes. We just didn't always get it right." 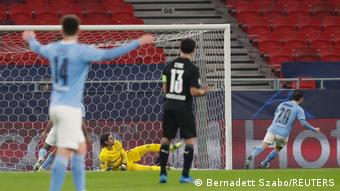 Not long after that, another deep cross was floated in, Silva neatly headed the ball back into the box and Jesus was there to score. Long before Hannes Wolf missed a glorious chance to change the tie in the final seconds, the five-minute spell after the hour mark proved how much finer the lines between winning and losing are in games. Right as Gladbach were getting back into the game, City ended it.

Part of this is simply that Manchester City are a team in great form with better players — Wednesday's win was their 19th consecutive in all competitions — but Gladbach's recent week looks to have taken their toll.

Gladbach didn't play badly in this game, mostly because they didn't get much chance to play. Instead, they did a lot of chasing, covering and running. That was no surprise, but the timing of another game where they were the passive party is far from ideal.

"City were very good on the ball. We did a lot of running off the ball," said Florian Neuhaus. He added how frustrated he was to have conceded goals from crosses they knew were coming.

Not for the first time since the news of Rose's move to Dortmund was announced, Gladbach looked hesitant. For a side whose flowing football so often oozes intuition, hesitancy is a death sentence. With RB Leipzig, Borussia Dortmund (German Cup) and Leverkusen up next, Gladbach's season is on the verge of being decided by early March.