Chadrac Akolo: 'Hunger was a part of my life'

Stuttgart's Chadrac Akolo is off to a flying start in the Bundesliga. The Democratic Republic of Congo international has come a long way since arriving in Switzerland as a refugee at the age of 14.

'I didn't flee to Europe to become a footballer'

Akolo: 'I didn't flee to Europe to become a footballer'

After your goal in a recent match against Cologne, a Stuttgart newspaper compared you to Lionel Messi. Does that make you proud?

It was a special goal, because I scored it in injury time. Maybe the people here got a bit euphoric. If it was a goal that helped, then I'm very happy, but it was definitely not comparable to what Messi can do.

As a new signing at Stuttgart you've already scored in both the Bundesliga and the German Cup. The fans are singing your name. Has what you've achieved sunk in yet?

I have realized that I'm in a good phase. I also know that tough passages will come. I have to deal with that. I have experienced both good and bad moments so yes, I know I'm enjoying a good time right now but I also know how quickly that can pass. I live from day to day and will keep working hard.

Stuttgart are just the latest in a long list of teams that you have played for: From the DR Congo to Germany via Switzerland. Did you ever think as a child in Kinshasa that you would play in the Bundesliga one day?

No. I never thought I could earn money playing football. I didn't come to Europe to play football. I came here to go to school. It all happened really fast. I started at Sion and became a starter. That was already completely unbelievable. And now, to be here in Stuttgart. I'm speechless. I try to put these thoughts out of my mind. I want to take a look at it all when it's over.

Is it true that you went hungry during your youth?

Yes, that's true. The Demoratic Republic of Congo is a country with many problems. I think 60 percent of the people in my country suffer from starvation. It might be even more. For many, it's a part of life – and it was for me back then.

What was the situation for you and your family before you decided to flee to Europe?

Everything happened very quickly. I wanted to follow my mother and my father was the only one who stayed behind. I got some money in order to pay for school but I didn't go because I wanted to buy some food with the money instead.

Was your desire to go to school the reason you fled the Congo?

I didn't flee to Europe to become a footballer. When I arrived I only wanted one thing: To go to school. Once I was there, my new friends took me to football and that's when I thought, why not? A football career could be cool. That's where it all started.

What memories do you have of your flight?

I experienced war and many terrible things as a child. But I'm someone who tries to suppress such things, so as not to think of all the terrible things and not try to understand what happened. Sometimes it helps to block out the past but when I do talk about it I remember everything. I also remember the fear I had as a youngster in Switzerland of being sent back to the Congo. 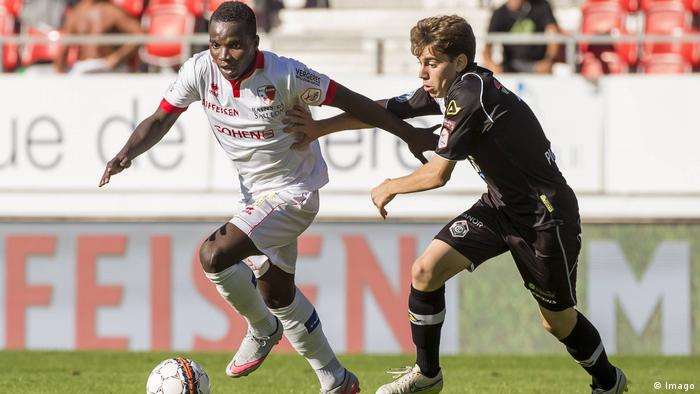 From one of the poorest to one of the wealthiest countries:  Your arrival in Switzerland must have felt like a step into an entirely different world. What was your first impression?

Wonderful. Everything was so pretty. When I saw that there was always something to eat and drink, it was unbelievable at first. It was somehow unrealistic compared to the Congo. I was really warmly welcomed here, both in Switzerland and in Germany.

What does your success in the Bundesliga mean for your family?

They're very proud of me. It's just as unbelievable for them as it is for me. It's a crazy development, but I can't spend a lot of time thinking about it. I have to concentrate on my work. My family watches me on television and they write to me after every game.

You are living the dream of million of kids in Africa, but how does the dream feel in reality?

In reality it means a lot of hard work. It's a tough job. You have to work on yourself everyday and you have to sacrifice a great deal, that shouldn't be kept a secret. As a professional, you don't have the same life as others. You have to be really stubborn and you have hardly any liberties. Really, the only thing you do have is your job.

When will we see Chadrac Akolo playing for DR Congo at the World Cup?

I've only recently become an international. This time we didn't make it, but maybe we'll qualify for the next World Cup. I'm still young. I have time, but of course I dream of going to a World Cup. If it doesn't work out, then only God will know why.

The interview was conducted by Joscha Weber.

Akolo: 'I didn't flee to Europe to become a footballer'