Cautious optimism as Iran and US edge closer to a deal

Iran's foreign minister has said that he and US counterpart John Kerry have come closer to an agreement over Tehran's nuclear program. But a Saudi prince has warned that a deal could spark a nuclear technology race. 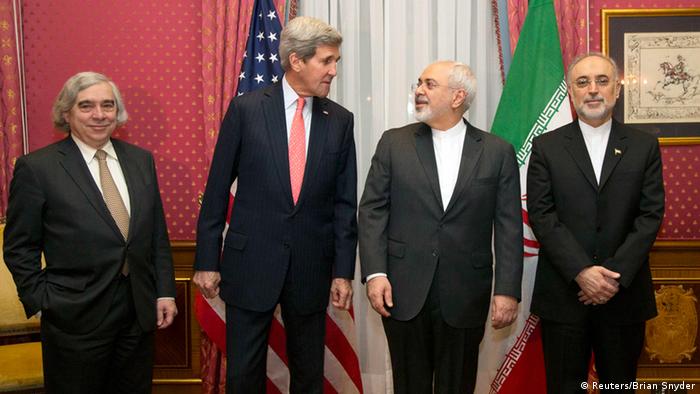 Iranian Foreign Minister Mohammad Javad Zarif began a week of overdrive nuclear negotiations on Monday with five hours of talks with US Secretary of State John Kerry in Lausanne, Switzerland, before heading to Brussels to meet with his French, German, and British counterparts.

He's expected back in Switzerland again on Tuesday for another meeting with Kerry, as the Iranian delegation hopes to have a solid framework to present to its country in time for the Persian new year celebrations this weekend.

Whether anything significant will be agreed to by Friday remains doubtful, as one US official told reporters on condition of anonymity. "Iran still has to make some very tough and necessary choices to address the significant concerns that remain about its nuclear program."

However, both Iran and the West saw some room for optimism that an end-of-March deadline, or at the very least one in June, could be met if negotiations maintained their current breakneck pace.

"On some points we came close to an agreement," Zarif said following his conversation with Kerry. Iran's oil minister, Bijan Zanganeh, said he was "very optimistic," and British Foreign Secretary Philip Hammond said "we're closer than we were" ahead of the round of talks in Brussels. Hammond hedged his comments, however, by adding "we've still got a long way to go."

Zarif and his delegation also raised the issue of a controversial letter signed by 47 Republican US senators warning Tehran that a new administration could cancel any deal with their government at any time, something Kerry has previously said was erroneous.

"These kinds of distractions are not helpful when we're talking about something so serious," the US official said.

A detailed agreement between Iran and the group composed of Britain, China, France, Russia, the US and Germany has been 12 years in the making. A final deal could see Tehran reduce its number of centrifuges and keep enrichment levels below that needed to make bombs for at least a decade, in exchange for the removal of painful sanctions. But the speed at which those sanctions would be rolled back remains a point of contention.

Monday's talks were overshadowed, however, by warnings from Saudi Arabia that a deal with Iran could spark a nuclear technology race across the Middle East.

Prince Turki al-Faisal, a former Saudi intelligence chief and ambassador to the US, told the BBC in an interview that "if Iran has the ability to enrich uranium to whatever level, it's not just Saudi Arabia that's going to ask for that."

The prince, whose country is concerned a nuclear deal would boost the regional status of its Persian rival, cautioned that all the countries in the region would want to increase their nuclear capabilities if Iran did so.

Biden: Letter to Iran 'beneath the dignity' of the Senate

An open letter from US senators to the Iranian government has outraged the Obama administration. Vice President Biden blasted the lawmakers' 'undermining' of diplomatic channels, calling it dangerous for US credibility. (10.03.2015)