Catching up but still miles behind: German museums in 140 characters | Science | In-depth reporting on science and technology | DW | 01.04.2014

Catching up but still miles behind: German museums in 140 characters

German museums have been a bit Luddite when it comes to embracing smartphones and social media. MuseumWeek was meant to change that. Now, slowly, the organizers say technology can compliment art. 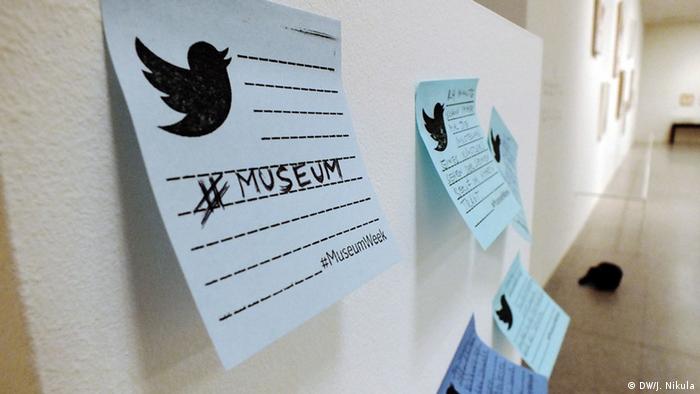 Large, expansive rooms. Works of art on the walls. In a corner, two white, waist-high pillars covered in blue stickers.

A visitor approaches one resolutely, bends down, reads a handwritten note and laughs.

Smartphones, Twitter, posting - they're terms you wouldn't normally associate with museums - not in Germany, anyway. But that could change: Germany's first-ever MuseumWeek has shown how.

For seven days, museums told their own stories on Twitter, showed collections and installations and asked visitors to share museum memories. Each day, the museums highlighted a different aspect of their own stories.

Helge David brought the project to Bonn, honing the concept for the Bundeskunsthalle and Deutsche Museum. Blue Post-It notes were distributed throughout the exhibition rooms. In 140 characters, visitors wrote their thoughts. The stickies left room for creativity, but were limited to the essentials.

David sees gains for museums. The art historian is the founder of www.openmuseum.de, which aims to complement traditional displays with digital curation.

"All museums show only a fraction of the material that's available. Smartphones offer the opportunity to supplement the exhibited material, with pictures from the museum's archive or information on the history of the images," she says.

The work of art is still the centerpiece. And the digital content enrich the exhibit - without seeking to outshine it. 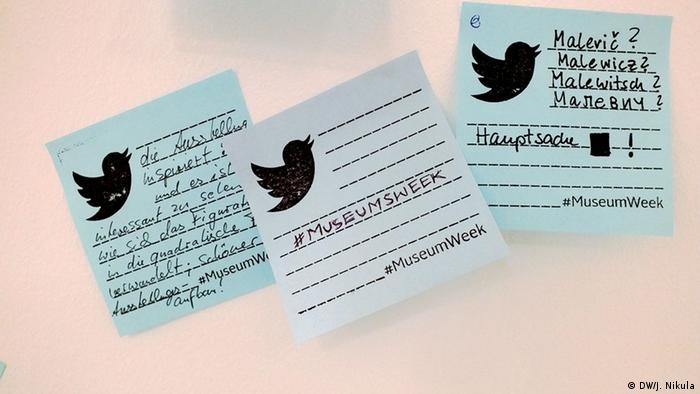 "The exhibition inspires," reads the first "tweet" on the left

"Within the framework of MuseumWeek, we were able to try a lot of things," says Siebert. "We don't want to just use Twitter over the short term, but also follow the developments over the next few months."

The Bundeskunsthalle now wants to open itself to every possible target group and further integrate smartphones into its exhibitions.

Smartphones are everywhere in museums, she adds - meaning that everyone almost has got one - and it's something, Siebert says, to which museums should adapt.

Visitor response during MuseumWeek was positive. Contributions at the Bonn museum shared on Twitter and there were loads of comments.

In England, says Helge David, the number of visitor interactions tends to be higher, but museums there have been active on Twitter for some time now. So it's hard to compare the two properly. 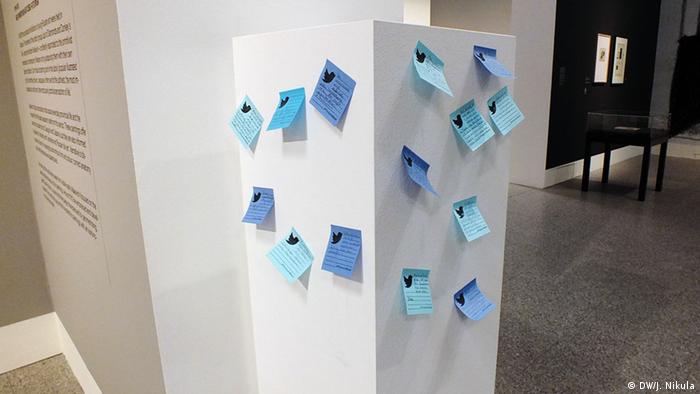 That's why Andrea Niehaus, who heads the Deutsches Museum in Bonn, thinks of MuseumWeek as an experiment.

For the seven days, her museum experimented with Twitter and other social media.

By week's end, the two white pillars in the Bundeskunsthalle were covered in blue notes: displaying insights into the art, or words of praise for the museum's architecture. The MuseumWeek visitors are a creative lot.

Siebert is pleased with the feedback. She's taken photos of some of the statements and plans to post them on Twitter.

Blackphone, a new mobile device aims to give users more security to protect them from the snooping eyes of hackers and digital spies. But can it really guarantee the security of its users? (24.02.2014)

No one walks by Berlin's massive concrete blocks without pausing to reflect. The Holocaust Memorial is world famous - and now it offers a unique musical experience via iPhone. (20.02.2014)