Catalan separatists claim national authorities are trying to manufacture "a violent narrative" in the movement. Tensions are high ahead of a ruling against 12 leaders of a failed secession bid. 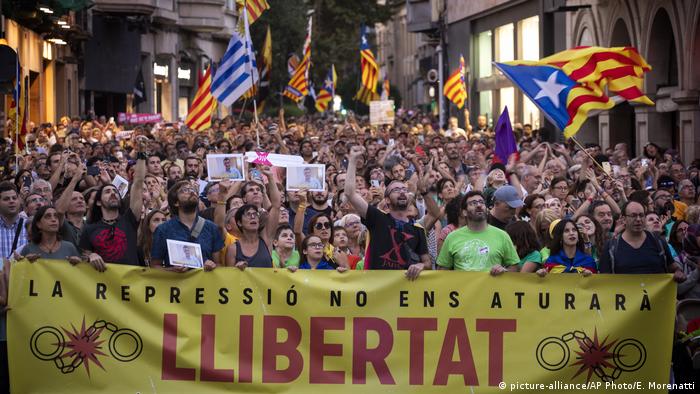 Thousands of people protested near Barcelona on Saturday, upset about the jailing of seven Catalan separatists on suspicion of planning terrorist attacks.

Police said 12,000 marched in Sabadell, the hometown of some of the arrested separatists, walking behind a banner that said "The repression won't stop us. Liberty."

On Monday, police arrested seven members of the Catalan independence movement for allegedly belonging to a terrorist organization, manufacturing explosives and conspiring to wreak havoc. They have been held awaiting trial.

Protesters marched to the Sabadell town hall and demanded the separatists' immediate release, with leaders of the Libertad Detenidas 23S group claiming their incarceration was part of a political attempt to quash the peaceful independence movement.

Tensions are running high in Catalonia ahead of a Supreme Court verdict on the 12 leaders of the region's failed 2017 bid for independence. If they are found guilty, it will likely spark more protests.

Catalonia's pro-independence parties this week demanded the withdrawal of national police from the region and amnesty for the 12 leaders, while endorsing civil disobedience campaigns.

Inside Europe: Spain heads to the polls - again

This prompted the federal government to warn against further pushes for secession. "This government is not willing to accept any attack ... on the constitution," warned government spokeswoman Isabel Celaa.

Torra said that by arresting the seven alleged terrorists, authorities were trying to "establish a violent narrative ahead of the verdict" on the 12 separatists on trial.

The alleged use of violence during the 2017 crisis is central to the prosecutors' case.

It's known as the "Diada." Since 2012, huge rallies for independence have taken place on September 11 in Catalonia. The size and tone of the latest edition will be a gauge for the strength of the separatist movement. (11.09.2019)

The Spanish separatist has scuppered a ban on contesting the European elections. A court ruled he still has a fundamental right to contest the election even though he has fled the country and faces arrest if he returns. (06.05.2019)