Traffic on a major highway between Spain and France remained at a standstill despite attempts to clear a blockade by Catalan activists. Police arrested dozens, including a truck driver who tried to force his way through. 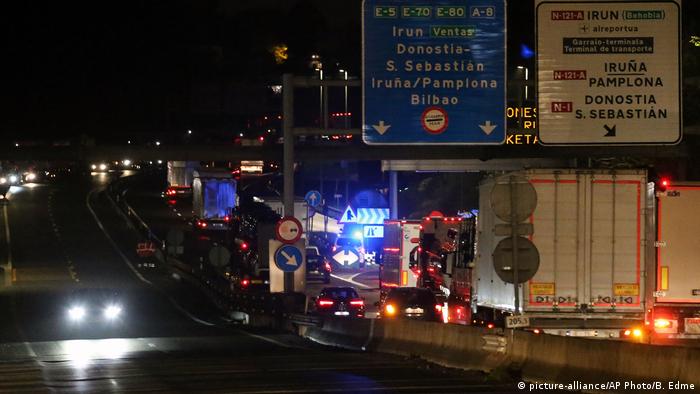 Police carried out an operation to break up a protest by Catalan pro-independence activists on Tuesday, but the highway blockade reformed just hours later.

French, Spanish and Catalan police intervened to clear the protest at a border point on the AP-7 highway, which blocked traffic and caused major delays for over 24 hours.

The Catalan police, the Mossos d'Esquadra, said they'd arrested a man for attempting to run over people when he tried to force through the blockade with his truck.

Hours after the police operation to clear protesters, the Catalan Traffic Service said that protesters were once again blocking the AP-7 highway. The Democratic Tsunami, a Catalan civic group, claimed responsibility for the disruption. The group wrote on Twitter that both Catalonia and the Basque Country, another region with a separatist movement, "are living in an unsolved political conflict with the Spanish state."

The secretive group began organizing protests after the Spanish Supreme Court sentenced nine Catalan secessionist leaders to jail last month for their role in the illegal independence referendum in 2017.

The group previously organized an occupation at Barcelona's airport and coordinates its actions using a mobile phone app.

The northeastern region of Catalonia, and its capital Barcelona, is one of the wealthiest regions of Spain, accounting for almost 20% of Spain's economy.

The highway protests have come on the heels of Spain's general election on Sunday, which saw acting Prime Minister Pedro Sanchez' Socialists win the biggest share of seats but fall short of a majority. On Tuesday, the Socialists announced a coalition deal with the leftist Unidas Podemos.

The far-right Vox party saw its support surge in the election, jumping up to become the third-largest party in parliament, after running on a platform of taking a harsher stance against Catalan secessionists.