Pro-independence protesters in Catalonia have blocked a major highway between France and Spain, halting traffic in both directions. The campaign group Democratic Tsunami urged its supporters to gather there. 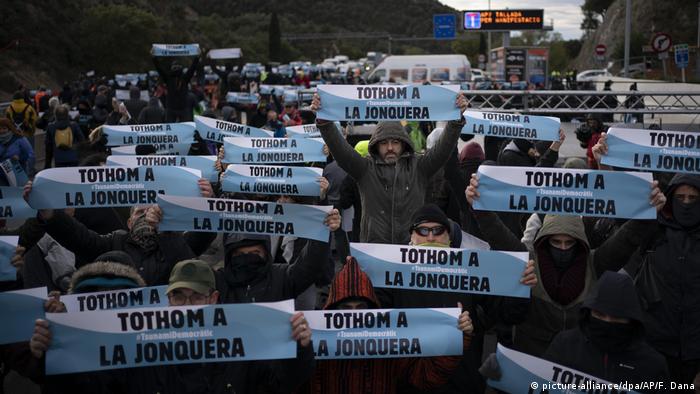 Scores of protesters cut off a major highway at the French-Spanish border on Monday, stopping traffic moving in both directions.

Some 80 people blocked the road at La Jonquera on both the French and Spanish sides — after a call to gather there by campaign group Democratic Tsunami.

The group said it was seeking to bring an international focus to cause of Catalan independence.

"Today we start a new way of protest, using technology to defend rights and collective freedom, instead of repression and control," said one tweet, posted in English.

Democratic Tsunami was responsible for several protests last month, including one that caused disruption to road and air traffic at Barcelona airport. That protest followed the jailing of several Catalan politicians for their part in an effort to declare independence from the Spanish state.

The latest protest came a day after Spain held a general election that saw Pedro Sanchez's Socialists emerge as the biggest party — on 120 seats — but short of a majority and struggling to make up the numbers with a progressive coalition.

The big winner on the day was the far-right Vox party, which became the third largest force in parliament winning five seats.  The conservative Popular Party was the second largest force, with 88 seats.