How do Germans like to get around? That's the question the Transport Ministry asked in a nationwide poll. That the car still dominates is perhaps unsurprising but that doesn't help the nation's green goals. 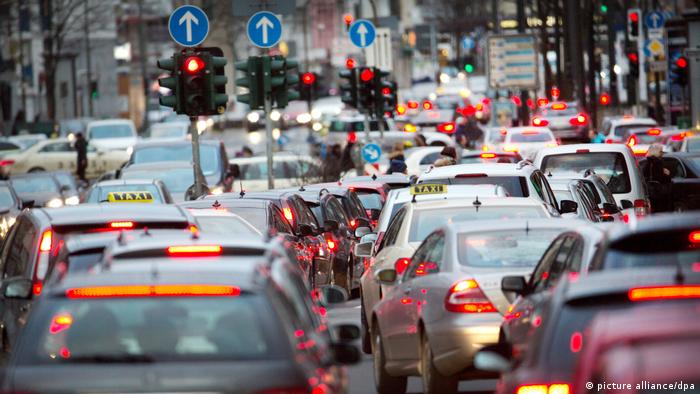 Cars are still the favored mode of getting around for Germans, with the nation's private vehicle fleet growing to 43 million, despite efforts to promote greener forms of transport, according to a new government report.

The German Transport Ministry polled more than 150,000 households nationwide to find out how often people leave their homes, what distances they covered on an average day and their preferences for getting from A to B, including by foot, public transport, private vehicle and bicycle.

According to the survey, which the goverment bills as the world's largest ever on a nation's mobility, the growth in car use means that on average there is now more than one vehicle in every German household.

The biggest increases in car ownership were registered in eastern Germany and rural areas across the country. The study also points out that of privately-owned cars, the share of SUVs and cross-country vehicles reached 20 percent last year, up from just 10 percent in 2008.

The findings on car usage don't bode well for Germany's ecological footprint as all-electric vehicles constitute only a negligible percentage in the mix. That's despite efforts by the German government to get 1 million electric cars on the road by 2022.

Car sharing to the rescue?

Car sharing could be a way forward, and indeed, every tenth household in large cities is a registered member of a car sharing service. But of those registered, four in 10 people almost never use such services and hardly anyone uses them regularly throughout the year, the poll shows.

Using public transport is only a big topic in urban areas, where it has grown dynamically over the last decade. Still, it only accounts for 10 percent in the "getting around" mix.

What's worse is that when asked about their subjective views on various mobility services, Germans said public transport, such as bus and train services, were lousy, indicating they would not use them, if they didn't have to.

Compared with 2008, cycling from A to B has gained momentum, with the overall number of kilometers cycled increasing by one-fifth over the past nine years.

The authors of the study added it was also gratifying to see so many people still willing to cover shorter distances by foot.

Despite the total population in Germany rising from little under 81 million in 2008 to some 83 million in 2017, the total number of kilometers covered last year edged up only slightly to 3.2 billion kilometers (1.99 billion miles).

It's the third time the ministry has commissioned such a mobility study, after the release of similar surveys back in 2002 and 2008.

The aim of the poll is to enable researchers to not only analyze the current state of affairs, but also identify trends and shifts in behavioral patterns.

The overall picture, shows car traffic in front by a wide margin, including a tendency for people to use their cars more as they get older.

The study concludes that a trend reversal is not really in sight despite recent efforts to enhance the attractiveness of alternative means of transport. But considering plenty of cars will remain on the roads in Germany, more resources should be put into making vehicles cleaner and, thus, lessen the burden on the environment, the survey said.

There seems to be no end to the German scandal involving carmakers' emissions-cheating endeavors. Now the first partial diesel-engine driving bans are being introduced. Are privately-owned cars soon a thing of the past? (28.05.2018)