He left Germany for the US with only a few dollars and became one of the great pioneers of Hollywood: Carl Laemmle's life would be worth a movie in itself. This nearly forgotten producer was born 150 years ago.

He was only 17 years old when he left his home town, Laupheim in Swabia, to live in the US in 1884. No one could have then predicted that Karl Lämmle - who changed his name to Carl Laemmle - would become one of Hollywood's most successful producers 50 years later.

Films opened with the credits "Carl Laemmle presents…" in theaters worldwide in the 1920s. The Haus der Geschichte Baden-Württemberg, a history museum in Stuttgart, showcases a special exhibition on this Hollywood pioneer who was born 150 years ago on January 17, 1867. The museum is featuring exhibits from the US and his hometown as well as from all over the world.

Laemmle started out in New York as an errand boy. He later ran a textile company in Wisconsin and invested his profits in film theaters. He later founded a film distribution service.

In 1910, he started his first film production company. Laemmle challenged the Motion Picture Patents Company's monopoly and co-founded with other companies what is now known as Universal Studios.

Laemmle moved to the West Coast of the US in 1914, where the wages were lower and the sun would shine more often. He bought a huge 170-hectare (420-acre) ranch in a then deserted area near Los Angeles to set up the Universal City Studios. With this property, he contributed to establishing the motion picture industry in Hollywood. 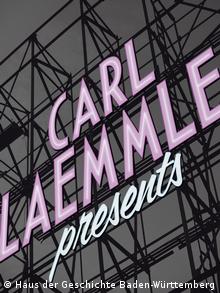 Right from the start, he added his name to the opening credits

To this day, movie hits such as "King Kong," "Psycho," "Jurassic Park" and "Spider Man" are being filmed at Laemmle's studios.

Laemmle's catchy slogans contributed to his career - the main one being: "It can be done!" His marketing strategy worked: He orchestrated huge media events such as the two-day grand opening of Universal City in 1915, attended by 10,000 people. He promoted the star system and quickly understood that motion pictures were an international business.

As the producer behind films such as "The Phantom of the Opera," "Dracula," "The Mummy," and "Frankenstein," he also contributed to the popularity of horror as a film genre.

Laemmle and his Universal Pictures produced over 10,000 movies within a few decades, including great classics such as "Uncle Tom's Cabin" and "All Quiet on the Western Front."

Without Carl Laemmle, Hollywood as we now know it would not exist, said Ron Meyer, Vice Chairman of NBC Universal at the exhibition in Stuttgart.

Clear stance against the Nazis

The exhibition also deals with Laemmle's difficult relationship with his home town Laupheim, which he revisited after becoming a US citizen. As the "rich uncle from America," he also made major donations to the community. However, as the popularity of the Nazis started to grow, Laemmle's reputation there started to suffer. As a Jew, he lost his honorary citizenship in the town that had named one of its streets after a Nazi in 1933.

After producing the anti-war epic "All Quiet on the Western Front" in 1930, he was banned from traveling to Germany altogether. The film's relentless depiction of World War I set new cinematic standards. It won two Oscars and is still considered one of the best movies ever.

Carl Laemmle was forced out of the company in 1936 during the Great Depression and spent the last years of his life dedicated to saving Jewish families. Until his death in 1939, he pledged for over 300 Jewish families, allowing them to flee to the US, thereby saving them from death in concentration camps.

The exhibition celebrates the Hollywood pioneer who was born a century-and-a-half ago with a sweet tribute: Carl Laemmle loved cake. Every time he'd celebrate his birthday, he would have a cake that would weigh as many pounds as his age. Pictures of his legendary parties and cakes lead visitors through the show.

The exhibition "A Swabian Jew Invents Hollywood" runs through July 30, 2017 at the Haus der Gechichte Baden-Württemberg in Stuttgart.

At 100, Kirk Douglas has lived the American Dream

Kirk Douglas' life is quite literally a rags to riches tale. The headstrong actor has sparred with Hollywood and survived a stroke - and is now turning 100. (08.12.2016)

Although critics were disappointed when "I, Daniel Blake" snagged the Palme d'Or in Cannes, one only needs to see Ken Loach's film to understand why it moved the jury so deeply. It's now up for a European Film Award. (09.12.2016)

The European Film Awards are still overshadowed by the Oscars - but that's not due to the quality of the films, says DW's Jochen Kürten. (09.12.2016)