At least three civilians were wounded when a suicide car bomb targeted a convoy of foreign forces in Kabul. The Taliban has taken responsibility for the attack and claimed it killed 16 American soliders. 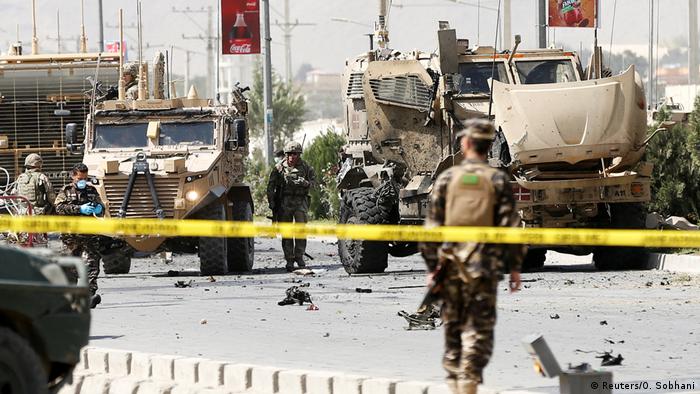 The number and extent of Afghan civilian casualities remained unclear on Sunday in the hours following a car bomber attack on a Danish convoy belonging to the NATO-led Resolute Support mission in Kabul.

At least three civilians were wounded when a Taliban suicide car bomber hit the convoy that was in the western part of the Afghan capital. Afghan officials did not report any civilian fatalities, though Reuters cited a Danish military spokesperson who said that some civilans may have been killed. 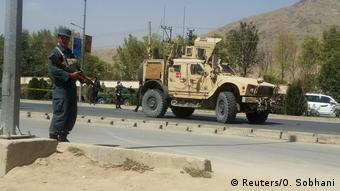 Photos showed the charred and twisted ruins of a car next to a convoy vehicle that appeared to have structural damage on one side.

The Taliban took responsibility for the attack, claiming it had killed and injured up to 16 American soldiers. However, the insurgency — which is fighting NATO troops and Afghan government soldiers, as well as the so-called "Islamic State"  — has been known to exaggerate fatalities.

Captain William Salvin, a spokesman for the NATO mission, confirmed that no international service personnel had been injured.

"There are no Resolute Support casualties as a result of the explosion," he said, adding that he attack would not impact the mission's operations.

Denmark is one of about 40 countries that are part of the Resolute Support mission that offers training, advice and assistance to Afghan security forces to counter the Taliban militants.

A total of some 13,000 NATO are in the country. US President Donald Trump recently announced an increase in American troops for the mission.

Dozens dead after 'IS' attack on Shiite mosque in Kabul

Islamic State fighters have killed several people and injured many more at a Shiite mosque in Kabul. The attack lasted for four hours before security services could kill the assailants without harming hostages. (25.08.2017)

Germany is a highly-coveted partner on the international stage. As a respected global power, it needs a strong mandate from the upcoming elections, says former Afghan President Hamid Karzai. (05.09.2017)

Going against his election promise, Donald Trump decided to keep US troops in Afghanistan for an indefinite period of time. To what extent is this policy change a result of Trump's interest in Afghan mineral wealth? (29.08.2017)