The wreck of the vessel Captain James Cook used to sail to Australia has been located in Newport Harbor, Australian archaeologists say. But their US research partners are neither convinced, nor amused. 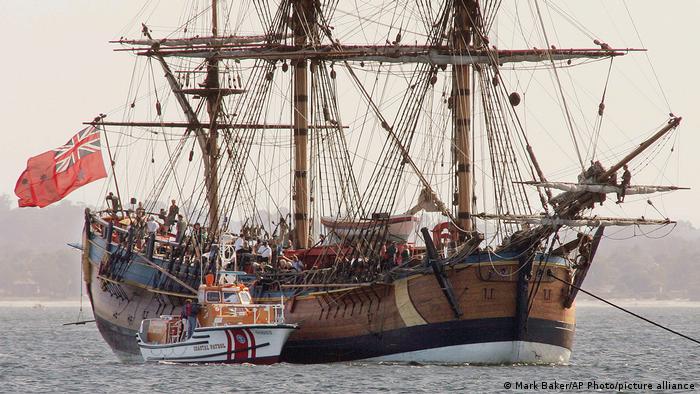 The wreck of British explorer Captain James Cook's HMS Endeavour, the vessel in which he sailed in a historic voyage to Australia and New Zealand between 1768 and 1771, has been found off the coast of the US state of Rhode Island, Australian researchers said on Thursday.

"Since 1999, we have been investigating several 18th-century shipwrecks in a 2-square-mile area where we believed that Endeavour sank," Kevin Sumption, director of the Australian National Maritime Museum, told a Thursday media briefing.

"Based on archival and archaeological evidence, I'm convinced it's the Endeavour," he added, calling the vessel one of the "most important and contentious" in the maritime history of Australia. "The focus is now on what can be done to protect and preserve it."

The museum said only about 15% of the vessel, which holds an iconic status in white Australian history and a contentious one in that of the continent's Indigenous peoples, had survived two centuries under water.

Cook has remained revered as a navigator, but his explorations served to advance colonialism

But the US team of researchers also involved in efforts to locate the vessel have slammed the announcement as premature.

In a statement, the executive director of the Rhode Island Marine Archaeology Project, DK Abbass said the Australians were guilty of a "breach of contract," adding that "conclusions will be driven by proper scientific process and not Australian emotions or politics."

"What we see on the shipwreck site under study is consistent with what might be expected of the Endeavour, but there has been no indisputable data found to prove the site is that iconic vessel, and there are many unanswered questions that could overturn such an identification,'' Abbass wrote. `"When the study is done, RIMAP will post the legitimate report.''

The Australian museum, in its turn, denied violating any partnership agreement, with a spokesperson saying Abbass was "entitled to her own opinion regarding the vast amount of evidence we have accumulated."

If the wreck in question is indeed the Endeavour, it had long lain forgotten in Newport Harbor since the ship was scuttled by the British in August 1778 to block a French fleet from entering the harbor to support the Americans in the War of Independence.

The ship, a flat-bottomed Whitby collier well-suited to sailing in shallow waters, was first launched as the Earl of Pembroke in 1764. Four years later, it was purchased by the British navy and fitted out for a major scientific voyage to the Pacific under its new name of Endeavour.

From 1768 to 1771, the Endeavour sailed the South Pacific, with Cook charting the coastline of New Zealand — where his crew killed several Maori people — and that of eastern Australia. He later claimed the entire land for Britain in 1770.

That claim was followed in 1788 by the arrival of the so-called First Fleet carrying hundreds of convicts to establish a British colony.

Cook himself was killed in Hawaii in February 1779 while attempting to detain its ruling chief, just months after his former ship was sunk.