Canceled by COVID-19, US-German exchange students face an uncertain future | Germany | News and in-depth reporting from Berlin and beyond | DW | 24.03.2020

Amid travel bans and warnings on both sides of the Atlantic, organizers of exchange programs scrambled to get their young participants back home. Those affected describe an experience marred by confusion and frustration. 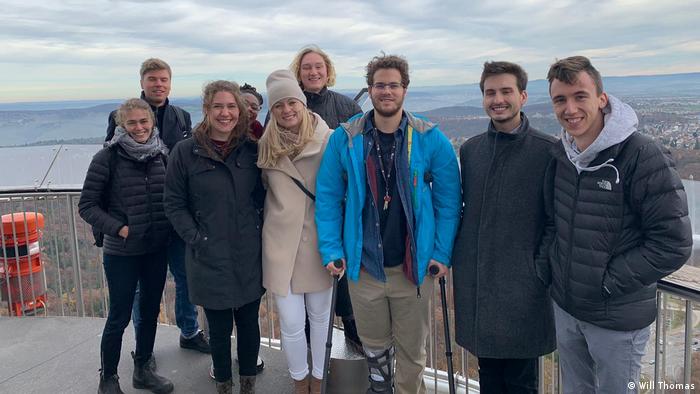 They still had about three months left in Germany when the decision came through. On March 12, the US State Department announced a "temporary pause" to all international exchange programs due to the COVID-19 outbreak. That led not only to an abrupt end to internships, study and personal relationships, but an urgent need to get hundreds of German and American youths home.

At least one group protested. It comprised 75 Americans on the young professionals track of the Congress-Bundestag Youth Exchange (CBYX), an annual program of language and academic study, professional experience and host-family stays, supported by both countries' legislatures. In a statement, many in the group cited the risk posed by international travel — which both the State Department and Germany's Foreign Office now strongly discourage — as well as uncertain living situations awaiting them.

DW reached out to CBYX participants. Those who replied expressed frustration with losing housing, health insurance and jobs in Germany.

"I signed an internship contract that would then turn into a permanent position at an immigration law firm in Frankfurt," Mary Pat Taylor told DW. The 25-year-old from Pittsburgh said the firm would have sponsored a residence permit. Instead, the program's visas were canceled immediately, leaving participants with no choice but to leave.

"Had the program given me the opportunity or support to pursue alternative options, I may have had the time to acquire a company-sponsored residence permit while working on my program-sponsored visa," she said. "This was and is a question of my future, something I deem more important than the completion of the program."

Taylor said her short-term job prospects in the US are "dismal."

Almost universally, participants who spoke to DW acknowledged the extraordinary circumstances program organizers were facing and the immense time pressure they were under, but criticized what they saw as conflicting information, lack of empathy for their home situations, and a gap of several days between announcing the program's end and arranging return flights. The German group had returned to Germany a few days after the program's curtailment.

"The organization should have had flight plans in place before causing chaos and panic by informing us that we would need to be ready to leave immediately," Taylor said.

The State Department and the Bundestag made the decision to end the program jointly, a US Embassy spokesperson in Berlin told DW. "Both countries were no longer able to provide an appropriate exchange experience," he said.

Asked about visas, a Bundestag spokesman would only confirm the groups lost their right to stay in the host countries once the programs ended. "US authorities urgently requested that their citizens return home," the spokesperson told DW.

A test result that will never come

Almost all the American participants are now in the US, but Will Thomas is an exception. The 22-year-old from Atlanta remains in isolation in Tübingen, in southwestern Germany, because he was exposed to coronavirus at work. The program has paid for a short-term rental, he told DW, and his host parents have been delivering him food and supplies.

Read more: Getting Germans involved in foreign culture policy for 10 years with 'kulturweit'

"What's frustrating about all this for us is the lack of transparency and feeling like we're being whipped around without knowing who is pulling the strings," he said, referring to the program's insistence on a US return. 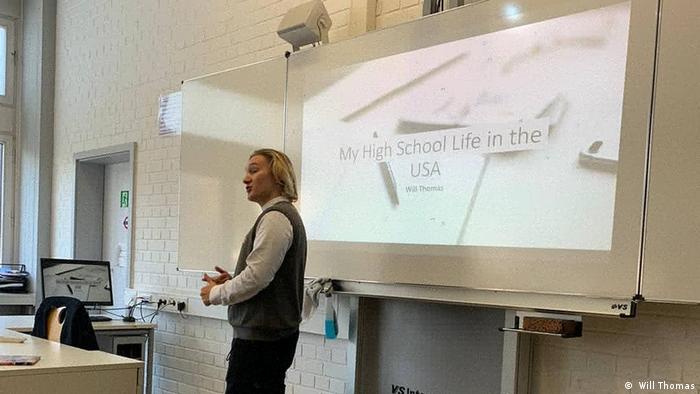 Will Thomas had to remain in isolation in Tübingen, southwest Germany

Thomas said he was tested on March 14. After days of delays, he learned his test was part of a batch of 2,000 tests, which local authorities on Sunday reported is no longer viable, due to a lab error. On Monday, however, he told DW that local health authorities called him again to say the opposite: His test could be processed and he was positive, despite showing no symptoms. If he remains asymptomatic by Saturday, when his quarantine ends, he is free to travel.

"I'm ready to go home," he said, although that likely means another two-week isolation period once he gets there, just as other participants have had to do.

Some of them are isolating themselves at hotels, either because travel restrictions have made it difficult to get home or because they are concerned about spreading the virus to friends and loved ones, should they have picked it up in Germany or in transit.

The CBYX program is not covering these costs directly but is assisting with a $5,000 (€4,640) stipend. Participants told DW it is intended to pay for health care and transition costs. The money is a welcome cushion, they said, "but $5,000 can't cover everything if you have to eat, need a place to live, need health insurance," participant Abby Phelps said.

Faced with dwindling flights and increased restrictions, Phelps was one of about 10 participants who decided to organize her own flight before the program did. That meant paying out of pocket without reimbursement from the program.

Read more: EU closes borders to foreigners to halt coronavirus: What to know

"If I had to leave no matter what, then I wanted to just get it done," the 22-year-old graduate of the University of North Carolina at Chapel Hill told DW. "I wanted to get back to my [younger] sister." The two are now self-isolating at their parents' home in North Carolina, she said.

"All the travel is not the best way to prevent the spread of the virus," she added.

Cultural Vistas, the State Department's partner NGO that runs the CBYX program, declined to comment. "The health and well-being of our exchange participants, hosts and staff is our highest priority," reads a website statement dated March 12.

Germany's agency for international cooperation, the GIZ, which serves as the program's on-the-ground contact, also declined to comment. Participants generally praised its support in offering mental health advice and dealing with apartment contracts that had to be ended quickly.

The US-bound flights departed from Frankfurt. That meant participants like Tessa Fenstermaker, who was living in Berlin, had to take a long-distance train to get there. After arriving in the US, the 21-year-old from outside Cleveland, Ohio, then boarded a connecting flight. She said she is staying with friends during the isolation period.

"We're going back to somewhere we might not recognize," Fenstermaker told DW, the night before she left.