Canada flexes military muscles in race for Arctic resources | World| Breaking news and perspectives from around the globe | DW | 01.08.2011

With international efforts to secure territorial rights around the North Pole heating up as the ice in the Arctic continues to melt, Canada is flexing its muscles to defend its sovereignty in the region. 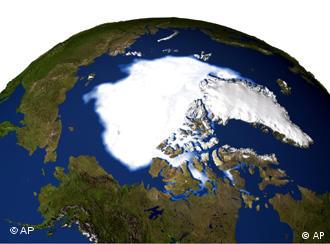 As the Arctic ice melts, greater opportunities are revealed

The Canadians have been gradually extending their military presence in the region in the face of incursions not only by Russian vessels and forces but also those of the US, Norway and Denmark, which are also laying claim to expanded territories exposed by the shrinking ice.

"Canada's military spending and movements are less about a threat perception and more an assertion of authority," Christian Leuprecht, associate professor of political science at the Royal Military College of Canada in Ontario, told Deutsche Welle.

"International law dictates that a country's rights to territory in the Arctic is dependent on its ability to protect it."

The reduction in Arctic ice will open up new navigation channels but in most cases, this will not cause too much friction as all the competing nations are in agreement over their "exclusive economic zones" (EEZ) which stretch 200 nautical miles from their coastlines.

The real area of conflict is below the waves and - at least for now - the ice. The main attraction for the competing nations is the Arctic region's vast natural resource potential. It is believed that over 90 billion barrels of oil and untold quantities of natural gas are buried under the soon-to-be ice free North Pole.

Natural resources up for grabs 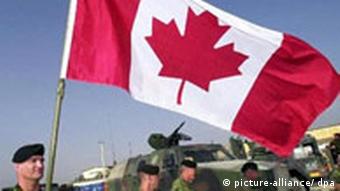 Canada is ready to mobilize its troops to protect its claim

This huge sunken treasure trove of hydrocarbons has led to a modern-day gold rush with the United Nations struggling to find a way of resolving the territorial contest peacefully before the heavily-armed competing nations start laying unregulated claims all over the region.

Russia has already deployed two brigades of about 10,000 specially trained Arctic-troops to "protect Russian interests," specifically its base on the Yamal Peninsula in the northwest of Siberia which would be a perfect hub for any oil or gas pipeline coming into Russia from the Arctic.

"In 2008, Russia adopted a document on Russian Federation Policy in the Arctic until 2020 which included the creation of a contingent of conventional forces in the Arctic region," Stanislav Secrieru, associate researcher at the Center for East European and Asian Studies in Bucharest, told Deutsche Welle.

Russia recently dispatched a scientific expedition led by a nuclear powered icebreaker to the region in an attempt to prove, once and for all, that the whole region is part of Russia's continental shelf. And this is where the biggest point of contention lies as it is thought that the disputed seabed sits on top of about 13 percent of the world's untapped oil reserves.

Under the1982 UN Convention on the Laws of the Sea (UNCLOS), countries can claim extended territorial sovereignty under the sea if the seabed they are looking to acquire can be proven to be "natural prolongations" of their continental shelves. 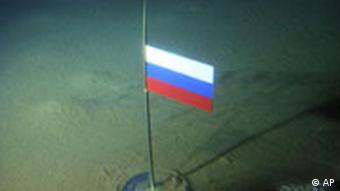 Russia made an audacious claim to the seabed in 2007

The rules, however, are as murky as the Arctic depths in which the competing nations are trawling. The convention's regulations may yet lead to one nation legally laying claim to the Arctic seabed but the complexity of ascertaining the authenticity of the claim could prolong the increasingly bitter argument over who will end up owning the resource-rich region.

In 1925, Canada laid claim to an expanse of the region between Alaska and Greenland that stretched to and included the North Pole. The Soviet Union entered an even bigger Arctic claim some months after that. The animosity between the two nations over the region has been slowly growing ever since.

When a Russian submarine planted a titanium flag on the ocean floor at the North Pole in 2007, Canada reacted angrily: "This isn't the 15th century," Peter MacKay, Canada's foreign minister at the time, said. "You can't go around the world and just plant flags."

More recently, MacKay's successor Lawrence Cannon, while on a visit to Moscow in October last year, told his Russian hosts in no uncertain terms that "the Arctic is part of us. Was. Is. And always will be."

"Russia's relations with Canada are 'standard' as in they are not particularly bad but they are not excellent either; partly because of the North Pole claims, but also because Canada is an active NATO member and open to NATO enlargement to Eastern Europe," Jana Kobzova, a Russia expert at the European Council for Foreign Relations, told Deutsche Welle.

Christian Leuprecht says the Arctic issue is a very patriotic topic in Canada.

"The Arctic is part of the country's national identity and it is a topic that severely limits the options any Canadian government has because Canada will always been insistent of its claim. Anyone who is weak on Arctic issues is basically committing electoral or political suicide in Canada," he said.

According to Secrieru, there's more at stake for Russia. "The energy and economic benefits aside, this also boosts its post-Soviet identity building effort, enhances the domestic image of a strong leadership and sends a message of strength to NATO rivals." 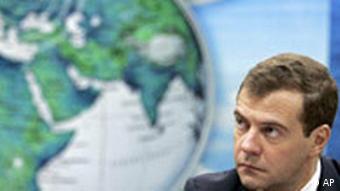 President Medvedev has his eye on Arctic dominance

Russia's decisiveness has certainly caused alarm in Canada. Moscow has already stolen a march on Ottowa by submitting its application to extend its continental shelf six years earlier than it needed to. Countries making the claim for an extension have 10 years from the time they ratified the UNCLOS to do so.

Russia's current exploratory team is expected to resubmit the necessary data in support of their claim within the next two years, which will coincide with Canada's deadline of December 2013, potentially prompting a frantic scramble to see who can table their findings first.

The UN may yet manage to carve up the region fairly using the scientific data that each competing country submits. But there is concern that while the UN is wading through the measurements and permeations, someone may choose not to wait and establish their claim to the region through force.

"What is concerning and what can be seen as a security threat is the presence of the Chinese in the Arctic," Leuprecht concluded. "If anyone can be seen as an 'adversary' nation, it's China. Chinese 'research' in the area has not been clarified and it's widely believed they are mapping resources there outside of international agreements."

A small clique of northern countries currently governs the Arctic Circle. But as the Polar Ice Cap melts, external powers have expressed an interest in the energy-rich region, raising eyebrows among the Arctic nations. (06.09.2010)