Nations bordering the Arctic are set to agree on steps to exploit the region. But with climate change paradoxically making it more accessible to energy companies, some are asking if we are ready for an Arctic oil spill. 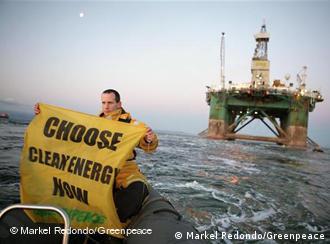 An oil bonanza in the Arctic could be one step closer this week.

On May 12, the Arctic Council will hold its 7th Ministerial Meeting in Nuuk, Greenland.

Among other things, the organization - which includes the United States, Canada, Russia, Sweden, Finland, Denmark, Iceland and Norway - is expected to sign the first legally binding Arctic search-and-rescue treaty, an important step towards assigning responsibilities for previously inaccessible tracts of ocean.

The accord is the council's reaction to increased shipping in Arctic sea lanes, as well as to growing interest in the oil and gas reserves, which climate change has rendered more accessible.

Scientists believe that up to 13% of the world's not-yet-discovered oil reserves will be found in the Arctic.

After the massive oil spill in the Gulf of Mexico, many people thought the plans to drill for oil in the Arctic would be put on ice once and for all.

Yet barely a year later, the oil industry is venturing ever deeper into the once-impenetrable region and environmental groups are sounding loud warnings about the dangers of a possible catastrophe on the fragile Arctic ecosystem.

Moving ahead - despite warnings 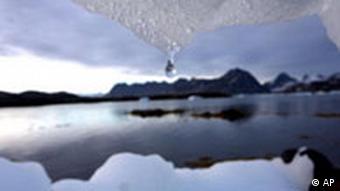 Melting polar ice is a game-changer for Arctic exploration

According to a US government report, a spill in the Chukchi Sea could release huge amounts of oil off the coast of Alaska, and the magnitude of such an accident could easily exceed the industry's disaster-management abilities.

Despite this, an oil-drilling platform near Istanbul, Turkey, is slated to be brought to Greenland to do deep-sea test-drilling for the Scottish company Cairn Energy. In late April, activists from the environmental organization Greenpeace occupied the platform.

John Farrell, the executive director of the US Arctic Research Commission, says further oil exploration in the far north is unavoidable, but he thinks the catastrophe in the Gulf of Mexico "raised the level of interest and concern" over the risks associated with drilling in "new frontier areas" such as the Arctic.

As a result, he thinks people are much more conscious of the need to study the region before further economic exploitation takes off.

"How well do we understand the natural environment, the oceanography, the ecosystem?" Farrell said, adding that there needed to be a "baseline of understanding in these environments, should there be a spill, or a need to address a problem in these waters."

But with Arctic warming occurring much faster than elsewhere on the planet, it is increasingly unlikely that scientific research will be able to keep up - let alone win - the race against economic exploitation of the region's resources.

Aqqualuk Lynge is the leader of Greenland's Inuit people and the head of the Circumpolar Council, a group that advocates careful exploitation of the Arctic's natural resources.

He believes the pace of development is too fast, and doubts the industry is prepared for a disaster in his backyard.

"I'm asking: Is there the technical capability today to drill in Arctic waters, where many of the seals and whales others care about are located?" Lynge said. "Did we ask oil companies to conduct a study of the environmental impact first? No!" 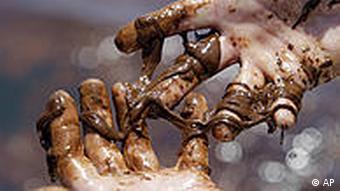 Both drilling and transportation of oil in the Arctic poses an enormous challenge to security and infrastructure in the region, environmentalists say.

Jörn Harald Andersen has been an adviser to the Norwegian Clean Seas Association, NOFO, which is responsible for oil response for companies operating in Norwegian waters. He says the further north a company goes, the more difficult those challenges become.

"When we move north we have to deal with less daylight in winter," Andersen said." Visibility is low, there is more haze, fog and mist, and the low temperatures can cause sea spray to ice-over the equipment."

He says moving people and equipment is more difficult the further north you go, due to poor infrastructure, yet he remains convinced that his group would be able to cope with an accident, even in the icy Arctic.

"The first oil field will be in production in the north in 2013 - the Goliath field - and we have a campaign to develop new technologies, fishing boat response systems, and remote sensing equipment for low visibility and darkness," Andersen said.

But Amy MacFadyen, an oceanographer with the emergency response team from the US National Oceanic and Atmospheric Administration, has her doubts. She was involved in the cleanup operation in the Gulf of Mexico and she says a spill in ice-covered Arctic waters would be very different to deal with - although not impossible.

"It's a problem for mechanical cleaners, skimmers …Some techniques that work in open water would not be effective in closely packed ice," MacFayden said. "But other technologies can detect oil under ice, like ground penetrating radar…I'd say this active area of research must be continued." 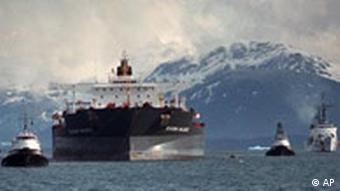 Environmental protection groups, such as WWF and Greenpeace, on the other hand are far from impressed with the oil industry's preparation for an 'Arctic incident.'

They say the planned search-and-rescue responsibility pact that the Arctic Council wants to sign won't change that, either.

Frida Bengtsson from Greenpeace in Norway argues that the vast Arctic region is difficult to access, and notes it would take a long time to react to an oil spill from a drilling or transportation accident.

"I think that will pose the biggest threat to the immediate Arctic system, but there's also the long-term effects of climate change, of burning that oil that you find. We're worried about both," Bengtsson said.

The paradox of seeking fossil fuels in a region that is warming out of control thanks to climate change isn't lost on US Arctic Research chief John Farrel. Indeed, the speed of global warming is particularly evident in the Arctic, with its melting polar ice caps, warming permafrost, and coastal erosion, Farrell said.

"It is a very dynamic region because of anthropogenic climate change, and so that is changing the north as well as the increased pressure that comes from the growing economic activity in the region," he said.

That's why Inuit representative Lynge is actively working to slow down the pace of development in the Arctic.

"I still need to see politicians in Greenland and elsewhere in the Arctic saying 'Let's wait a little and see what's going to be the result in 10 years, with the Arctic melting, to see what happens to our direct environment,'" Lynge said.

"Sea levels are rising in our area very fast, and we see changes as they come. We have an immediate mirror of climate change."

Meanwhile, plans to do test drilling off the coast of Greenland recently won government approval, despite Greenpeace protest actions.

The Arctic Council may be meeting this week to discuss rules and regulations for this new frontier, but its long-term fate will ultimately be decided by how the world quenches its thirst for fuel.

In an interview with Deutsche Welle, Norway's foreign minister says nations will need to agree on codes of conduct for exploiting the Arctic, as climate change opens new possibilities in the region. (25.01.2011)