Festivals like Tallinn Music Week blur the lines of segregation between Estonia's Russian-speaking minority and the rest. Yet outside of culture, many problems persist. 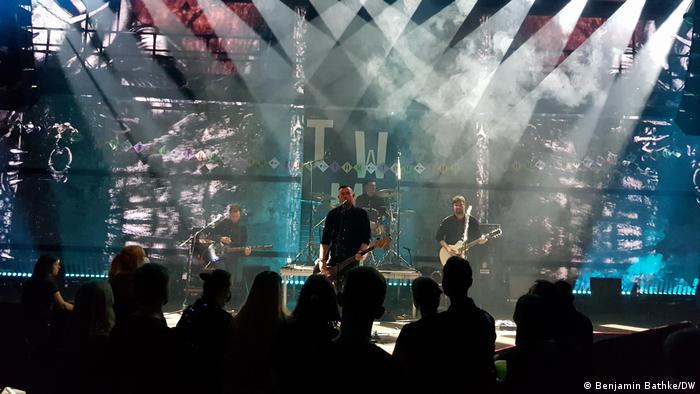 The four bands were among 176 acts from 21 countries that wowed crowds from last Thursday to Sunday at Tallinn Music Week. Launched in 2009, the annual culture festival and international music showcase also features a conference for music and creative industry professionals.

This year, 18 acts hailed from Russia, the second-most behind Estonia. But it's not just during Tallinn Music Week that Russian sounds reverberate through Tallinn's medieval streets: Russian-speaking Estonian artists have long been mainstream in the small Baltic country.

Rainday Station's four musicians were born to Russian-speaking parents in 1980s' Estonia under Soviet occupation. Drummer Kirill Harjo, who has played in several bands over the past 15 years, was part of the Russian artistic avant-garde.

"My previous band, Junk Riot, was among the first ones that gained a fanbase across the population," the 36-year-old told DW after his concert. "Growing up, I went to Russian schools and had mostly Russian friends. I didn't have many Estonian-speaking acquaintances until I started vocational school and started socializing more with Estonian colleagues. Now, I have basically 50/50 Estonian-speaking and Russian-speaking friends." 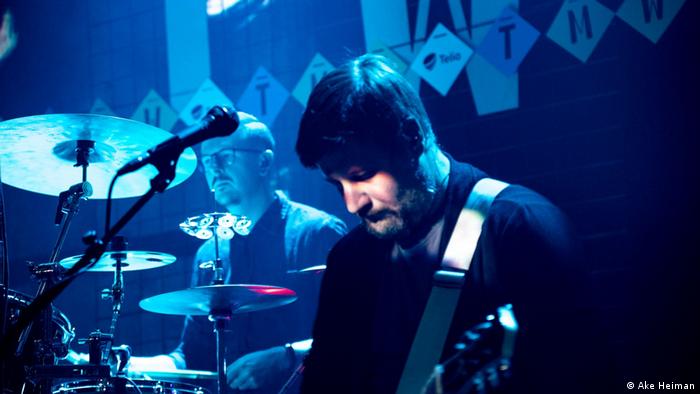 Known for its medieval Old Town, Estonia's capital Tallinn is also home to roughly half of the roughly 320,000 Russian speakers in the country. Much of the rest live in the eastern Ida-Viru county and its largest city Narva, on the Russian border.

Estonia has had a small ethnically Russian population for centuries. But the majority today originate from immigration during the 1970s and 1980s, when hundreds of thousands were brought in from the Soviet Union's four corners to work in the Kreenholm textile factory in Narva and other now-defunct industrial sites. Although some 200,000 left in the 1990s after the collapse of the Soviet Union, the Russian-speaking population remained much larger compared to the 1960s.

Today, the Russian-speaking minority makes up around a quarter of all 1.3 million people in Estonia and includes Tatars, Ukrainians, Belarusians and other ethnicities.

Anatoly Martynov sells paint-by-number kits at a pop-up shop in Lasnamae Centrum shopping mall in Tallinn's most populous and mainly Russian-speaking district, its skyline dominated by tall residential towers built from 1970-1990s. The 25-year-old is one of close to 70,000 stateless people in Estonia, most of them Russian speakers.

"When I went to Egypt, I had to stay at the border control for six hours. They didn't understand my passport, where it says I'm an alien. I was born in Estonia, but I don't have an Estonian passport. It's not normal." 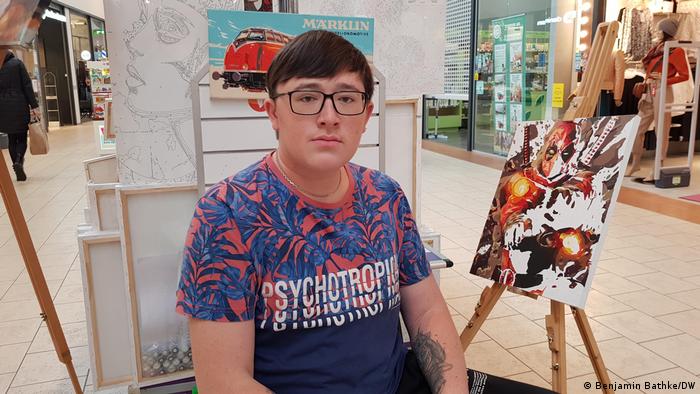 Anatoly Martynov, one of the 70,000 stateless people who live in Estonia

After regaining independence in 1991, Estonia granted citizenship only to those who lived in Estonia before 1940 — practically no one — and made the passing of a language test a condition for becoming Estonian.

Martynov says he's currently waiting for the results of his language and citizenship exams, which can take up to six months. Most of his stateless childhood friends have become naturalized over the years, he says. Had he been born today, he wouldn't have to take the test: Since 2017, children whose parents are stateless at the moment of their birth are automatically given Estonian citizenship. 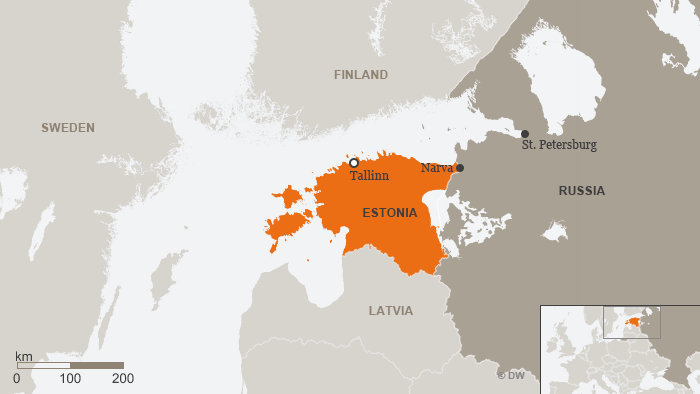 Estonia has land borders with Russia and Latvia

Difficulties when traveling aren't the only disadvantage alien status brings: Stateless people in Estonia are only allowed to vote in local elections and are barred from applying for certain government jobs.

Piret Hartman, undersecretary for cultural diversity at the Estonian Ministry of Culture, says the country's education system is the biggest reason segregation is still prevalent today. Although government policies were put in place to change this, one in four Estonian students still attend schools where all or a significant number of classes are taught in Russian. 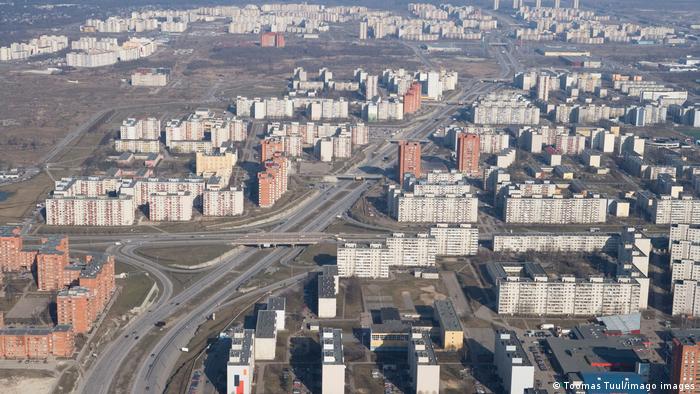 According to Hartman, one-third of Russian-speaking students don't go on to upper secondary school because they don't speak Estonian well enough. Another third cannot continue at university for the same reason.

That high drop-out rate among Russian-speaking youth perpetuates segregation, Hartman says. "As they can't choose their next school, they have fewer possibilities regarding their workplace. In the end, it also dictates where they live," she said.

Starting at the end of the 1990s, a lack of an organized integration policy focusing on the Estonian language alienated many Russian speakers. It wasn't until around 2010 that this rigid ideology slowly became a two-way street, expanding to culture and the labor market with the aim of bringing people together, according to Hartman. 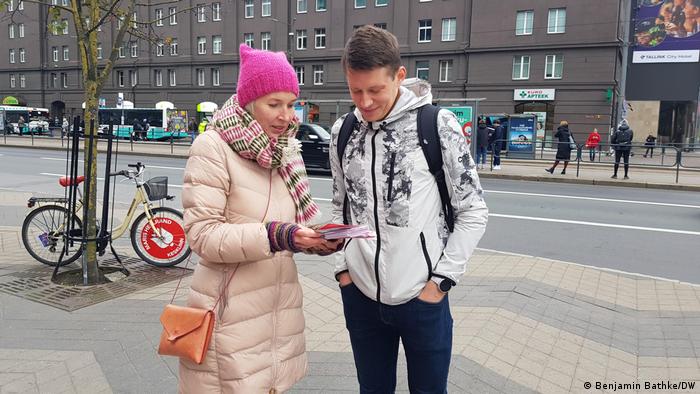 Building a more inclusive Estonian society is what Maris Hellrand has made her central campaign promise. The 51-year-old mother of three is running in the local elections on October 17, for the Estonian Social Democratic Party in Tallinn.

During her journalistic work, she says, she realized that the problem is partially institutionalized through the city funding "segregated extracurricular education" offered by after-school youth clubs. "My children have not one single Russian-speaking friend," she told DW. "They are growing up in a city where half of the population speaks Estonian and the other half Russian. And they don't mix, ever."

The odds of her being able to change things in the city council are slim: The Centre Party has ruled for the past 20 years and is expected to remain in power. It has always been very popular among Russian-speaking voters, all while they were suffering from higher alcoholism, unemployment and drug deaths compared to neighborhoods with more Estonians. Moreover, salaries and the COVID-19 vaccination rate among Russian speakers are lower.

Fellow Social Democratic candidate Artjom Dmitrijev, who is 30 years younger than Hellrand, doesn't find the segregation issue to be quite as problematic. "The borders between the nationalities are quite blurred nowadays," he said. "Things are slowly changing. People are mixing with people from different districts." In Hellrand's view, however, Dmitrijev is an exception to the rule. 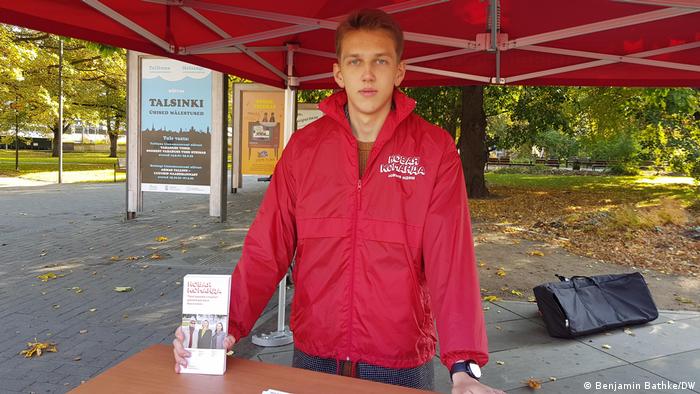 "A lot of it has to do with the fact that Russian-speaking bands are being accepted, which in turn leads to the Russian-speaking kids being accepted in the Estonian scene," he said. "Russian-Estonian musicians and Estonian-Estonian artists working together and creating music and art has definitely helped bridge the cultural divide between the Estonian and Russian parts of the population."

Closed for 19 months, Berlin's famous techno club Berghain reopened a minute before midnight on Saturday for its first club night since the start of the pandemic.

Estonia reaches out to its ethnic Russians at long last

Estonia's large Russian-speaking minority has long felt marginalized by Tallinn politicians, but as the country celebrates its centenary, change appears to be afoot. Isabelle de Pommereau reports from Narva.