Leo Pröstler heads an investment fund that has set up a reforestation project in Costa Rica with tropical wood. He tells Global Ideas why the model makes good business sense as well as helps restore the environment. 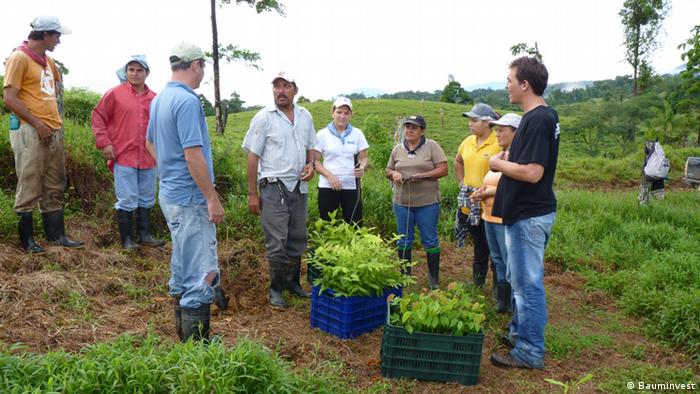 German businessman Leo Pröstler set up the company BaumInvest (TreeInvest) to focus on alternative cultivation methods as well as social initiatives and innovative approaches. The local workers on his farms in Costa Rica are paid fair wages and guaranteed long-term employment.

BaumInvest has also invested in mixed forestry and agroforestry on its tree farms. In other words, farmers are allowed to plant their own crops - ginger, pineapples and yuca, for example - on the land between the trees. There is even a small pig farm with some 50 animals, as well as some 500 free-range chickens. The hope is that the chickens can help free up some of the undergrowth in the forest. Each week, one pig is slaughtered and divided up among the farmers. Along with the vegetables they grow on the land, they are able to provide enough food for their families, and they can even earn extra income by selling some of the products they grow. The hope is that the wood from the tree farms can even be used to build homes for the workers some day.

Global Ideas: Mr. Pröstler, you have an impressive resumé: you studied engineering, you sold steel mills, you headed up the Institute for Applied Ecology in Freiburg and, in 1987 you founded Waschbär Umweltversand, a mail-order company specializing in eco-friendly goods. After that you created BaumInvest. How did that come about? 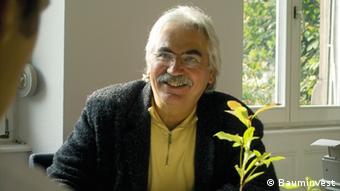 Leo Pröstler: I first came up with the idea in 1994, when I was still running Waschbär. With the catalogues we produced at Waschbär GmbH, we were consuming massive amounts of paper, amounting to several truck loads every year. I wanted to compensate for that ecologically. But I decided not to do so through donations - instead, I came up with an environmental project in Costa Rica based on a loan system, with the seedlings as interest. That’s how it all began. Later, I founded Querdenker GmbH, a consultancy for project development and management in sustainable investment, and with that I launched the first BaumInvest fund.

Individuals or companies invest money for a 24-year time period, and we use those funds to purchase former pastures and coconut plantations in northern Costa Rica and reforest them. We plant teak, mahagony, roble coral, cebo, almendro and other indigenous tree species. When they mature, we sell their wood and return investors’ money with yield.

But you’re talking about tree farms and native timber - how can you sell that to investors as eco-friendly?

I’ve always understood sustainability to mean that everything stays as it is. But we actually improve the situation on the land that we buy up. The soil on these plots is often depleted because it’s been over-farmed, and the creeks are in bad shape due to the use of pesticides and chemical fertilizers. What we do has little to do with what you see on typical tree plantations: We plant a mix of native species and improve the soil and groundwater. I call this principle ‘plustainability’ because it’s one step better than sustainability.

But you’re still selling native tropical timber at the end of the day. That sets off all of my ecological red flags! 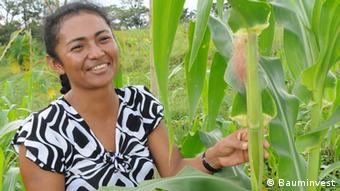 From the field to the plate: the farmers plant crops between the rows of trees

Consumers always want things to be black and white, but it’s often more complicated than that. I could plant pineapples in Central America that erode the soil quality. Or I can plant a tree. Nothing can absorb and store CO2 as well as a tree, and there’s no better place to do so than in the tropics, where plants grow extremely fast. As long as the wood isn’t being burned later on, it’s permanently locked in the CO2. And that is always a better solution than carbon capture storage . Trees are a natural alternative.

So how do you explain the sustainable side of tropical wood furniture to potential customers?

We have had problems with that. For example, our Querdenker GmbH business is based in Freiburg so I wanted to present the city with a gift by replacing an old boardwalk with teak wood. But it didn’t work because of the city’s long-standing resolution not to use tropical woods. But you have to be able to rethink those attitudes these days! Reforestation is essential for our climate, everyone agrees on that. But you have to be able to pay for it somehow, and turning it into an investment is one possibility. We came up guidelines to explain how we make sure the process is implemented in an ecological, economical and socially beneficial way. Of course, you have to be ready to pay a fair price for the end product. Sure, you can buy teak wood chairs for 40 euros, but there’s no way they can be cleanly produced for that price.

What about the investors? Are they drawn in by the 6.3 percent return on their investment? Or because they believe in the cause? Isn’t there a bit of greenwashing for the soul going on here?

The investors place their money with us because they trust us. Almost all of them are driven to invest because of ecological or social motives. There are many who want to show their children that money can change things, but that it takes patience: This project will run for generations. My son Stefan is coordinating the reforestation projects in Costa Rica and has made that his goal for the next 30 years. He now has a son too who is growing up there.

You also offer your investors the chance to take a look at the project themselves? 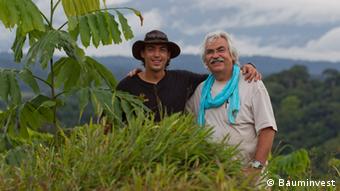 Leo Pröstler and his son Stefan: BaumInvest is a long-term project the they hope will continue for generations

Yes, we organize investor trips. Our investors should see the tree farms with their own eyes. That always leads to very interesting and critical discussions about our project that often go on for hours. It’s tough, but it’s part of the business. We also get a lot of ideas and suggestions from that process. On one of our very first investor trips, for example, there was thunder and lightning as we were driving out to the nursery. One of the investors complained that we were asking too much of him. My son Stefan reminded him that our workers have been doing the very same thing for five years, and that investors ask that ofthem. That sparked a really interesting discussion about the social aspects of the business.

One more question on the return on investment: I get two percent interest on my bank account right now. I’d be pretty skeptical if you promised me six percent….

Well, there are plenty of other forest investment projects that promise a return of nine to twelve percent. These numbers are based on the estimated increase in wood prices, among other things. We had to provide the Federal Financial Supervisory Authority, or BaFin, with a very specific calculation for the coming 24 years. Other timber funds are unrealistic with their predictions of how wood prices will climb, forecasting six percent - but we stuck to just two percent. That might be unrealistic too, and in that case we’ll have to send our wood to Vietnam where it can be processed cheaply - even if I want to avoid that scenario. But maybe it’ll be different, maybe there will be legislation at some point prohibiting people from cutting down wild teak. Then we’d be in a unique position with our plantations.

All those uncertainties make the whole thing risky for investors but they are aware of that. All in all, though, you have to see that we have come a long, long way from when we first started out at BaumInvest planting monocultures. I’m not a specialist in forestry, and maybe that’s why it was easier for me to do things with our tree nurseries that other people called impossible. The same goes for the local farmers - in the beginning, they thought we were crazy and didn’t take us seriously. Now they say it rains more, thanks to the trees we planted.