Can Berlin Save German Pop?

Many in Germany's troubled music industry hope moving the trade fair Popkomm from Cologne to Berlin this year will help the sector redefine itself in an age of plummeting CD sales and surging digital downloads. 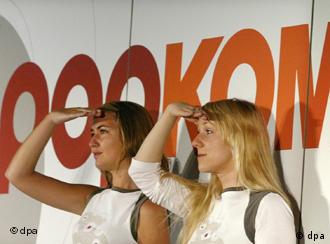 Looking for the answers to the industry's woes

Long suffering from sinking revenues and under threat from emerging technologies such as mp3 and Internet file-swapping networks, there are several issues plaguing the music business during the 16th annual Popkomm. But the move to Berlin has fused what is often billed as the world's biggest music trade fair with new life.

"It's not simply moving from one city to another, but rather a real fresh start," said Popkomm's general manager Ralf Kleinhenz. Despite Cologne's role as an important media center in Germany, the number of visitors to the fair had dropped dramatically in recent years.

Opening with a big concert on Tuesday night, organizers hope Berlin -- which has been anointed Germany's music capital -- will increase Popkomm's international profile. There will be 661 exhibitors at the three-day trade fair from 41 different countries. Along with an industry conference, there will be 400 hours of live music at concerts and club events open to the general public.

During the week, German acts like rappers Die Fantastischen Vier and rockers Sportfreunde Stiller will perform alongside international artists including world-renowned techno DJs and veteran gangsta rapper Ice-T, who has a new group called The Machine. But as Berliners enjoy a few days of top-shelf music, industry insiders will be discussing the still uncertain future of the music business.

The future is digital

Topping the agenda is how to deal with the rapidly evolving nature of music. As fewer people buy CDs and move their music collections to their home computers, the industry is still grappling with piracy and copyright issues for digital formats like mp3s. Some estimates have put the drop in sales for the German music sector at around 40 percent since 1997. Most in the industry blame Internet file-sharing networks that were modeled on Napster.

"What's changing at the moment is how we deal with music," Kleinhenz said. "And that raises questions not only of an economic nature, but also cultural and societal questions."

In Germany, one of the top current questions is how best to support local artists. Some are calling for a radio quota for German musicians modeled on France's system. There, at least 40 percent of all radio airtime is reserved for French acts. The initiative has gained the support of some German politicians, including Green Party parliamentarian Antje Vollmer.

"We owe it to our cultural identity," Vollmer said, according to DPA news agency. "It has nothing to do with being overly German. Other countries naturally take care of their own artists." Vollmer has called for an open parliamentary debate on the matter on Wednesday.

Not waiting for help

Many musicians agree more needs to be done to promote German acts, but they aren't waiting for the government or industry to help them out.

Eike Herwig, the drummer for the punk rock band the Donots, said his group makes a special effort to promote up-and-coming bands. Besides setting up a special section highlighting new groups on their Web site, the Donots are also giving them opening spots on their latest tour. 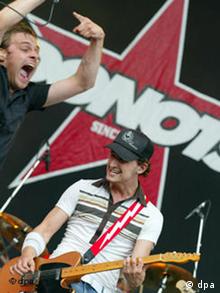 Ingo and Alex from the Donots at the Hurricane Open Air Festival. (Eike is behind them.)

"I think it's important to give German musicians more attention," Herwig told DW-WORLD. "A lot of the time on German radio the focus is on bands from America and England."

Tim Renner from record label Motor Music backs the idea of supporting local acts, but is leery of a legally mandated quota. During Popkomm the label's new radio station MotorFM will broadcast only German bands and musicians like Canadian electro-trash queen Peaches, who have a connection to Germany.

Renner used to head up the German division of Universal Music, but he and the company parted ways amid disagreement over the direction the label was heading. Whereas Renner always thought supporting local German musicians would be the best way to approach the domestic market, the head office of the company wanted to focus more on major international acts that could be sold globally. 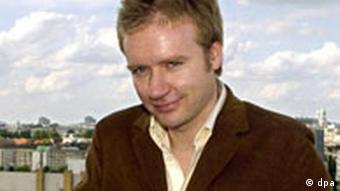 "I get mixed feelings when I hear the word quota," Renner told DW-WORLD. "They'll tell you there's not enough good stuff out there. That's not true. They need to promote the cultural diversity, but any quota will mean they've failed to find a radio concept."

He said if MotorFM gets a permanent frequency to broadcast in Berlin the station will continue to support local artists, but it will concentrate on simply playing good music regardless of its origin.

Renner is also hoping to pioneer new ways to make new digital technologies a boon instead of a bane for the industry. He said the station would aim to make every song played available to download legally. Besides an Internet portal along the lines of the Apple iTunes Music Store, he said he hoped to have a totally mobile business model, including being able to send a SMS text message from your phone to purchase the song being played on your car stereo.

"The radio stations could be the retailers of tomorrow," he said. "Radio is the most mobile medium there is."

MP3 Inventor Wants a Chat with His Stereo

Bought the latest Coldplay album and wonder what else you might like? Four German companies are competing to offer the best online music-recommendation software. In the mix: the inventor of the MP3. (Sept. 28, 2004)

English-language music dominates the airwaves in Germany. But some are calling for a radio quota that would force stations to play more German songs, saying it would help homegrown artists and the local music industry. (Dec. 9, 2004)

The world's largest music conference kicked off on Thursday with the announcement of the establishment of a regulated Internet exchange and a renewed commitment to the promotion of German music. (Aug. 14, 2003)

With a link to MotorFM