Campaign calls on tourists to boycott Buddha souvenirs | Asia| An in-depth look at news from across the continent | DW | 20.11.2013

A campaign group in Thailand is calling on tourists to stop buying tacky memorabilia bearing Buddha's image. They argue such blatant commercialization of their religion is disrespectful. 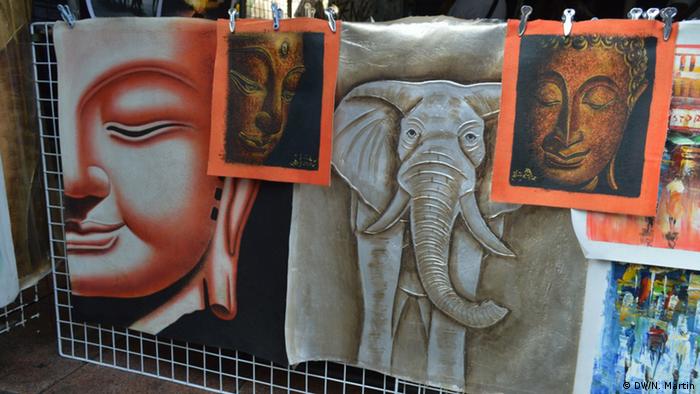 Thailand's many markets are full to the brim with stalls selling Buddha souvenirs. Statues come in all shapes and sizes, paintings and photos display the Buddha in different postures, while T-shirts and jeans are often printed or embroidered with his image.

Although Thai people have a strong affection for their deity, some are very willing to make a quick buck from Buddha's popularity. But now a campaign is building to restrict how Buddha's image is used. A group called "Knowing Buddha," has bought ads on billboards calling on tourists – and presumably locals – to show more respect.

The ads appeal to holidaymakers not to buy what the campaigners consider to be vulgar memorabilia such as Buddha plant pots or alarm clocks. They argue such blatant commercialism would never be tolerated by Islam or Christianity, so why should Buddhism?

"Buddha's image has been used disrespectfully for too many years." said Ms. Acharawadee Wongsakon, president of the Knowing Buddha Organization. "Some people might do it without knowing what is appropriate, but many do it intentionally, so we decided to speak out." 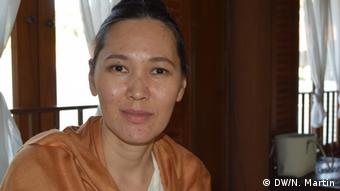 According to Wongsakon, Buddha's image has been used disrespectfully for too many years

Wongsakon told DW she noticed that Buddha became a marketable commodity more than 15 years ago when the Buddha Bar first opened in Paris, before spreading to more than a dozen cities. The concept seems to have spawned a new industry in Thailand, she explained.

"Since the Buddha Bar opened, people just copy it. They think that it's ok that Buddha becomes a piece of furniture or a decorative item. No one can stop it and tell them it's wrong," she said.

Earlier this year, a small hotel in France used Buddha's image on a toilet seat, the final straw for many devout followers.

The members of "Knowing Buddha" estimate that there are at least 100,000 examples of symbols insulting their religion and Buddha. The organization claims it's up to consumers to say 'no'.

Some tourists told DW they thought the commercialization of Buddha's image had gone too far, while others said clear rules were needed. "I'm surprised they haven't acted until now. I come to Thailand regularly and I'm appalled at the awful Buddha souvenirs. I wouldn't buy any of them," said American tourist Mark Redmond.

Local authorities and American Evangelicals are currently working on reduction of sex trafficking in Thailand. But, some sex industry workers say they haven't been trafficked, and are calling for a stop to the measures. (21.10.2013)

While sex between men is still illegal among most of its neighboring countries, Thailand - the region's most gay-friendly country - could be about to allow same-sex marriage. (26.08.2013)

Fears of violence in Thailand over amnesty bill

Thousands of protesters in Thailand are trying to stop the passage of a government bill designed to grant amnesty to political offenders. They fear this could pave the way for the return of former PM Thaksin Shinawatra. (07.08.2013)

British tourist Carole Embling said:" There are so many Buddha items on display in Thailand that you really wouldn't know what is respectful and what is not. Obviously having Buddha etched into the backside of a pair of jeans is probably not very appropriate, but there are some very interesting collectibles that are in good taste."

While Wongsakon understands that for many people Buddha's image represents "peacefulness and harmony," she also points out that they have no right to keep statues or furniture in their homes. "Buddha is one of the greatest prophets in the world. People need to show more respect," she adds.

Photos of the backs of foreign tourists adorn the walls of the EAK Tattoo parlour on Khao San Road in Bangkok. On the images you can see that almost every centimetre is covered by a Buddha tattoo of their choice.

The shop is popular with tourists and foreign residents who clearly want a piece of Thailand that will stay with them for a lifetime. A multi-colored tattoo of Lord Buddha will cost you about 45,000 Thai baht, about USD1,400. Store manager Suksiri Boonkuakua told DW there are already strict rules about where a Buddha image can be tattooed on the body.

"We will only put it above the waist. Lower than the waist is not allowed. Above the waist is very good karma." Some foreigners pick a Buddha tattoo not just because it is fashionable, but because of a growing affinity with the religion, she said. "I think many have spent a long time in Thailand and understand Buddhism better. They do it to help change their mindset."

As well as asking tourists to boycott stalls selling tacky merchandise, "Knowing Buddha" has called for greater support from the Thai government. Campaigners want tough new laws and a task-force assigned to root out those companies that manufacture "disrespectful" souvenirs. They think the foreign ministry should pressure other countries to follow their example. 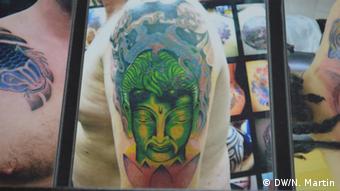 But instead of taking legal action against certain manufacturers, Wongsakon prefers to take the middle way. "We don't want to create confrontation. But if they don't co-operate then we will call for a boycott among our members. If two million people boycott the products of company, then I think our voice will be heard."

But some commentators believe the mai pen rai ('don't worry about it') attitude of most Thais, has helped Buddhism become one of the fastest growing religions in the world.