Polls have closed in the central African country after elections were dominated by a boycott from the main opposition party and separatist violence. President Paul Biya is expected to maintain his tight grip on power. 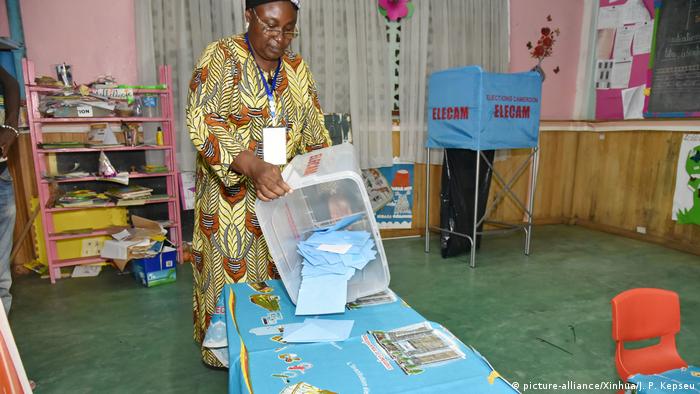 Polls closed in Cameroon on Sunday in an election overshadowed by a partial opposition boycott and separatist violence that displaced hundreds of thousands in the region.

The elections were the first in seven years after two postponements. An opposition boycott means that the rule of President Paul Biya is unlikely to be brought to an end.

Biya, one of the oldest and longest-serving leaders in the world, has held a tight grip on power in the central African country for 37 years.

Large numbers of police and security forces were deployed during the day but no violence was reported in the cities.

"Voting operations were completed across the country in 26,336 polling stations in calm, order and discipline," Erik Essousse, director general of the electoral commission, told reporters.

Why was there a boycott?

The main opposition party, the Movement for the Rebirth of Cameroon (MRC), refused to field a single candidate. The boycott all but guarantees a majority win for Biya's People's Democratic Movement.

Opposition separatists want an independent state for Cameroon's often-marginalized Anglophone population. The conflict in Anglophone regions has been marred by violent squabbles.

The other large opposition party, the Social Democratic Front, did not take part in the boycott, leading to criticism by the MRC.

Political analyst Stephane Akoa told DW ahead of the election that he was surprised by the calm atmosphere in Yaounde, Cameroon's capital.

"When I look around, I see people on cafe terraces eating and drinking — but no posters, no campaigners with honking cars. It's all very quiet," he said on Saturday.

Official results are expected in the coming days.

Cameroon's Anglophone regions could get 'special status,' but experts are skeptical that this will end the crisis. They argue that there is only one lasting solution to Cameroon's ongoing violent conflict – federation. (23.12.2019)