Water cannons have been used to bring the angry protest by garment workers to an end. Thousands of people went on strike after they had been promised an 18 euro pay rise and only received half. 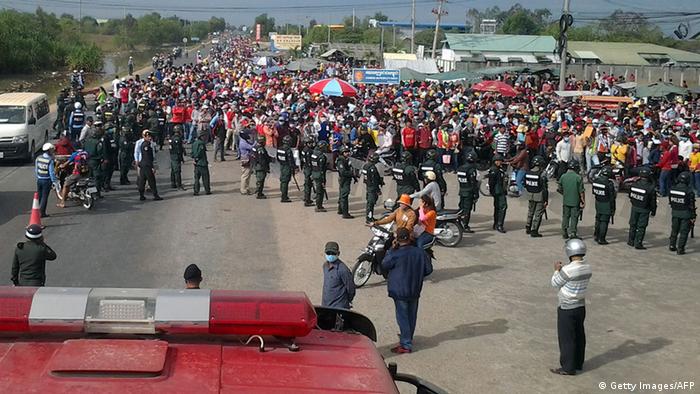 Police, under orders to bring an almost week-long strike by Cambodian garment workers to an end, used water cannon to break up their protests on Monday.

The police action - which took place at a special economic zone in Bavet, close to the Vietnamese border - followed a walk-out by workers at two factories that have stopped work since December 16. As many as 8,000 people have been involved in the protests and strike.

Workers are angry that a new minimum wage of $140, which was agreed in October, falls far short of the sum that unions had demanded. Several protesters said companies had delivered just 50 percent of a promised pay rise.

The industry has seen several similar strikes in rows over pay, forced overtime and complaints of anti-union practices by factories. Last year, dozens of Cambodians were put on trial when similar protests got out of hand.

Ministers have warned that the ongoing action threatens the country's multi-billion dollar garment industry and the governor of Bavet, who led the crackdown, insisted the situation had to be brought under control after days of snowballing protests.

"We have tolerated them for a long time already. Our forces are only protecting the factory, its investors and the safety of the workers," he said.

One union leader, Kem Chamroeun from the Union of Movement of Workers, said the strikes had been wildcat and not authorized by the workers' collective. But he predicted that further protests would break out.

Amid a competitive garment manufacturing industry in Asia, the Cambodian government says it has attempted to meet workers' demands while keeping the sector competitive.

Neighboring Vietnam is seeing a huge investment in footwear and textiles, due to free trade agreements with major Western markets, leaving Cambodia to play catch-up. But Vietnam has also seen similar strikes over low wages.