Vietnamese workers extract concessions in unprecedented strike | Asia| An in-depth look at news from across the continent | DW | 02.04.2015

Workers at a major Vietnamese footwear factory have ended on a week-long strike after the government announced changes to a social insurance law. DW examines the issue of retirement payouts in the Southeast Asian nation. 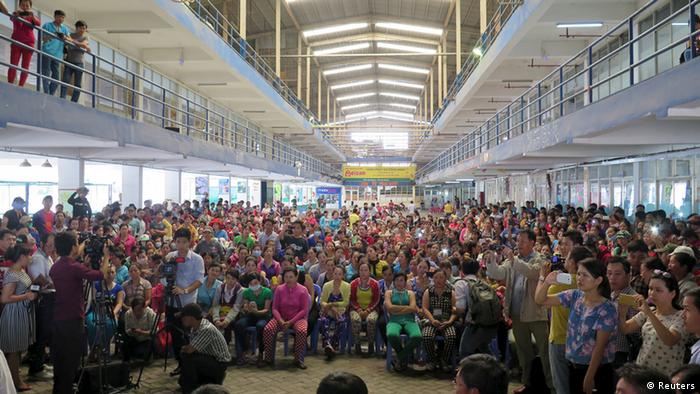 In a rare challenge to the communist government, an estimated 80,000 workers at Pou Yuen Vietnam, a footwear factory in the suburbs of southern Ho Chi Minh City, massed peacefully inside and outside the industrial facility for five days - starting March 27 - in protest over a new social insurance law, which is set to go into effect in 2016.

The current law allows employees to opt to receive a lump-sum payment which is calculated at about 150 percent of the monthly salary of each working year - an option workers say they need to pay for living expenses, especially while seeking new jobs.

But the government now wants to end that, saying the insurance fund contributions should move from job to job. According to the new law, workers have to accumulate 20 years of social security payments to be eligible for a retirement payout after having reached the retirement age of 55 for women and 60 for men. If they cannot accumulate the 20 years, they will still get the lump-sum, but only after having reached the retirement age.

However, footwear factory workers don't want the lump-sum option to be taken away in the new law. "Many of them said it is not likely they will find a new job easily after quitting their old jobs, and would prefer to use the lump sum as a safety net rather than waiting to reenter the pension system once they have found new employment," said Phuong Nguyen, a Southeast Asia expert at the Washington-based Center for Strategic & International Studies (CSIS). 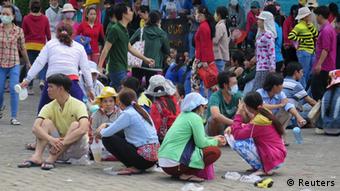 Hanoi argues the new law encourages workers to stay in the pension system for longer, was designed to protect people through stable monthly payments during retirement and that the workers who went on strike simply don't fully understand the benefits. But the changes to the law have also aroused fears that the whole insurance system is insolvent.

This is why thousands of workers stopped working as soon as the government plans were communicated by management. "It was actually not a strike in the real sense of the word, but more of a work stoppage, but the effect was the same of course, and the government feared that these strikes may spread," said Erwin Schweisshelm, head of the Hanoi office of the Friedrich Ebert Foundation.

Independent Southeast Asia analyst Zachary Abuza has a similar view. He told DW that the main concern for Hanoi was to have to deal with protests similar to the anti-China demonstrations last May and June that quickly turned violent. "Political and labor stability are one of the country's top selling points to investors," he said, adding that continued unrest could lead to foreign firms pulling out their investments.

As a result, the government changed its position on Wednesday, April 1, proposing changes to the law to make it "suitable to the situation" and meet the workers' demands.

The government said in a statement it will ask the National Assembly to amend the law that would allow laborers to get their retirement payouts at one time or when they retire, if they choose so - a move described by analysts as rare given Vietnamese authorities' reputation of showing little tolerance for dissent. The country has been tightly controlled by one communist party for decades.

Analysts believe that the core of the protests is Vietnam's dilemma over its pension scheme. "If the old system of lump-sum payments prevails, it will be nearly impossible to build up a sustainable social security system. But at the same time, these young workers have valid reasons to pick the lump sum instead of a retirement pay in the far future," said Schweisshelm.

"Most of these workers in garment or electronic companies working up to 60 hours per week will, in their view, not be able to accumulate more than 20 years of payment, but rather will return to their villages once they have acquired enough funds to modernize their farms and open up a business," the expert explained. Furthermore, they probably do not trust the Social Security Fund to really make their payments in the far future, he added.

While working conditions have improved in recent years, the minimum wage in the country as of 2015 is about $146 a month, which is estimated to cover only 70 percent of basic living costs, according to a survey that polled workers across 12 different cities in Vietnam. At the same time, living costs in urban areas have a skyrocketed in recent years.

On top of this, the government was very cautious last year about raising the minimum wage any higher due to fear of Vietnam losing its attractiveness to foreign investors. Exports from foreign-invested businesses last year reached $101.6 billion, or 68 percent of Vietnam's total exports. "Put these factors together, and it's evident why the workers have come out en masse to strike over the new social insurance law," said Nguyen.

Vietnam is among the world's top three garment exporters. Almost every major footwear company manufactures in the Southeast Asian nation which is slowly positioning itself as an Asian manufacturing powerhouse.

Garment and footwear exports from Vietnam totaled $31 billion, or about 16 percent of Vietnam's Gross Domestic Product in 2014. The sector employs over 2.5 million people, with approximately 6000 companies, many of which are foreign-invested enterprises such as Pou Yuen, a subsidiary of the Taiwan-based Pou Chen Group. 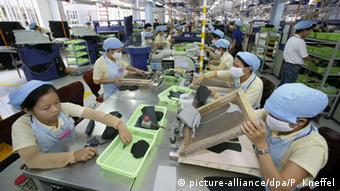 Vietnam is slowly positioning itself as a manufacturing powerhouse in Asia

The high economic stakes offer perhaps a clue as to why the Vietnamese authorities have tolerated the latest labor unrest. "With TPP negotiations nearing completion, and ahead of US congressional vote, they cannot afford to crack down. They have to exercise restraint," said Abuza.

However, the analyst remains concerned. Abuza argues that even if the government can reach a deal and defuse the situation, they will, after an interregnum, likely harass or detain the strike leaders.

"This is a communist regime, so the exploitation of workers by profit maximizing foreign companies is a very sensitive issue. They have to appear like they are concerned for workers, while at the same time stopping the spread of any truly independent organizations, which the party does view as a real threat."