Trial has begun in Cambodia for 23 people charged with violence and property damage during a January protest by garment workers in which police shot at least four dead. Rights groups have criticized the prosecutions. 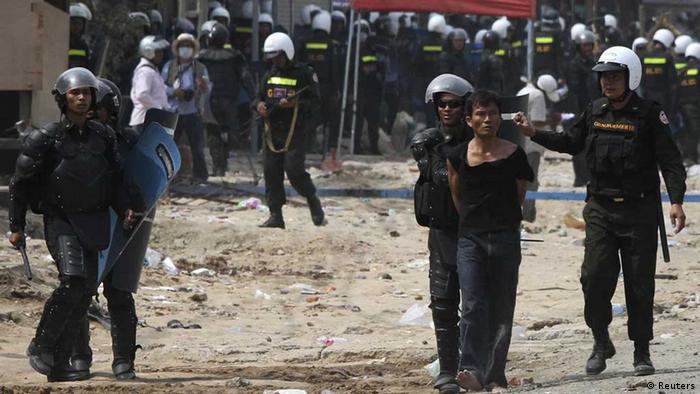 Twenty-three Cambodian activists and workers arrested during a deadly crackdown on a garment industry strike in January went on trial Friday despite international appeals for their release. During the protests in January (pictured), police opened fire on textile workers calling for a monthly minimum wage of $160 (115 euros), killing at least four civilians.

"The Cambodian government must drop all charges on the 23 garment workers and human rights defenders arrested during the 2-3 January brutal suppression of demonstrators in Phnom Penh," the Paris-based International Federation for Human Rights wrote in a statement this week.

According to rights groups, the 23 defendants - most detained for months now without bail - could face up to five years' imprisonment on charges including committing intentional violence. On Friday, Kong Athit, of the Cambodian Labour Confederation, denounced what he described as "politically-motivated charges" against the defendants.

"The workers did not hurt anybody," Kong told the news agency AFP as the accused appeared in two courtrooms filled with rights activists. "They were just protesting for a wage to survive on," he added.

The International Trade Union Confederation has launched a campaign to "Free the 23," urging workers to lobby Cambodian embassies around the world. In Phnom Penh on Friday, hundreds of supporters gathered holding signs demanding the release of the prisoners and briefly scuffled with security forces who had blocked off roads around the court.

"This trial only fuels a sense of injustice among Cambodia's workers," said Thun Saray, president of the local rights group Adhoc.