Cambodia garment worker dreams of better future | Asia| An in-depth look at news from across the continent | DW | 12.02.2014

Garment factories are the backbone of Cambodia's economy, yet the people working the sewing machines make just a few dollars a day. Chem Chan is one of them, who despite hardship holds out hope for a better life. 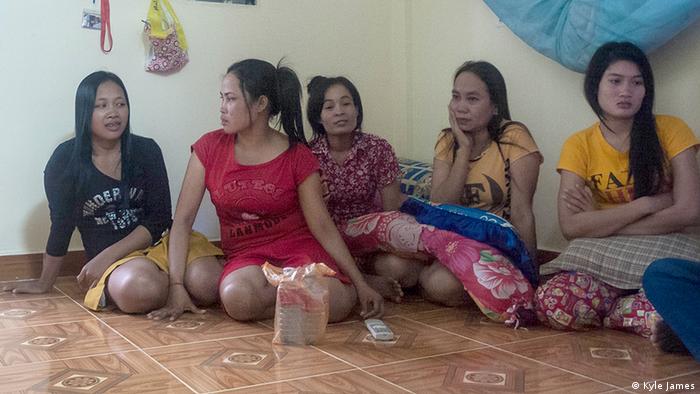 On Sunday, the Prek Tea traditional market near Phnom Penh's airport is alive with the sounds of shouting vendors, TVs in cafés and the busy cleavers of fruit sellers. Chem Chan is in the middle of all this controlled chaos, shopping and running errands. Sunday is the only day she can take care of practical matters. During the other six days of the week, the 25-year-old is sitting behind a sewing machine in one of the many garment factories in the area. Her days start when she gets up at 5 a.m. and often end when she leaves the factory at 8 or 10 p.m.

"Then I come home, eat food left over from lunch, and go to bed," she says. "Then I get up again at five the next morning."

This exhausting regimen is a reality for the majority of Cambodia's approximately 600,000 garment workers. Most of them are young women from poor, rural families who have come to the factories where they can earn more money than they could in their home villages. Still, sewing clothes for international brands like H&M and Gap earns them only around $3.33 a day, unless they work four to six hours of overtime after each shift. Then if they're lucky, they might make around $125 (around 92 euros) a month. 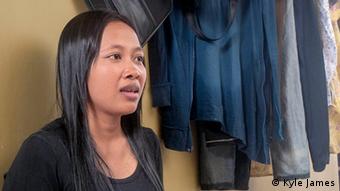 Chem Chan: 'I told my sister never to come here'

But for Chan, this kind of work allows her to send a little money, maybe $20 a month, to her family in a remote village in Cambodia's Battambang province, near the Thai border. She left when she was 18 to come to the capital to work. Her mother scarcely ekes out a living by farming and her father is disabled and cannot work. She has nine siblings, most of whom are married. The money she sends home is crucial for her parents and young brother and sister. So she soldiers on, despite working conditions that she describes as "nightmarish."

"The air is bad, the toilets are dirty, the machines are so loud, and you have to breathe all the stuff coming off the cloth," she says." I can't relax and my head always aches. If I could, I would find another kind of job, but I can't. I don't have a lot of education."

Chan shares a small room in a dormitory for garment factory workers near the traditional market. The room is small, no more than 12 square meters. Together, the women pay around $55 a month for it, including electricity and water. The only furnishings are two small wicker shelves. Two hotplates, pots and bags of rice in one corner serve as the kitchen. In another corner are piled the blankets that the women sleep on at night. There is a small, simple bathroom at the back, an improvement over where Chan used to live, she says. 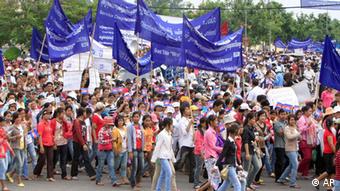 Factory workers have been protesting for years against their working conditions

The garment industry is Cambodia's most important economic engine, with apparel exports earning the country $5.52 billion in 2013. That's a 20 percent rise over 2012, according to the Cambodian Commerce Ministry. Exports to the US totaled $2.12 billion last year and those to the EU, $2 billion. Investors see Cambodia as an ideal place to make garments given its low wage costs and huge supply of young workers, many from rural areas where jobs outside of subsistence-level farming are scarce.

But trade unions and garment workers themselves are beginning to demand a change to the status quo, calling more of the factories' profits to go to those who actually make the clothes. While there have been some substantial wage increases in the sector over the past few years, many say pay is still far below what might be considered a living wage. The Asia Floor Wage Alliance, made up of trade unions and labor rights activists, estimates that a living wage for Cambodian garment workers should be $283 per month.

On December 24, tens of thousands of garment workers walked away from their sewing machines and hit the streets. They were calling for the government to raise the industry minimum wage to $160. Officials balked, but then agreed to increase the base salary to $100 a month starting on February 1. Still, workers were not satisfied and protests went on for 10 days until clashes between demonstrators and security forces became deadly on January 3.

Police opened fire on protesters, killing at least four and injuring dozens more. The government then imposed a ban on future protests indefinitely.

"I was shocked when I saw how security forces cracked down on our strikes," says Chan, who had taken part in the walkout. "I saw how they used batons to hit protesters on the head. I saw people bleeding. It was so cruel. But I felt I had to participate, even though I was scared. Otherwise, nothing's going to change." 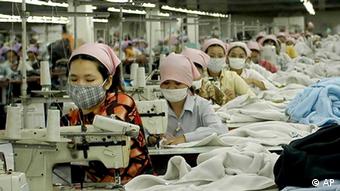 Trade unions have said they will call for a nationwide strike in the next few weeks to demand more money and better conditions for workers. Factory owners counter that if they raise wages much more, production costs will skyrocket and they will be forced to move their factories to countries with even lower labor costs than Cambodia. That could put hundreds of thousands of people, including Chan, out of work. It could also cripple the Cambodian economy.

Despite that, Chan says she'll continue to join the labor actions, despite the potential danger. She says she's not just doing it for herself, but for the generations to follow.

Hopes for a better life

Chan's dreams for the future are not uncommon. She'd like to have a family and children. And she'd like to have the money to send them to school so they can get good jobs and not have to work in a garment factory. While she is not ashamed of what she does, she doesn't want her future children or even her 13-year-old sister following in her footsteps.

In fact, she makes sure that some of the money she sends back home goes toward her younger sister's education.