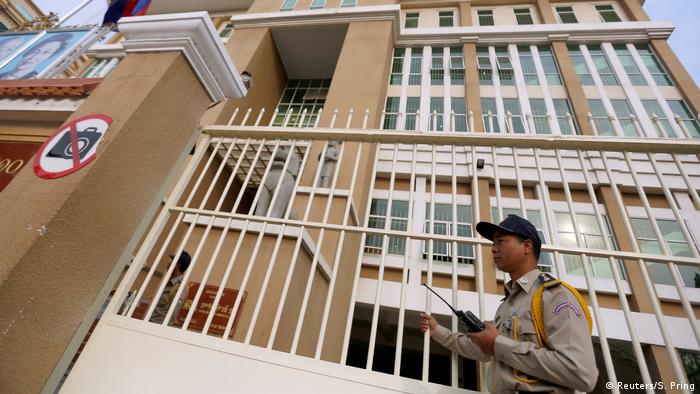 Cambodia's use of royal defamation laws, more commonly used in Thailand, is a relatively new phenomenon. The legislation was only enacted in 2018.

Whom did Cambodia charge with royal insults?

Authorities arrested Sun Ratha, Ly Chandaravuth and Yim Leanghy, of the advocacy group Mother Nature, on Wednesday after they documented the draining of waste into Phnom Penh's Tonle Sap river, the group said.

Over the weekend, they were "charged with conspiracy to plot and for insulting the king," Plang Sophal, a spokesman for Phnom Penh Municipal Court, told AFP in a text message Monday.

"The evidence collected by the police was an insult to the king," he told Reuters, without elaborating.

If found guilty, the four face up to 10 years in prison for conspiracy and up to five for insulting the monarchy.

The court also charged in absentia Mother Nature's co-founder, Alejandro Gonzalez-Davidson, a Spanish activist deported from Cambodia in 2015 after criticizing the government's plans for a dam.

US reactions to the charges

The US ambassador to Cambodia, W. Patrick Murphy, said he was "very troubled" to hear about the arrests.

"Documenting pollution is a public service, not terrorism," Murphy said on Twitter. "We urge authorities to be responsive to its citizens, not to silence them," he added.

The US embassy last week had slammed the "worsening" situation in Cambodia, announcing that it was redirecting millions in funds from government entities to local organizations.

How Cambodia has 'targeted' Mother Nature

Last month, a court sentenced three Mother Nature activists to between 18 and 20 months in prison for organizing a march to protest filling a massive lake in the capital with sand.

"This marks an escalation with the outrageous charges of 'plotting,'" Naly said.