The governor of Cambodia's Preah Sihanouk province has stepped down after a seven-floor building collapsed. Cambodian Prime Minister Hun Sen has also fired a top safety official for "lack of responsibility." 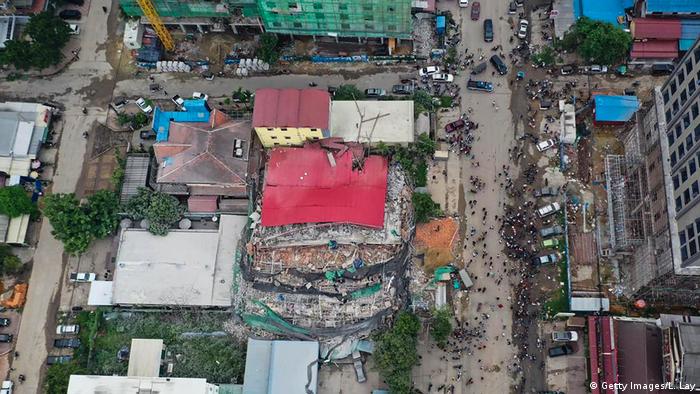 Two days after a building under construction collapsed in Cambodia's Preah Sihanouk province, the nation's Prime Minister Hun Sen has fired a top disaster management official and accepted the resignation of the provincial governor.

In a post on his Facebook page on Monday, Hun Sen said that Nhim Vanda, the deputy director of the National Committee on Disaster Management, had been sacked over a "lack of responsibility and for lying" about the disaster without elaborating.

He also said that Yun Min, governor of the Preah Sihanouk province, had submitted his resignation. High-level resignations over wrongdoing are rare in Cambodia.

Yun Min confirmed his resignation as part of an apology on Facebook, in which he asked forgiveness of citizens, civil servants and the military alike.

A seven-floor building that was under construction collapsed on Saturday in the seaside resort town of Sihanoukville in southern Cambodia.

Preah Sihanouk provincial authorities on Monday said rescue workers had found two survivors and four bodies while digging through the rubble. The known death toll reached 28 on Monday, as authorities said not to expect more survivors.

Sihanoukville has seen a boom of Chinese-owned casinos and hotels, prompting concerns about construction and labor standards. Cambodia is notorious for lax safety laws and poor labor protections.

Hun Sen announced that he was establishing a special committee to oversee the construction of Chinese building projects in the town.

A building collapse in Shanghai claimed several lives after around 20 people were trapped under the rubble. Over 150 rescue workers raced to pull the survivors to safety from the former Mercedes dealership. (16.05.2019)

Large parts of Cambodia have had to endure hours of daily power outages after the country's main provider said it was unable to meet demand due to dry weather. Small businesses are suffering the most. (11.04.2019)