A building collapse in Shanghai claimed several lives after around 20 people were trapped under the rubble. Over 150 rescue workers raced to pull the survivors to safety from the former Mercedes dealership. 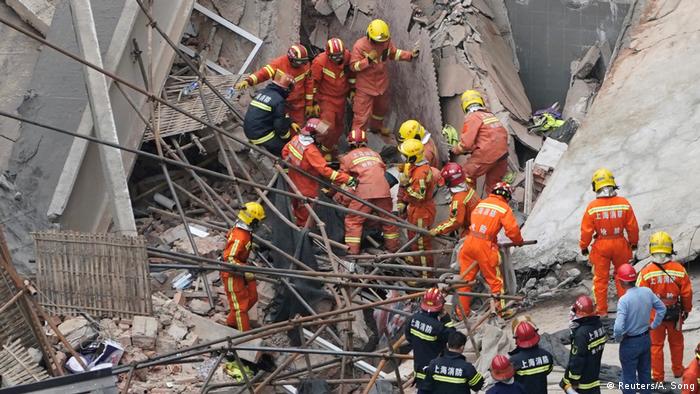 At least five people lost their lives in downtown Shanghai after the roof of a large building caved in on Thursday. Another 14 were rescued in a massive rescue effort which involved over 150 emergency responders and 24 vehicles.

The low-rise building in the residential Changning district had been used as a Mercedes-Benz dealership. The building was undergoing renovation when it collapsed at around 11:30 a.m. local time. Chinese officials did not say what the cause of the collapse was.

A local resident said she was asleep when her bed suddenly started to shake. She then heard a loud bang.

"I thought it was an explosion at first," the woman told the AFP news agency.

Chinese media reported the building's area was around 3,000 square meteres (32,000 square feet). Images from the scene showed about half of the compound's roof was collapsed. The building was reportedly in the process of redevelopment as a mixed-use arts and innovation site.

The collapse of the Cologne city archives left two people dead and buried thousands of documents - some of which dated from the Middle Ages. Public prosecutors are considering pressing charges. (11.05.2017)

Heavy storms caused a church roof to collapse near Durban, killing 13 and injuring 16 others. Some had been staying at the church overnight when the incident happened. (19.04.2019)