An activist said she was being persecuted for her political opinions as Cambodia tries dozens of opposition members. Human rights groups raised concerns over the fairness of such a trial. 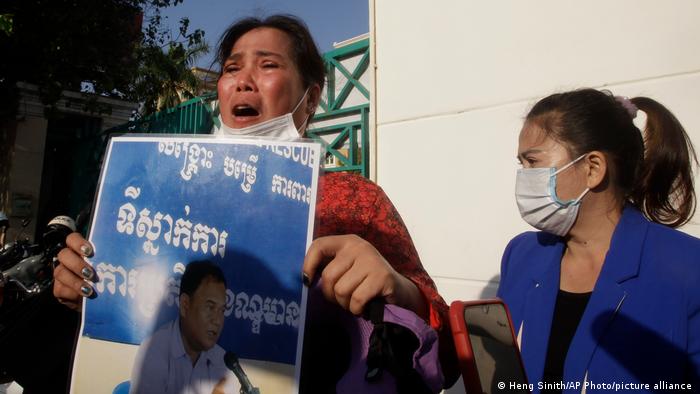 Cambodia resumed Thursday the trial of dozens of opposition members in Phnom Penh, which activists described as a politicized human rights violation.

The defendants are accused of expressing on social media their support for exiled opposition figure Sam Rainsy to return to Cambodia.

One of the defendants, a US-Cambodian human rights activist, said she was being persecuted for her political opinions, condemning Cambodian Prime Minister Hun Sen's crackdown on the opposition.

"Mr. Hun Sen is not the owner of my life. He will not intimidate me with these charges. I will face them, and because they are a sham, they are not real charges," Theary Seng told reporters at the courthouse.

Security forces guarding the courthouse removed families and supporters of defendants, denying their entry to see the accused, a Cambodian activist said on Twitter.

The various charges in the case include incitement to commit a felony, inciting military personnel to disobedience and several counts of criminal attempt.

"Criminal attempt" convictions are punishable by up to 30 years in prison.

Most defendants in the case are affiliated with Rainsy's Cambodia National Rescue Party (CNR). The others are human rights activists.

Rainsy has tried to return home from France since 2019, two years after a court in Cambodia dissolved the CNR.

Amnesty International also raised concerns over the fairness of the trials.

"These mass trials are an affront to international fair trial standards, Cambodia's human rights commitments and the rule of law," an Amnesty International spokesman said.

"This onslaught of cases is the culmination of a relentless campaign of persecution against Cambodia's political opposition and other dissenting voices," he added.

Critics said Sen has maintained his power for more than three decades by oppressing activists and opposition.