A gunman went on a rampage in a small US town, killing four people and injuring at least 10 others. Police say a lockdown at a nearby school prevented an even worse outcome. 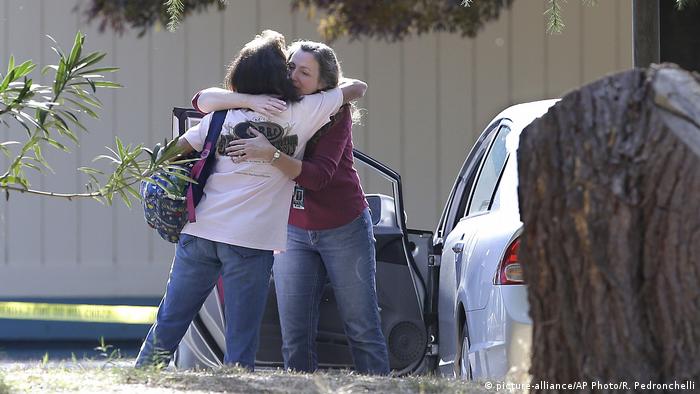 A lone gunman opened fire on members of the public after shooting dead a female neighbor in a small town in the US state of California on Tuesday morning. The shooting began at 8 a.m. local time (1600 UTC) at a home in Rancho Tehama Reserve, 210 kilometers (130 miles) northeast of Sacramento.

Four people were killed and nearly a dozen others were wounded, including several children, police said.

Authorities said one of the victims was a neighbor — a woman the gunman was accused of assaulting earlier in the year. 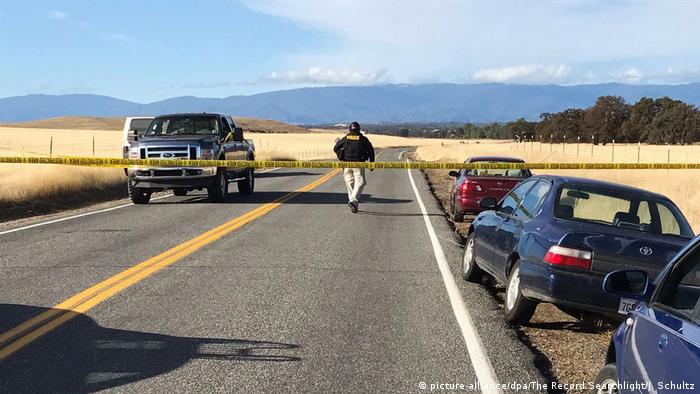 The shooter stole at least two cars during his rampage

The assailant, who has not been identified, then moved onto six other spots, including an elementary school in a nearby town.

Read more:  8 facts about gun control in the US

Authorities said the shooter tried to get into classrooms at the Rancho Tehama School that staff had initiated a lockdown, which prevented more lives being lost.

One parent described being in the school when bullets smashed through the window and hit a student. Coy Ferreira told KRCR that students hid under desks as shots rang out for what seemed like nearly half an hour.

Johnston said two officers then shot dead the gunman, who had stolen two vehicles during his rampage.

"It was very clear at the onset that we had an individual that was randomly picking targets," he told a news conference.

Jim Schultz, a reporter for the Redding Record Searchlight newspaper, cited local resident Casey Burnett, who also said the gunman was "driving around and shooting randomly from his car."

"One dad told me he blocked the door of his daughter's kindergarten classroom as the gunman fired at Rancho Tehama school," she wrote, before quoting him as saying "I'm 32, I've lived my life. I wasn't going to let him hurt those little kids."

In a statement, California Governor Jerry Brown said he and his wife were "saddened to hear about today's violence in Tehama County, which shockingly involved schoolchildren. We offer our condolences to the families who lost loved ones and unite with all Californians in grief."

Meanwhile, US President Donald Trump appeared to tweet his condolences to the wrong shooting incident late on Tuesday.

"May God be with the people of Sutherland Springs, Texas. The FBI and Law Enforcement has arrived," he wrote.

Last week, in another mass shooting, a gunman shot dead 26 people at a church in Texas.

Last month, 58 people were killed and more than 500 wounded in a mass shooting by a lone gunman at a music festival on the Las Vegas Strip.

A day after the worst mass shooting in the state's history, locals are trying to make sense of what happened. Many find they have more questions than answers, reports DW's Michael Knigge from Sutherland Springs. (07.11.2017)