Bush Swiss trip canceled after complaints on torture | Europe | News and current affairs from around the continent | DW | 05.02.2011

A trip by former US President George W. Bush to Switzerland has been canceled over security concerns, after human rights groups said they planned to call for his arrest on charges of alleged torture. 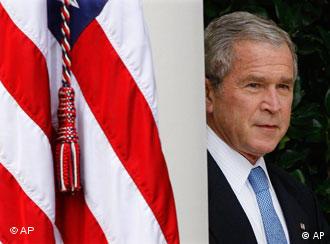 Rights groups say Bush should be behind bars

Former US President George W. Bush, under fire from human rights groups over allegations of ordering torture, has canceled a visit to Switzerland citing security concerns.

Several human rights groups, including Amnesty International, had said they were planning to ask Swiss public prosecutors to open a criminal investigation against Bush over the alleged mistreatment of detainees at the Guantanamo Bay detention camp.

The US detention center on the naval base in Cuba is used to hold and interrogate suspected Islamist terrorists captured in Iraq and Afghanistan.

Rights groups had also called for massive protests on the day of Bush's visit, which had been scheduled for next Saturday.

Bush had been invited to Switzerland to be the keynote speaker at a Jewish charity gala. Organizers have now canceled the trip due to security concerns around the planned demonstrations - not because of the risk of legal action against him.

But the groups, including Human Rights Watch and the International Federation of Human Rights, claim the cancelation of the visit was clearly linked to the growing pressure on Bern to hold Bush accountable for terror should he enter the country.

Bush has in television interviews and in his memoirs admitted that he himself had authorized the waterboarding of terrorism suspects - an interrogation technique that simulates drowning.

As George W. Bush returns to the public eye to promote his recently published memoirs, he is polarizing opinion. His book is unlikely to help heal the rift that emerged between the US and Europe while he was in office. (10.11.2010)