A convoy of gendarmes returning from a gold mine was attacked by unidentified armed men. Jihadists linked to al-Qaeda and the "Islamic State" (IS) often carry out violent acts in the country, displacing thousands. 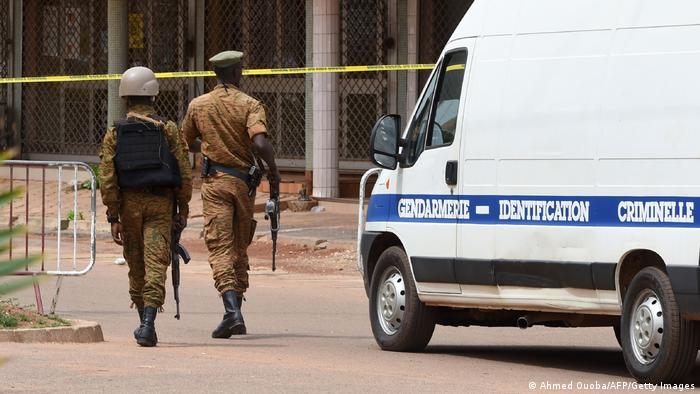 Several members of Burkina Faso's gendarmerie were killed in the attack

At least six people were killed in Burkina Faso after an attack on a convoy of gendarmes over the weekend, Burkinabe authorities said Monday.

The convoy was escorting vehicles returning from a gold mine in eastern Burkina Faso on Sunday when it was ambushed by a group of unidentified armed men.

"The ambush began with the detonation of an improvised explosive device as the convoy passed, followed by heavy gunfire," the gendarmerie said in a statement.

At least seven people were also wounded in the attack. Authorities said the convoy was on a stretch of road between the Sakoani and Matiacoali village in the Est Region when the incident occurred.

The attacks are frequently carried out by perpetrators linked to jihadist groups such as al-Qaeda or the "Islamic State." No group has yet claimed responsibility for the ambush.

The fight against Islamic extremism in West Africa

The rising death toll from the attack comes after the Norwegian Refugee Council NGO said on Monday that 275,000 people had been displaced because of a recent uptick in violence in the West African country.

The violence has prompted an average of 13,000 people a week to leave their home since April, the group said, with nearly 500 having died.

"Despite soaring conflict, the humanitarian operation to assist people in need is falling far behind. A critical shortage in aid funding, combined with a lack of capacity from local authorities, is preventing relief agencies like ours from responding in time," the NGO's Burkina Faso director Manenji Mangundu said in a statement.

The NGO called on the government to speed up its humanitarian response and appealed to authorities "to let us step in and support."

The group said many vulnerable families in Burkina Faso were forced to search for food, putting them at risk from an armed attack.

Burkina Faso's security forces have struggled to tackle the violence, with demonstrations taking place in recent months calling for a more effective government response against terrorism.

Other countries in West Africa are also facing instability due to terrorism and war. The three-border area connecting Burkina Faso, Mali and Niger — also known as the Liptako Gourma region — has seen increased violence in recent years, fueled in part by an armed insurgency in Mali that intensified in 2012.