For the first time since 1969, Germany has balanced its budget. Lawmakers in parliament approved the historic budget, despite repeated outcry from the opposition investment was more important than a "black zero." 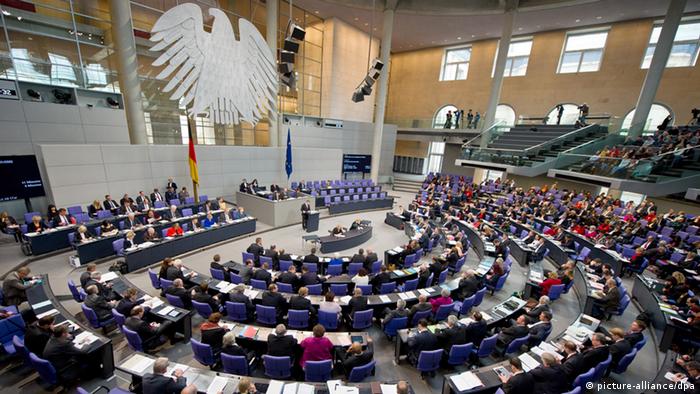 The Bundestag - Germany's lower house of parliament - approved the 2015 budget on Friday after a debate that has dominated domestic media in recent days.

German Chancellor Angela Merkel's government has celebrated next year's balanced budget - dubbed the "black zero" - as a victory not only for her one-year-old Grand Coalition government, but also as a historic step for which future generations will be thankful.

"All of us and even those who follow us will be measured by this," Finance Minister Wolfgang Schäuble said on Friday.

It is the first time that Berlin won't take on any new debts since 1969. Schäuble called the decision "a commitment to the future."

Under the agreed budget, Berlin has allotted nearly 300 billion euros ($374.5 billion), for spending 2015. An increase in tax revenues and low interest rates, as well as a 2.2-billion-euro rebate from the European Union contributed to the balanced books.

The budget faced stark criticism from the opposition but was in little danger of failing to win enough votes on Friday. Chancellor Angela Merkel's center-right and center-left coalition controls roughly 80 percent of parliament between the CDU/CSU's 49 percent of seats, plus another 30 percent from its center-left junior coalition partner the SPD. The opposition Left and the Greens each control only about 10 percent of the seats.

Cities, children and the education system were the "losers of the black zero," Left party politician Katja Kipping told German television broadcaster Phoenix ahead of the debate.

Her fellow party members repeated these calls, also adding that they wanted "a just taxation" of Germany's richer citizens. A study released earlier this year showed a significant widening of Germany's wealth gap between 2007 and 2012.

Opposition partners, the Greens, backed the Left, pointing to a lack of investment in infrastructure around the country and the need for more money to combat pollution.

Both Merkel and her cabinet have stressed the necessity of shoring up funds to maintian investor confidence and to gradually reduce the national debt. The government has also pointed to the need for financial flexibility given instability around the world. Not only has Germany seen a 64 percent increase in the number of refugees since 2012, but it has also committed itself to several costly military missions, including in Iraq and Ebola-stricken West African nations.

Berlin to give states up to 500 million euros for refugees

Faced with tens of thousands more refugees entering Germany this year, the federal government has announced it will give states more money for refugee services. The massive influx has strained a number of cities. (28.11.2014)