Monday's doubleheader saw Leverkusen tighten their grip on a top four place in the Bundesliga. While Moussa Diaby and Patrik Schick shone for Leverkusen against Frankfurt, RB Leipzig crashed in Mönchengladbach. 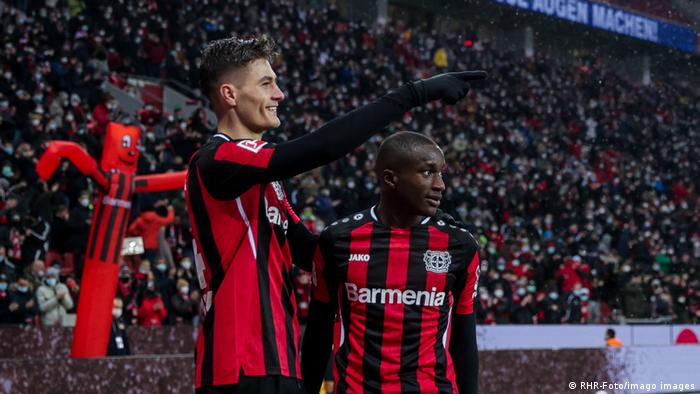 Schick and Diaby are building a connection at Leverkusen

Bayer Leverkusen's victory over Eintracht Frankfurt gives them a three-point cushion in the race for fourth. Meanwhile, 65 kilometers down the autobahn, Leipzig were overwhelmed by Borussia Mönchengladbach.

The star across the two games was Leverkusen's Moussa Diaby, who ended the night with two assists and played a key role. His speed and vitality a little too much for a lead-footed Frankfurt to handle, following their exertion in London on Thursday.

Paulinho and Patrik Schick got the goals for Leverkusen on night when the Czech forward showed his class with an extraordinary strike that VAR ruled out, only to score the vital second. The 26-year-old from Prague spent the 2019-20 season on loan at the Red Bull club and is developing a superb understanding with Diaby, who creates such problems from wide areas. Sardar Azmoun was good, too, filling the void still left by the injured Florian Wirtz.

The other team chasing Champions League football are Freiburg, who keep their noses in front of Domenico Tedesco's Leipzig; their impressive season under Tedesco suffered a jolt in Mönchengladbach, who held on with 10-men against Leipzig after two goals from Jonas Hofmann following the opener by Breel Embolo.

"We weren't on the pitch in the first half and lacked everything — intensity, physicality," said Tedesco, in a frank assessment of the defeat. "We lost the balls too quickly and didn't secure the balls up front either. At this stage of the season, that's a few too many gifts."

It was a bitter blow for Tedesco's side, who got one through Christopher Nkunku, but looked as jaded as Frankfurt — both suffering for their Europa League efforts. 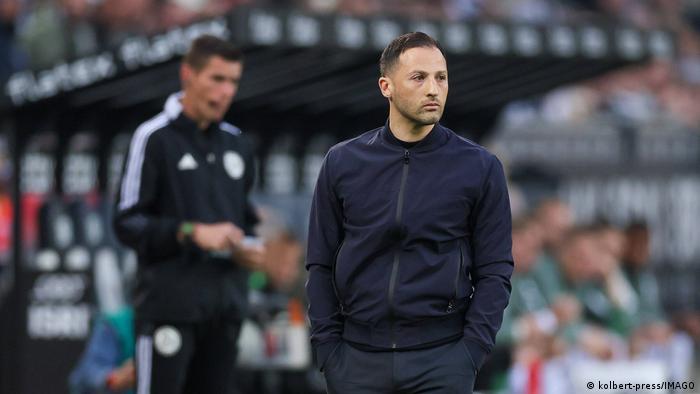 A sour defeat for RB Leipzig and Domenico Tedesco, whose side had been looking to move ahead of Freiburg

The Europa League now takes on an even greater significance for RB Leipzig, who take a 1-0 lead to Ibrox to face Rangers in their semifinal second leg. Frankfurt, too, will be looking to banish the memories of this tired performance ahead of a rousing night in their semifinal, against West Ham.

The top four race is one of the Bundesliga's most interesting and dramatic plot lines. It gets better: Freiburg sit fourth, one place and one point ahead of Leipzig, who are in fifth. Freiburg's next three fixtures: home to Union Berlin, away to Leverkusen and home to Leipzig. All in Freiburg's neighborhood in the league.

Fourth versus fifth — a Champions League playoff — on the final day of the season at Freiburg's new stadium is not impossible. With the German Cup final set to feature Freiburg and Leipzig again on May 21, this is a rivalry to spice up the end of the season. On this night, Diaby and Schick consolidated Leverkusen's relative comfort in third, as the race for the top four heats up below them.