Ingolstadt came from behind at the break to beat Darmstadt and close the gap in the hotly-contested relegation battle. Earlier, Hertha Berlin returned to winning ways with a 2-0 victory at home to Augsburg. 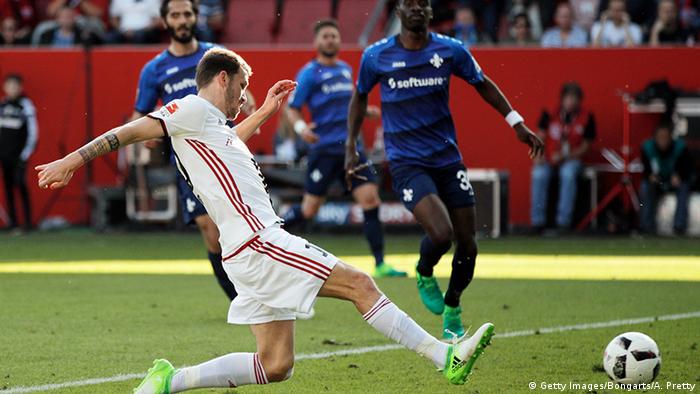 Markus Suttner's superb free kick completed an important comeback for Ingolstadt, who narrowed the gap at the bottom to one point, with a 3-2 win over Darmstadt.

The home side trailed 2-1 at the break with Mario Vrancic's double ending 746 minute scoring drought for Darmstadt on the road. But the left-back's free kick with 72 minutes gone beat Michael Esser and gave Ingolstadt's survival hopes a serious boost.

Ingolstadt's total domination early on was rewarded after 19 minutes when an intricate piece of football was finished off by Pascal Groß at the back-post.

But Darmstadt's character has been what has sustained them for two seasons in the Bundesliga, and they demonstrated it once again with a late first-half fight back.

Vrancic shaped up for the half-volley from distance and directed the ball into the far corner of the net. Five minutes later, the attacking-midfielder added his fifth of the season from the penalty spot.

Torsten Frings' side had spent most of the first 45 minutes of the back foot, and that continued into the second period. Even to stay up this season, the Lillies would have required a 15-point swing from the final six games.

Ingolstadt regained control and were eventually rewarded for more attacking menace. A game of pin ball inside the penalty box with 22 minutes left wasn't deal with and Cohen poked home from close range.

Maik Walpurgis' side sealed the points four minutes later when Suttner bent a left-footed free kick high into the net - his fourth league goal of the campaign. 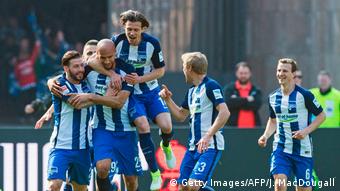 Hertha Berlin returned to a European position in the Bundesliga with a comfortable 2-0 win over relegation-threatened Augsburg.

The Berliners triumphed with goals from John Anthony Brooks and Valentin Stocker, their 10th home win from the last 13 in the German capital. The Bavarians remain in trouble third-bottom of the table, without a win in five matches.

A set piece from Swiss attacking-midfielder Stocker on 12 minutes picked out Brooks 10 yards out, and the American international headed past Marwin Hitz.

Augsburg coach Manuel Baum was forced into a pre-game change when Raul Bobadilla pulled up in the warm up. The Argentine striker was replaced by Icelandic front man Alfred Finnbogason, who started in midweek's 3-2 home defeat to Ingolstadt.

Hertha continued to look dangerous on the break, and on 37 minutes, Pal Dardai's side doubled their advantage at the Olympic Stadium. Salomon Kalou beat the offside trap and unselfishly teed up Stocker to tap home into an empty net.

Augsburg rarely threatened in the hosts in the second half and Hitz made a couple of solid saves to prevent the hosts from adding to their advantage.

Bayern have Boris Becker, Tom Hanks has been spotted at Dortmund but it's Darmstadt who have the biggest celebrity fan of them all. The Lillies are the only European club followed by Barack Obama on Twitter. (15.02.2017)

Bundesliga: What to watch out for on Matchday 28

All eyes will be on Der Klassiker on Saturday evening as Bayern Munich host Borussia Dortmund, but the relegation battle is also heating up. Meanwhile, there's more than just bragging rights at stake in the Rhine Derby. (06.04.2017)