Bundesliga: How will Frankfurt adjust as Rebic completes departure of front three?

The deadline day departure of Ante Rebic to AC Milan means Eintracht Frankfurt have now lost every member of last year's brilliant front three. The Eagles have had to rebuild before, but can they do it again this season? 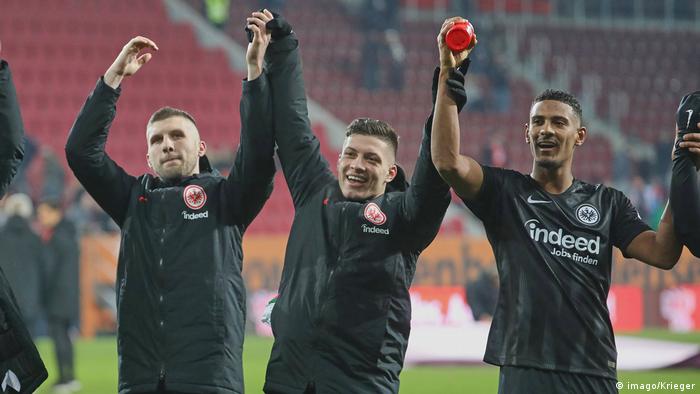 The last of the "Buffalo Herd" has left Germany. After Sebastian Haller's move to England and Luka Jovic's exit for Spain, Ante Rebic has become the last member of the devastating strike trio to migrate to pastures new, with Italy his choice of location.

The three forwards caught the imagination of fans and clubs across Europe with their rampaging displays for the Eagles in the Europa League and the Bundesliga last term, hence the collective name given to them by sections of the German press.

Rebic, the Croatian wide forward who featured in the 2018 World Cup final, is probably the member of the three who most resembles the powerful American beasts. Aggressive and direct, the 25-year-old proved an excellent foil to the lithe, graceful, intelligence of Haller's holdup play and Jovic's poaching instincts.

"It was his big wish to go to Italy and launch himself into a new challenge," said Frankfurt sporting director Fredi Bobic shortly before the two-year loan deal was confirmed on Monday, with the club having made similar noises when the other two departed.

Old with the old, in with the new

But at the same time, Bobic confirmed Portuguese international striker Andre Silva would be moving the other way. It was a typically unfussy move from the former Germany striker, who has made a string of savvy deals since taking the position three years ago.

As well as the huge profits he's brought in for Haller (€32 million), Jovic (€53 million) and Rebic (likely to be about €30 million if Milan agree a permanent deal) Bobic has had to cope with the loss of other key men like goalkeeper Lukas Hradecky, key creator Kevin-Prince Boateng and club talisman Alexander Maier in recent years, as well as German Cup-winning coach Niko Kovac, who left for Bayern last summer.

All have been replaced with minimal fuss and minimal outlay, with Eintracht's league position having improved each of the last few seasons, along with memorable cup runs. The question is whether he, and Kovac's replacement, Adi Hütter, can keep performing one of the most difficult tricks in football.

Rebic was sent off in his last Frankfurt game in the Europa League against Strasbourg and was hauled off in the first leg of that tie after Hütter was appalled by his lax attitude, the Croatian's disappointment at the loss of his strike partners all too evident. Such frustration from key players is a risk for a club willing to sell stars but Hütter and Bobic clearly believe in putting the team first.

As with the Buffalo Herd, Frankfurt's new attacking arrivals all have something to prove. Just like Haller, who had excelled in the Dutch league, former Wolfsburg striker Bas Dost will be keen to demonstrate that a record of 76 goals in 84 league games for Sporting Lisbon is a reflection of his ability rather than the lack of competition in the Portuguese top flight. A headed equalizer off the bench 12 minutes into his debut against Fortuna Düsseldorf on Sunday wasn't a bad way to start.

"The team and the whole club have welcomed me with open arms. You feel happy here right from the first day, which has really helped me," said the powerful Dutch target man.

The man who scored the winner on Sunday is another who has already started to profit from the increased opportunities afforded by the departure of Frankfurt's star trio, Goncalo Paciencia. The former Porto man joined the Eagles last summer but missed the first half of the season through injury and then found it difficult to displace the established attacking trio. But a fine start to the current campaign has seen him hit five goals already, three in the Europa League and two in the Bundesliga.

The other major attacking arrival in the offseason was Jovic's Serbian compatriot Dejan Joveljic. The 20-year-old arrived as a relatively unknown quantity and has mainly been used off the bench by Hütter so far.

Though the new arrivals bear some of the hallmarks of the departed big beasts, there are also distinct differences. Dost is a much more traditional tall target man than Haller and should benefit particularly from the crosses of a rejuvenated Filip Kostic, while Pacienca looks comfortable linking play.

Is seems Hütter may initially look to partner the two upfront in a physically imposing duo that perhaps lacks a little for pace, allowing Joveljic and Silva some time to get up to speed with the league and their surroundings. The international break looks well timed in that respect.

But with Arsenal and Borussia Dortmund the next two visitors to the Waldstadion after Frankfurt's trip to Augsburg on September 14, Bobic and Hütter will be hoping their new-look strike force can hit the ground running. But perhaps quite not so well that they have to sign a whole new strike force again in 2020.

Luka Jovic, Sebastien Haller and Ante Rebic all scored to help Eintracht Frankfurt reach the Europa League last 16. In this form, there may not be a team in Europe that would want to face Adi Hütter's side. (21.02.2019)