Bundesliga side Eintracht Frankfurt have lost one of their key strikers, albeit for a hefty fee from a Premier League team. Despite many positive aspects to the transfer, the move does send the wrong message. 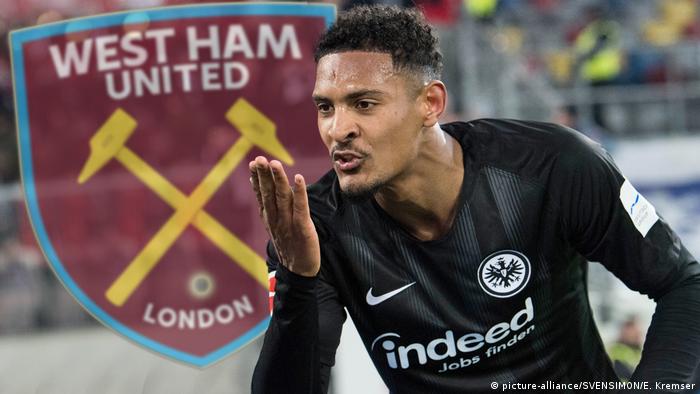 On the surface everyone is a winner in Sebastien Haller's move from Eintracht Frankfurt to Premier League outfit West Ham. Frankfurt are up-selling for significant profit, the Frenchman is set for a financial windfall in London and the Hammers have signed a striker of immense quality, who could solve their problems up front.

Peel back a few layers though, and the picture isn't quite as rosy for Frankfurt, who have now lost Luka Jovic and Haller — their two most prized assets from a fairy-tale season — in the same summer.

Fredi Bobic, Frankfurt's head of sport, deserves credit for the transfer market masterstrokes that have generated a combined €110 million ($123.4 million) in revenue for the club this summer. But how many more hidden gems can Bobic unearth, and how costly will Frankfurt's approach of constantly selling their best players be?

"From a sporting point of view, it would be a big loss for us," head coach Adi Hütter told kicker when asked about the interest in the French forward following Jovic's move to Real Madrid.

"If he says ‘okay, I would like to leave the club because the whole package is right', it is the player's decision. But we're trying to make [Frankfurt] appealing too."

The big issue for Frankfurt, and an increasing concern for the Bundesliga as a whole, is that despite an incredible campaign that ended in European qualification, Eintracht were still unable to be as appealing to Haller as a West Ham side with limited prospects of climbing out of mid-table.

In 2018-19, the Eagles were the talk of Europe. Their thrilling Europa League campaign and passionate fan base stole the hearts of football romantics worldwide, and provided more success (after their German Cup win the previous season) for the club to build on and break the cycle of yo-yoing between Germany's top two tiers. Much of that stemmed from an attacking trio that stole the headlines both at home and abroad.

Ante Rebic, Jovic and Haller's blend of pace, power and prolific finishing made them the most-feared frontline trio on the continent. Between them, they scored 57 of Frankfurt's 89 goals in all competitions. In letting two of the three leave the club – for now – Eintracht have risked undermining the progress that has seen them knocking on the door of a top-six finish.

In the eyes of Frankfurt fans, Jovic's departure was inevitable, but the majority retained hope that Haller would stay. Staving off interest in the Frenchman was a chance for the Eagles to underline their ambition, but letting him join a side without European football has sent the wrong message.

Haller's transfer will see profit pumped back into the club, but it also leaves Frankfurt reverting to the same contented position so many mid-table sides occupy. On the precipice of something special, Frankfurt have put their long-term ambitions at risk for short-term gains.