Bundesliga: Cologne left behind as other promoted clubs find a way

This time last year, Cologne, Paderborn and Union Berlin were scrapping away in the second tier. On Sunday the three promoted sides all had the chance to get closer to their aims. Once again, Cologne were the fall guys. LLLLDL and WLLDLW. Though it may look like the name of an unpronouncable Welsh village, it's actually the league records of the Bundesliga's last two clubs, Cologne and Paderborn, since they met on October 20 and Cologne won 3-0.

That victory, over the club that won automatic promotion with them last term, should have served as a spur for Cologne to kick on but it's done the opposite. Paderborn have since won seven of their eight total points following an injury-time win over Werder Bremen on Sunday. Cologne have picked up a single point and now sit rock bottom.

"We made exactly the mistakes that we have to avoid and that we spoke about," said Cologne coach Markus Gisdol, the fourth man to hold the post in the last two years, after their 2-0 loss to Union Berlin. "Union showed us how to get out of our situation," he continued, in a nod to the capital-city club who finished below Paderborn and Cologne in the second tier last term but won promotion by beating Stuttgart in the relegation playoff.

Union play to their strengths

The performance of Union, who have won their last four home games without conceding, was typically disciplined, unfussy and effective. Urs Fischer's side played to their strengths, rode out a decent early Cologne spell and unsettled their opponents with direct but precise service to their two powerful frontmen. One of them, Sebastian Andersson, scored both goals and now has eight league strikes, 44 percent of his team's total.

Union's success has been a surprise built on solid foundations and a strong sense of identity on and off the pitch. Cologne's struggles are not a great surprise, and their foundations appear to be made of a particularly fragile sand but they do have an identity. The Billy Goats are a storied club with a wage bill, transfer budget and fanbase to match. But those things don't win matches.

As a result, their fans have become accustomed to relegation, having seen sides with various shades of talent go down six times in the last 21 years. And the club once again looks fractured. There are rifts between the board and the fans, and the constant chopping and changing of coaches suggests a muddled thinking that has transferred itself to the pitch. The early success of their most recent firing - Achim Beierlorzer - at fellow strugglers Mainz (two wins from three) rubs salt in that particular wound.

As did substitute Sven Michel's late winner at Werder Bremen a couple of hours after Cologne's latest low. Paderborn were not especially impressive in their win but they were resolute and they endured against a Bremen side lacking any fluency. In truth, despite the recent uptick, Paderborn still look short of quality in key areas, but they aren't short of spirit. 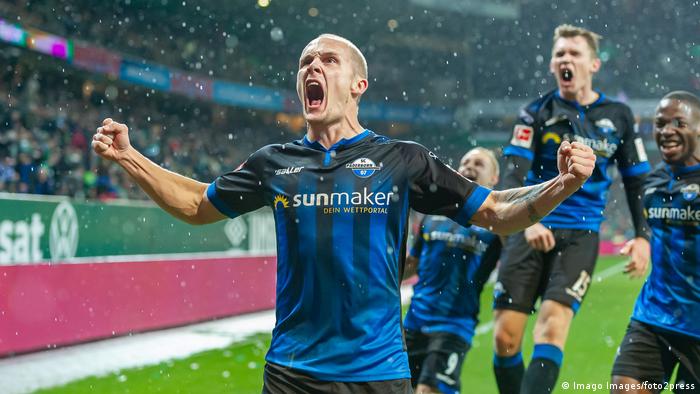 As recently as 2017, the north-western club were finishing 18th in the third tier and saved from further relegation only by the travails of 1860 Munich. But their remarkable rise since that point looked to have seen them reach the pinnacle too quickly, with just one point won in their first eight games.

But the strength forged in adversity has given Steffen Baumgart's men hope of survival despite modest resources as they leapfrog Cologne. For Union, their hope is now of even loftier achievements despite their own lack of funds. For the third of this season's new boys, it's not clear where any sources of hope lie.

Bundesliga upstarts Borussia Mönchengladbach looked set to suffer a sobering admonishment at the hands of a dominant Bayern Munich. But Marco Rose’s team rediscovered their qualities to produce a stirring comeback. (07.12.2019)