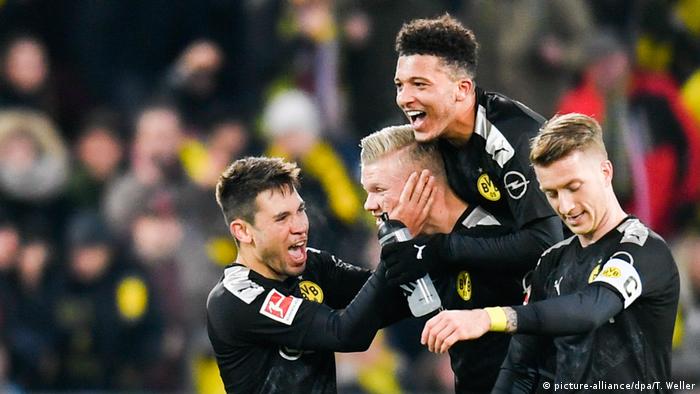 19-year-old Erling Haaland scored a scarcely believable 20-minute hat-trick to rescue Borussia Dortmund on a fairytale first appearance for the club. The Black and Yellows found themselves 2-0 and then 3-1 down away at Augsburg after the hosts exploited some typically poor defending with some impressive football of their own - Marco Richter with a long-range screamer in between two neat moves finished off by Florian Niederlechner. But after Julian Brandt had kept Dortmund in the game, second half substitute Haaland single-handedly turned the tie on its head, his three goals complementing a Jadon Sancho strike as Dortmund ran out 5-3 winners. What a game. What a signing. What a debut. What a player.

RB Leipzig "came back from the dead" (see fans below) against Union Berlin to extend their lead at the top of the Bundesliga. Newly-promoted Union took a shock halftime lead through Marius Bülter, but Timo Werner (who else?) drew RB level after the restart with a thunderbolt half volley from the edge of the box. Marcel Sabitzer reacted fastest in the six-yard box to put Leipzig ahead six minutes later, before Werner scored a second to wrap up the points. 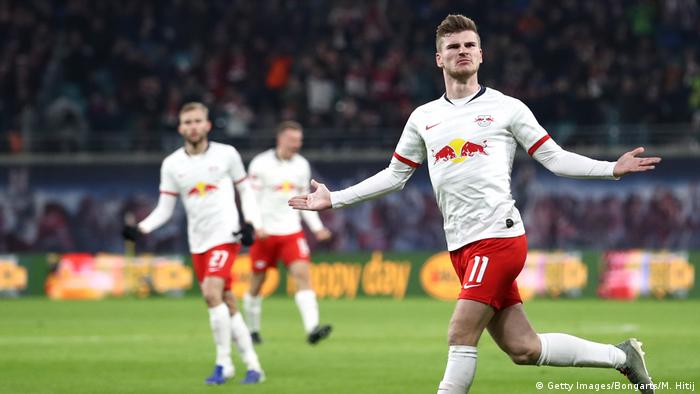 Timo Werner's first goal of the day was a sumptuous hit

In a battle of two coaches who have made strong starts to their respective clubs, it was David Wagner who got the better of Marco Rose in the first Bundesliga game of the new decade. The arrival of Michael Gregoritsch on loan from Augsburg ultimately proved the masterstroke. The attacker set up one, scored another and cleared one off the line in a game that entertained on Friday night. Gladbach didn't play badly, they just lacked punch in the final third and didn't play as well as the hosts. Sometimes, football is a simple game.

After a somewhat drab first half, Bayern turned on the style in the second against a Hertha Berlin side that looked as soft as butter. Thomas Müller scored one and assisted another, while Thiago also impressed. Robert Lewandowski got on the scoresheet thanks to converting a penalty that looked a soft call. The Pole now has 31 goals in all competitions this season. Tidy. Bayern are now just four points off RB now.

Cologne gave their survival hopes a huge boost with a 3-1 home win over Wolfsburg, moving them three points clear of the relegation zone. A Jhon Cordoba brace gave the Billy Goats a 2-0 half time lead before captain Jonas Hector made it three just after the hour mark. Renato Steffen pulled one back for Wolfsburg shortly after but the points remained in the Rhineland as Markus Gisdol secured a fourth win in a row.

— Frankfurt back to winning ways

After ending 2019 with four straight defeats, Eintracht Frankfurt started 2020 with a much-needed 2-1 victory away at Hoffenheim. Striker Bas Dost gave the Eagles the lead in the first half before Konstantinos Stafylidis scored a brilliant equalizer for the hosts after the restart. Frankfurt weren't deterred though, and restored their lead through a Timothy Chandler header. In the end, they could have scored more as Mijat Gacinovic, Danny da Costa and Filip Kostic all missed late chances. Bayern Munich were celebrating again, but for the first time in Berlin in the league since 2016

"That's why you bought me."
Haaland to Dortmund sporting director Michael Zorc after his scoring heroics.

"I didn't feel like he was ready to help us today."
BVB coach Lucien Favre on the absence of striker Paco Alcacer, fueling rumors of a transfer.

"Yes, I saw that he scored a hat-trick. I'm happy for him. Great."
RB Leipzig CEO Oliver Mintzlaff when asked about former RB target Erling Haaland.

"Why are the rules made by people who have never played the game and don't have a clue what happens on the pitch?"
Werder Bremen coach Florian Kohfeldt on Niklas Moisander's red card for dissent in Düsseldorf.

"He has scored 20, that says everything about him. Now his goal has to be to score 40. Then we'll be happy."
Marcel Sabitzer on Timo Werner's goal tally

"I didn't know if it was Cristiano Ronaldo or Timmy."
Frankfurt midfielder Mijat Gacinovic about teammate Timothy Chandler's header 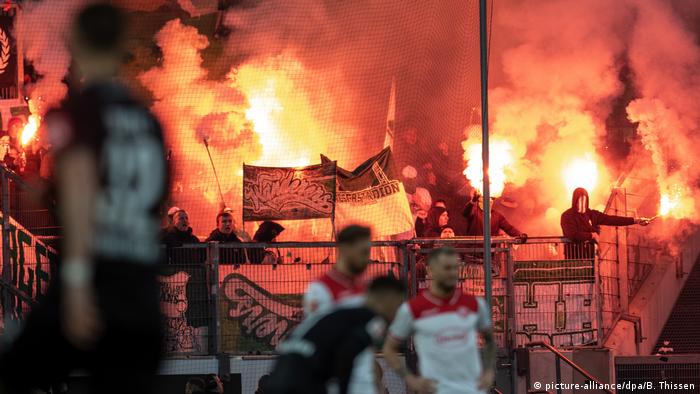 - Suat Serdar scored the first Bundesliga goal of the new decade, and in doing so became the leading scorer for Schalke this season with 7 goals.

- Erling Haaland became the second youngest ever player to score a Bundesliga hat-trick, aged just 19 years and 181 days. His first goal came just 183 seconds after coming on as a substitute.

- RB Leipzig have scored at least twice in 13 games in a row in all competitions. The only other club to have achieved this in professional football this century is Bayern Munich, between November 2013 and March 2014.

- RB Leipzig have scored three goals in nine Bundesliga games in a row — a Bundesliga first.

- The 500th Bundesliga goal this season was scored by Cologne's Jhon Cordoba.

RB Leipzig might be top of the Bundesliga but the protests against the Red Bull-backed club aren't going away. This weekend, traveling Union Berlin fans dressed all in black staged a "funeral march" for football through the city of Leipzig, mourning what they called "the death of football in Leipzig." They carried with them a coffin and several white crosses with messages such as "participation," "tradition," "50+1," "emotions," and "honest football."

Upon arrival at the Red Bull Arena, they placed the crosses and coffin as a shrine outside the away end, before leaving the away section empty until kick-off and conducting a 15-minute atmosphere boycott.