Protests against Prime Minister Borissov's government show no signs of abating amid accusations of corruption. President Rumen Radev has backed protesters after his offices were raided by armed officers last week. 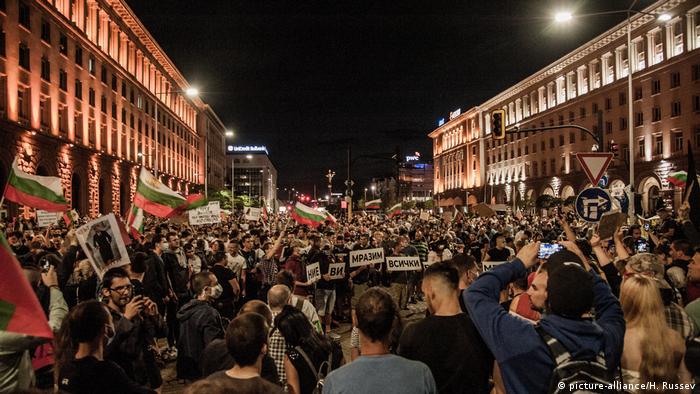 Thousands of Bulgarians took to the streets of Sofia on Friday for the ninth day in a row to demand the resignation of Prime Minister Boyko Borissov and his entire government.

Earlier this week, a number of key cabinet ministers in Borissov's government stepped down in the hopes of appeasing protesters, but the resignations appear to have done little to ease tensions in the Bulgarian capital.

Demonstrators are unhappy over corruption and suspicious connections with oligarchs within the conservative-nationalist coalition government, which has been in power since May 2017.

Peaceful protests also took place in the Black Sea city of Varna and the city of Ruse, which is located on the Danube.

The protests first broke out after heavily armed security officers raided the offices of President Rumen Radev, a vocal critic of the government's record on corruption. Radev has accused Borissov of having "links with the oligarchs."

Demonstrators were also demanding the resignation of Bulgaria's chief prosecutor Ivan Geshev, the man behind the raids on Radev's offices.

The president's legal affairs and anti-corruption secretary, as well as his security and defense advisor, were all arrested and held for questioning.

The president and prime minister are now at loggerheads. Radev has urged protesters to continue to vent their anger, demanding citizens chase the "mafia" out of government and the prosecutor's office.

Borissov next week faces a parliamentary vote of no-confidence demanded by the opposition Socialists. Nevertheless, it is a vote he is expected to survive.

The next parliamentary elections are due to take place in the spring of next year.