Authorities in northwest England have said damage to a reservoir dam near Whaley Bridge "poses a significant threat to life." Residents have been told to expect to stay away from the area for several days. 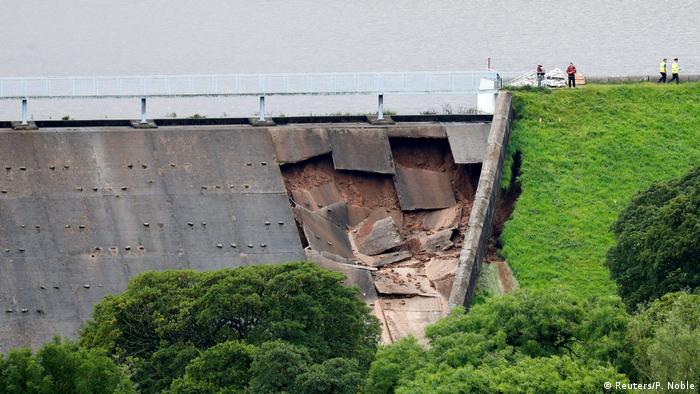 British authorities have ordered 6,500 people in northwest England to evacuate a town over concerns that the dam wall of a reservoir could burst following days of heavy rain.

The Environment Agency has issued a severe flood warning for the area, saying levels in the River Goyt, which runs through the town, could rise rapidly.

Police have advised residents to gather at a nearby school or stay with family and friends, and to take pets and enough medication for a number of days.

"We understand that there will be some concern around not being able to return home. However, our priority is to ensure people are kept safe and well and are not taking unnecessary risks," Derbyshire police said.

"This is not a decision that has been taken lightly and we appreciate that there is significant impact on this community, however, this is an unprecedented, fast-moving, emergency situation."

The 19th-century dam wall of the Toddbrook Reservoir above the town has been damaged by several days of rain this week following a heat wave that struck large parts of Europe.

Mohammad Heidarzadeh, an engineering expert from Brunel University in London said the dam's damaged spillway could be "fully broken" within hours.

"Due to heavy rainfall in Whaley Bridge area, the spillway is now broken and a big chunk of its concrete structure is damaged," he said. "If the spillway is fully gone, the embankment dam will be washed
away very rapidly, which could cause a massive flood."

Heidarzadeh also lamented the lack of investment in old infrastructure, endangering lives. In a tweet he said: "The concrete Spillway was built around 50 years ago and was almost at the end of its lifetime. This incident highlights the need for rehabilitation of old infrastructure! We need more investment for safety of our people!"

Climate change and the resulting heatwaves that are sweeping Europe are increasing the risk of making the continent's most important waterway impassable for longer periods — a threat that's worrying businesses. (01.08.2019)

Russia's military will join the combat against wildfires raging in Siberia as they rip through several remote regions, Kremlin officials said. The fires are affecting Arctic snow, a climate expert told DW. (31.07.2019)

Global warming is fast becoming a concern for the wine industry. But while traditional wine-growing regions might only yield raisins in 30 years' time, other areas around the world are starting to embrace viticulture. (01.08.2019)