Staff shortages and delivery problems caused by a COVID-19 app mean that some of Britain's favorite products are off the shelf for now. The government has moved to downplay the reported supply disruption. 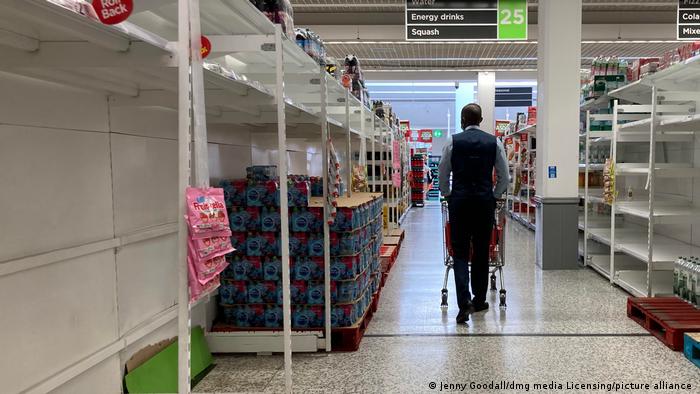 Newspapers carried front pages of bare shelves as it emerged that as many as 600,000 British workers had been asked to self-isolate, according to official government data.

The term "pingdemic" comes from an official National Health Service app that "pings" users when they have come into contact with a positive coronavirus case.

They then receive a message advising them to stay at home for 10 days.

Critics say the app's technology is too sensitive, incorrectly ordering thousands of workers to quarantine.

Authorities in the UK admit that many people have deleted the app to avoid disruption.

Sainsbury's, the country's second-largest grocery giant by turnover, said its staff were trying to get products on the shelves "as quickly as they can."

Iceland, a discount retailer, said it had closed a number of stores due to staff shortages.

Co-op said it was "running low on some products," and German retailer Lidl said the situation was becoming "increasingly difficult" and was starting to have an impact on operations.

It comes after the British Meat Processors' Association said on Wednesday that food supply chains were "right on the edge of failing" as result of work absences.

A number of gas stations have also seen a drop in supplies owing to the shortage of HGV drivers, who must self-isolate when coming from France.

British Business Secretary Kwasi Kwarteng told Sky News that the government was "very concerned" about the situation but disputed that supermarket shelves were bare.

The government has refused to tweak the technology amid concerns of rising infections.

On average, as many as 50,000 new cases are being reported each day.

But the UK's vaccination drive has been one of the fastest in the world with some 88% of adults receiving one dose, and nearly 70% now fully vaccinated.

Despite the very high caseload, there were just 73 COVID-related deaths in the UK on Wednesday.