The UK's foreign secretary, Philip Hammond, has reopened his country's embassy in Tehran, after it had been closed for almost four years. This follows a deal with Iran to curb its nuclear program. 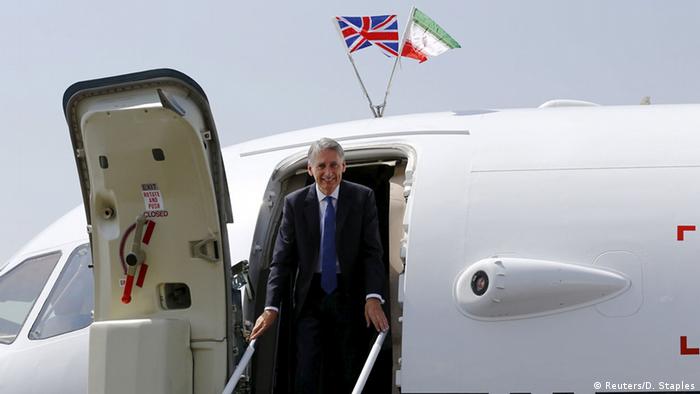 Philip Hammond's arrived in Tehran weeks after the Islamic Republic reached a deal with Britain, the other four permanent members of the United Nations Security Council and Germany to curb its nuclear program. Hammond announced his arrival in the Iranian capital in a posting via his verified Twitter account.

Under the terms of the P5+1 deal, sanctions imposed by the European Union, the United Nations and the United States are to be gradually lifted in exchange for Iran agreeing on the long-term curbs, which are mean to prevent Tehran from developing the capacity to produce a nuclear weapon.

While the United States and its Western allies have long suspected that Iran could be using its nuclear program as a cover to develop a nuclear bomb, Tehran has consistently insisted that the program is for peaceful purposes only.

"Four years on from an attack on the British embassy, I am today re-opening it," Hammond said in a statement released prior to his trip. "The Iranians will simultaneously re-open their embassy in London. Our relationship has improved since 2011."

The UN Security Council has endorsed Iran's nuclear program. However, sanctions will be lifted only after the International Atomic Energy Agency verifies that Tehran has taken important steps outlined in the agreement. (20.07.2015)